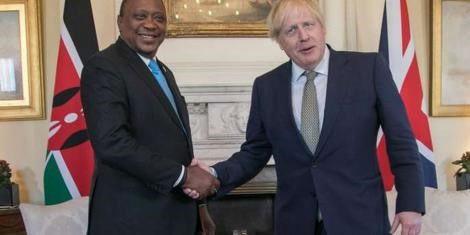 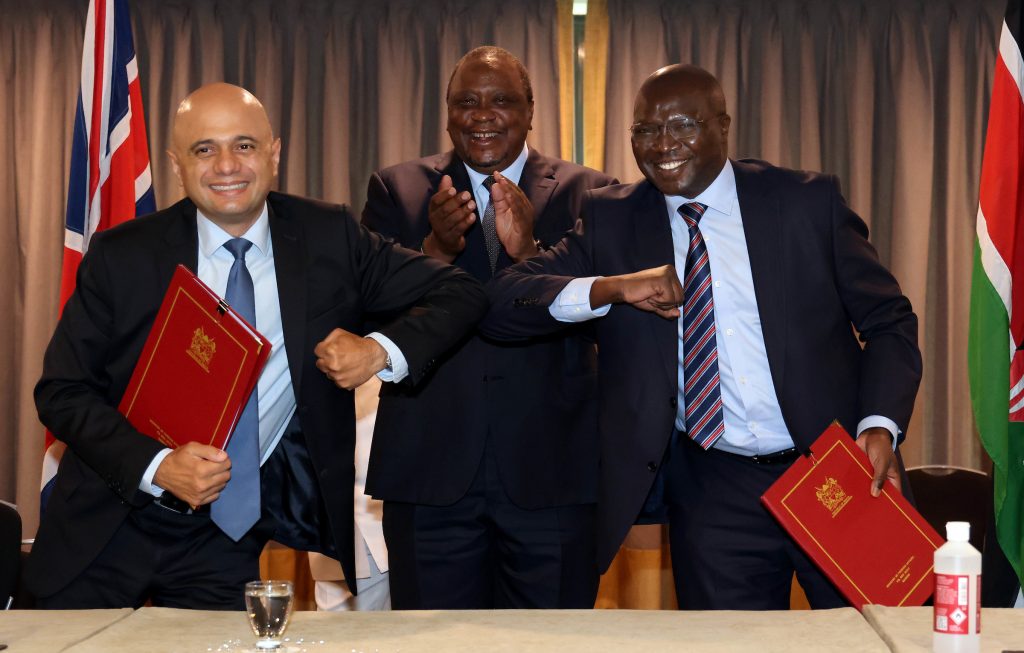 Health and social care Secretary Sajid Javid signs a Memorandum of Understanding on healthcare with Kenya’s cabinet secretary for Labour Cooperation Simon Chelugi at the Royal College of Physicians, with President Uhuru Kenyatta in attendance

Unemployed nurses in Kenya are to be offered work in health services across the UK, as part of a new arrangement between the two nations' governments.

The deal, backed by Kenyan president Uhuru Kenyatta, will see nurses and health workers in the African country currently without jobs given a “special route” to work in the UK for a fixed period.

Further details on the scheme are set to be confirmed in the next few months, but ministers said both countries would benefit from the arrangement through the sharing of experience and knowledge across health services.

The latest collaboration between Kenya and the UK Government comes through the signing of a Memorandum of Understanding on Thursday. 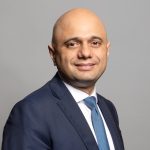 Health and social care secretary Sajid Javid said: “Our healthcare agreement will make the most of UK and Kenyan health expertise which will be beneficial to both countries, with the exchange of knowledge and training which will provide first class healthcare.”

He added that the UK’s relationship with Kenya had been strengthened by “working closely” during the pandemic and by sharing UK vaccine doses. Meanwhile, Jane Marriott, the British high commissioner to Kenya, said: “Our health partnership with Kenya is 30 years old and growing stronger by the month.

“This new agreement on health workers allows us to share skills and expertise even further, and is a fantastic opportunity for Kenyans to work in the UK.” 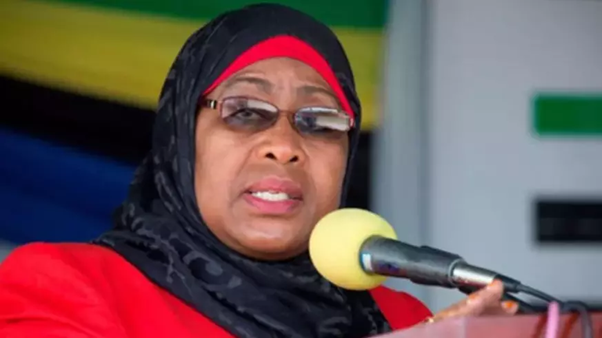 Tanzania’s President Samia Suluhu Hassan on Monday morning arrived in the country on Monday, August 2 to start a two-day State

visit.  She was received at Kigali International Airport by Vincent Biruta, the Minister of Foreign Affairs and Cooperation.

On her first day, President Suluhu will be received by her host, President Paul Kagame at Urugwiro Village, for a tête-à-tête followed by bilateral talks.

The Heads of State will then address members of the press and witness the signing of several bilateral agreements.

Later in the day, President Kagame is slated to host the visiting president and her delegation for a State Banquet at the Kigali

According to the programme, on the second day, the two Heads of State are expected to visit several companies in various sectors

including the Special Economic Zone which is  home to 120 companies with activities ranging from manufacturing, agro-processing

and education among others.

The overall purpose of the visit, according to officials, is to strengthen ties between the two neighbouring countries. Some of the

major Tanzanian businesses operating in  Rwanda include Azam Group, Bakhresa, Matelas Dodoma, among others, while Rwandan

companies like Sulfo Rwanda, and  Pharmalab, have established footprint in Tanzania.   By Collins Mwai, NT 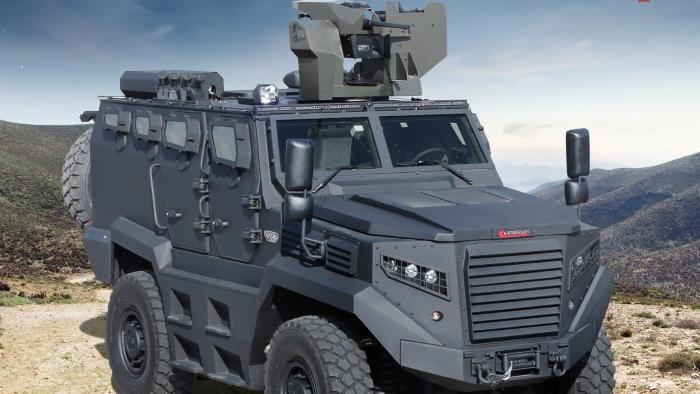 Turkish armored vehicle manufacturer Katmerciler announced last week that it has signed a $91.4 million contract with Kenya’s Defense Ministry to provide the African country with 118 4x4 Hizir tactical armored vehicles. The delivery is expected to begin in 2022 and run through the end of 2023.

The Overt Defense website said that the Hizir, which was designed with a capacity of nine personnel, has been optimized for high performance under intensive fighting situations in rural and urban regions, with a high level of mine and ballistic protection.

The Hizir is fitted with a Turkish-made Aselsan SARP turret. Depending on the operational requirements, the turret can be equipped with a 12.7mm machine gun, 40mm automatic grenade launcher or 7.62mm machine gun.

It has advanced capabilities and options such as fire-on-the-move capability, day and night imaging, automatic target tracking, a laser range finder for accurate ballistics, last round warning and manual backup, according to the website.

The Hizir has nine gun ports, four on each side and one on the rear door. The vehicle is also equipped with a smoke grenade launcher on its roof, the report said. Source: Israel Defence 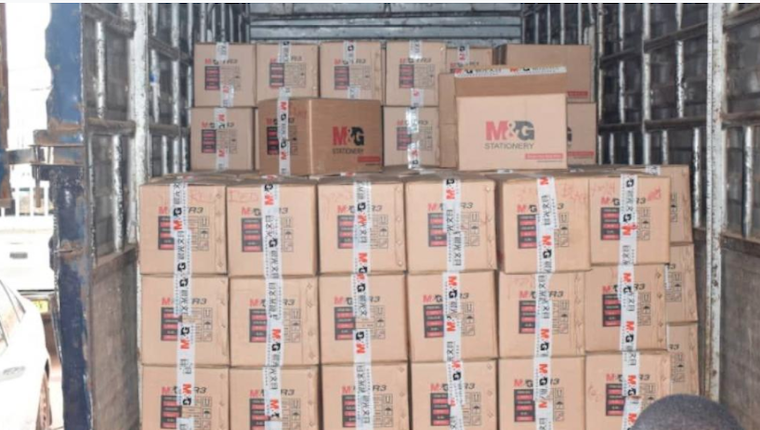 The impounded smuggled pens. Photo via The Observer

Bakashabaruhanga, who donned full military attire was reportedly driving a truck registration number, UAE 050F accompanied by a minivan registration number UAZ 637N, along the Mukono-Kayunga road. Both vehicles were full of merchandise. Once stopped, Bakashabaruhanga confidently flashed a Uganda People’s Defense Forces (UPDF) identity card which was later ascertained to be fake.

According to Julius Nkwasire,  the assistant commissioner in charge of field services, the URA team immediately contacted their counterparts in the UPDF to "report a soldier caught with smuggled goods."

The army refuted Bakashabaruhanga’s credentials, prompting his arrest. Nkwasire revealed they also arrested a one Emmanuel Kwesiga who is believed to be part of the syndicated crime network. He added that investigations were still ongoing and all the culprits will be presented in courts of law.

UPDF spokesperson, Brig Flavia Byekwaso condemned acts of abusing the military uniform, saying this is a different offence committed by Bakashabaruhanga. In her statement, she called on the public to be vigilant and report all such masqueraders who set out to tarnish the name of the UPDF.

“This is a warning to all those involved in misusing the UPDF uniform, these are matters regarding national revenue which is much needed by the government in this pandemic," Byekwaso cautioned. "We shall stand to deal with the culprits regardless of who is involved.”

Nkwasire noted that URA has enhanced customs intelligence and surveillance throughout the country to curb smuggling emphasizing that all those involved should stand warned. URA loses about Shs 985 million per day to smuggling.

In the financial year just ended, URA recovered Shs 67.73 billion from 5,823 seizures in operations, according to commissioner general John Rujoki Musinguzi. But URA officials as well as police officers manning crossing points have severally been implicated by traders for aiding the smuggling.

URA has put in place several measures to fight the vice, obliging the ongoing installation of non-intrusive inspection cargo scanners at border points. Other measures include the electronic cargo tracking system, as well as the digital tax stamps.

According to URA, the cargo scanners have enhanced efficiency, with the customs department now able to inspect over 1,400 consignments daily at Malaba and Busia points. - URN/The Observer