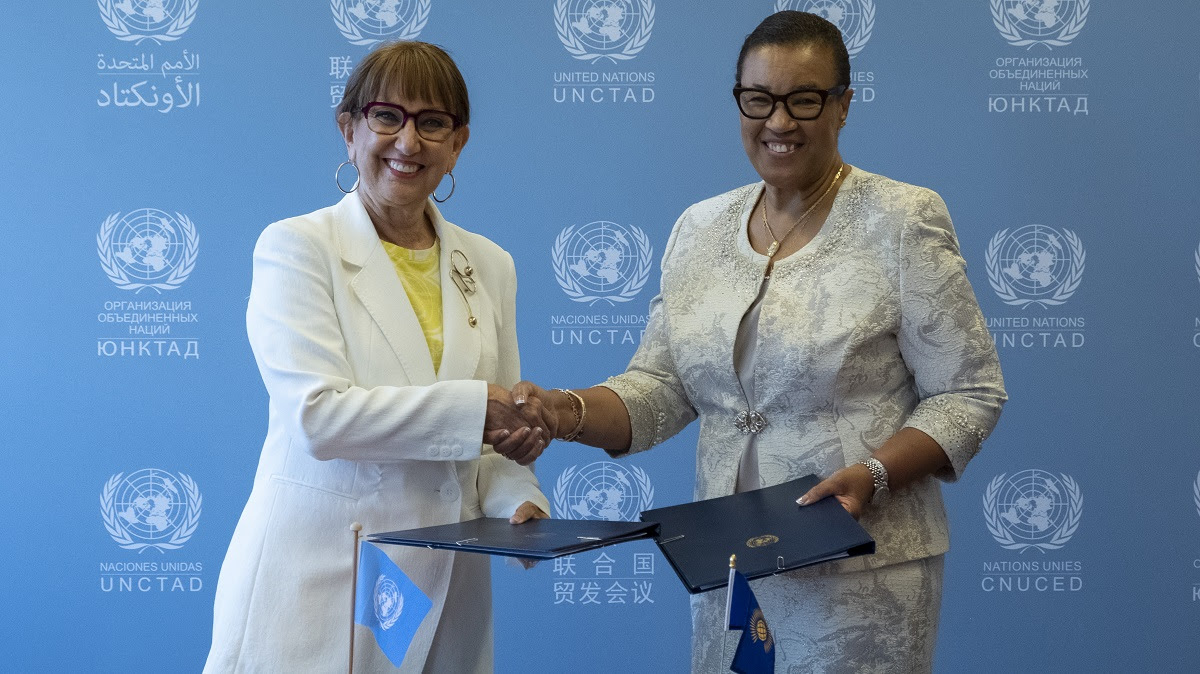 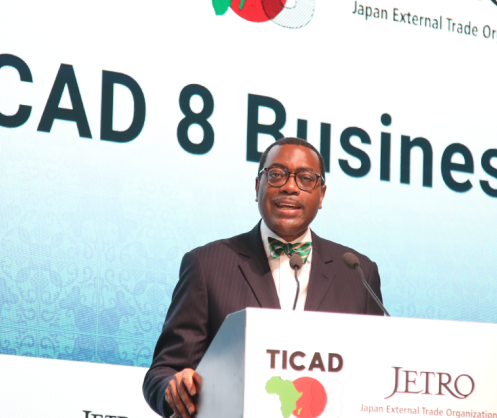 Adesina commended the Japanese government and private sector for their strong support to Africa’s development.

He told Japanese businesses to assess Africa’s investment opportunities based on facts and evidence, and not on perceptions.

The Bank group head said: “In 2020, Moody’s Analytics performed a 10-year cumulative assessment of global infrastructure debt default rates, by region. It found that Africa was the region with the second lowest cumulative default rate, after the Middle East. That is proof once again that infrastructure as an asset class in Africa is solid, secure, and profitable.”

Twenty African heads of state are attending the conference in the Tunisian capital of Tunis from the 27th to 28th of August.

Japanese officials and business leaders, and heads of international organizations are also taking part in the conference.

Speaking by video link, Japanese Prime Minister Fumio Kishida said Japan had achieved its goal of contributing $20 billion to Africa within the private sector, a goal it had set at TICAD7 in 2019. Kishida also announced new commitments. He said Japan “will provide co-financing of up to $5 billion, together with the African Development Bank, in order to improve the lives of African people.”

Senegal’s President Macky Sall said Japanese corporations have the “technological and financial capacity needed to set up partnerships in Africa in sectors such as infrastructure, transportation and housing.”

Deputy Secretary General of the United Nations Amina J. Mohammed commended the foresight of Japan’s leadership in establishing TICAD in 1993. She warned about the scale of the challenges currently facing Africa, adding “Thanks to platforms such as TICAD, we already have the partnerships in place to respond to these challenges in solidarity.”

The African Union Commission’s Chairperson Moussa Faki Mahamat lauded Japan for its efforts to build African capacity through education and training. He praised a Japanese initiative that has trained over 1000 young Africans in nutrition.

Japan had achieved its goal of contributing $20 billion to Africa within the private sector, a goal it had set at TICAD7 in 2019

“This is the time to strongly support the African Adaptation Acceleration Program to mobilize $25 billion for climate adaptation for Africa, especially as we look forward to Cop-27 in Egypt,” Adesina said.

He said the Bank’s African Emergency Food Production Facility, launched in May 2022, was providing $1.13 billion for 24 countries in financing an expected $1.5 billion for emergency food production. The African Development Bank fast-tracked approval of the facility earlier in 2022 to avert a potential food and fertilizer crisis arising from the war in Ukraine.

Adesina thanked Japan for its contribution to the facility. “I am delighted that the Japan International Cooperation Agency (JICA) has provided additional co-financing of $518 million to support the facility.”

During a forum for the business community, Adesina named two spheres where he hoped to see increased Japanese engagement with Africa, namely bilateral trade and investment. He said that Africa accounted for just 0.003% of Japan’s $2 trillion in global foreign direct investment.

Adesina stressed that Japanese firms which were bold in their investments in Africa were those that were prospering. He gave the example of Toyota Tsusho’s investment in automobile factories in South Africa, which had generated $8.5 billion in revenues in March of 2022. Others, he said, included Komatsu and Mitsubishi Heavy Industries.

Citing Africa’s youth, entrepreneurism and innovativeness, Adesina said: “Africa is home to a vibrant fintech ecosystem that is leading the continent’s digital revolution with the highest potential to lead the world. The continent is home to 576 fintech start-ups and they are run by young people.”

Adesina named other vital investment sectors including the production of lithium batteries that power electric vehicles, agribusiness and renewable energy, including from hydropower, wind and geothermal sources.

TICAD8 also included the signing ceremony for 91 memoranda of understanding that Japan’s government and businesses have agreed on with African corporations or governments.

Adesina had a bilateral meeting with the President of the Japanese International Cooperation Agency (JICA) Tanaka Akihito and the Governor of Japan Bank for International Cooperation Nobumitsu Hayashi. He also attended a bilateral meeting with the leaders of the Keidanren, a Japanese economic organization representing businesses and industrial and regional associations. The meetings centered on the need for closer cooperation on investment, including co-financing for key projects, trade and opportunities for Japan’s private sector. Discussions also covered the upcoming 16th replenishment of the African Development Fund, the African Development Bank Group’s concessional lending window.

Manama, Aug. 28 (BNA): As part of his tour to the Kingdom of Bahrain, Albert Shingiro, Minister of Foreign Affairs and Development Cooperation of the Republic of Burundi, paid a visit to the Bahrain Institute for Pearls and Gemstones (DANAT).

The minister was accompanied by Jacques Nahayo Yaacoub, Riyadh-resident Burundian Ambassador to the Kingdom of Bahrain, and several officials.

During their visit, the delegation from the Republic of Burundi was given a tour of the institute's headquarters, including the DANAT laboratory, which is home to the most cutting-edge technology and is being developed by local and international experts to be the best facility of its kind in the world.

They were briefed on the laboratory's efforts in providing pearl and gemstone examination services and issuing globally approved certificates.

Mrs Noora Jamsheer, CEO of DANAT, welcomed Mr Shingiro and the accompanying delegation from the Republic of Burundi, expressing hope that this visit will contribute to strengthening friendly relations between the Kingdom of Bahrain and the Republic of Burundi, as well as enhancing bilateral cooperation in the field of gemstones between the two friendly countries, in addition to exchanging experiences and building capacity in this vital field.

“DANAT seeks to introduce at the regional and international level the heritage of Bahraini pearls that extends for more than five thousand years, both through these visits and through similar events held and participated inside and outside Bahrain, within the framework of the national plan to revive the pearl sector in the Kingdom of Bahrain,” according to Mrs Jamsheer.

He emphasised the importance of DANAT in boosting confidence in the pearl trade in Bahrain and around the world, as well as its success in cementing the Kingdom of Bahrain's position as a global leader in the pearl and gemstone industries, reiterating that his country welcomes future opportunities to expand cooperation with the Kingdom of Bahrain in this area. - Bahrain News Agency