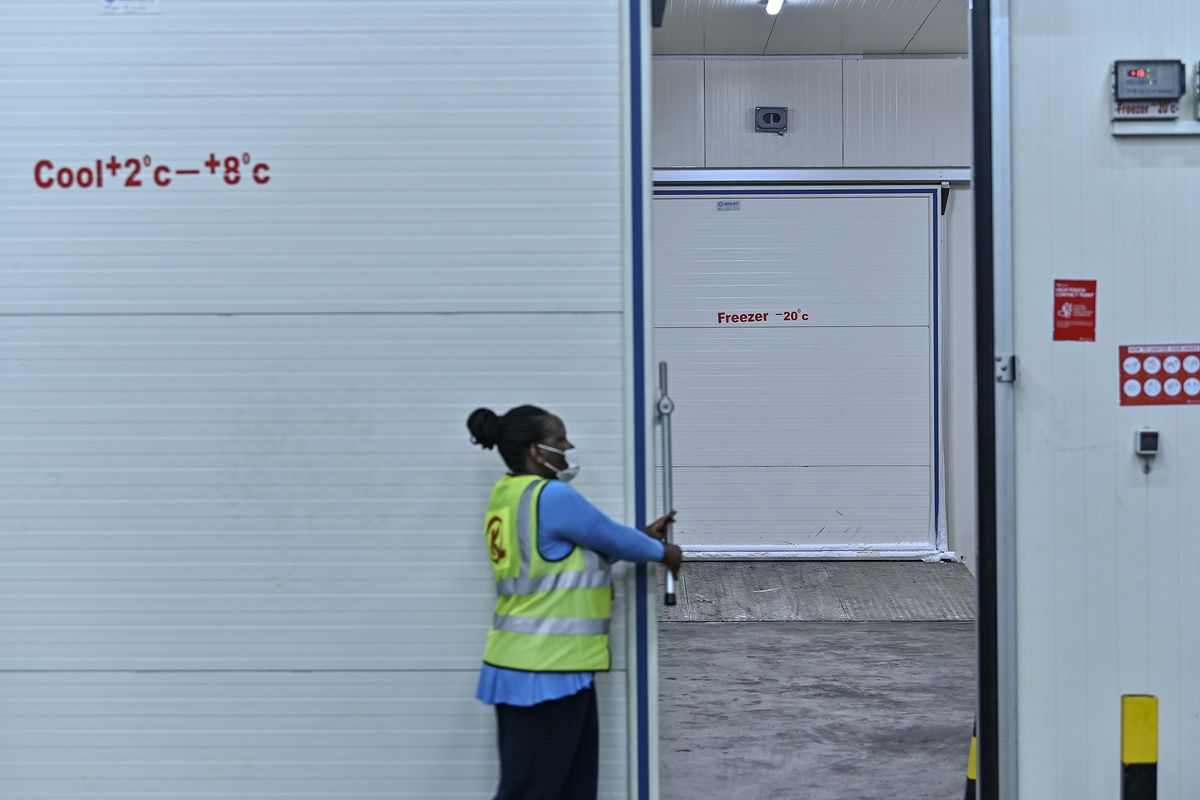 Kenya Airways Cargo's coldroom to be used for the storage of vaccines at the Jomo Kenyatta International Airport (JKIA) in Nairobi, on Feb. 11. Photo Tony Karumba/AFP/Getty Images

Kenya expects to get its first Covid-19 vaccines by the end of this month and inoculate 16 million of its roughly 53 million people by June next year, according to Health Secretary Mutahi Kagwe.

The country will procure vaccines made by AstraZeneca Plc, Pfizer Inc. and Johnson & Johnson, and any others in the Covax facility, an initiative for developing countries to access doses, Kagwe said Friday in a statement. East Africa’s biggest economy targets 24 million doses from Covax and will buy another 11 million shots from other mechanisms.

Kenya will decide by the of next week whether to approve vaccines from China’s Sinovac Biotech Ltd. and AstraZeneca, and a Russian version known as Sputnik V, Fred Siyoi, head of the country’s drug regulatory authority, said by phone. - David Herbling, Bloomberg 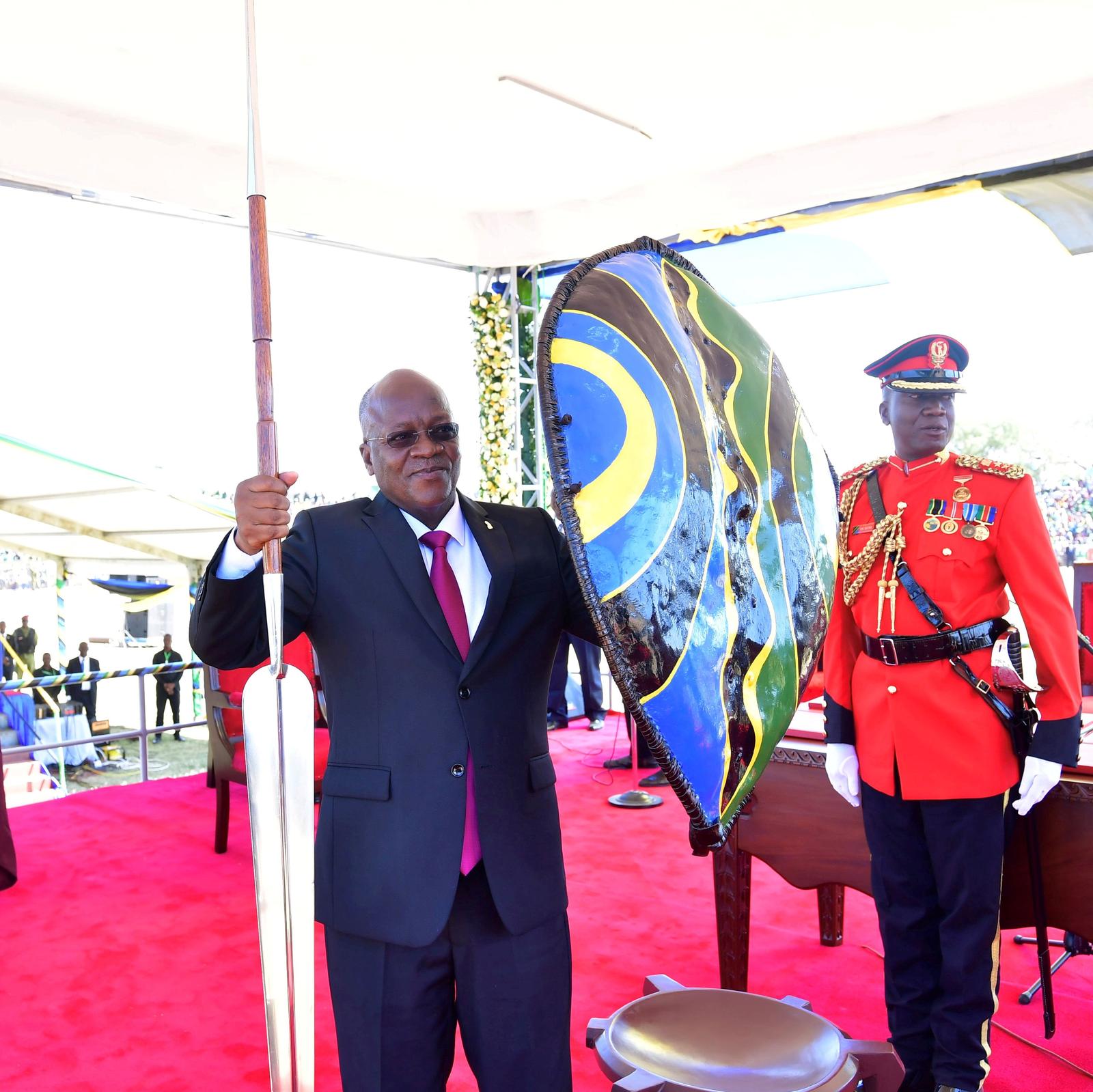 Tanzania's re-elected President John Pombe Magufuli holds a spear and shield from the elders after he was sworn-in for the second term at the Jamhuri stadium in Dodoma, Tanzania November 5, 2020. Tanzania State House Press/Handout via REUTERS

NAIROBI (Reuters) - The United States said on Wednesday that Tanzania, whose president has advised citizens to shun coronavirus vaccines, is experiencing a surge in COVID-19 cases and its healthcare facilities could be quickly overwhelmed.

In a statement, the U.S. embassy in Dar es Salaam said it was “aware of a significant increase in the number of COVID-19 cases since January”.

“The practice of COVID-19 mitigation and prevention measures remains limited ... healthcare facilities in Tanzania can become quickly overwhelmed in a healthcare crisis.”

Tanzanian leader John Magufuli has said citizens should avoid vaccines and the country does not need a lockdown because God will protect his people.

Homespun precautions such as steam inhalation, he said, were better than dangerous foreign vaccines.

The U.S. embassy did not give figures for the surge in infections but said “limited hospital capacity throughout Tanzania could result in life-threatening delays for emergency medical care”.

Magufuli has also rubbished imported COVID-19 testing kits, saying they had returned positive results on a goat and a pawpaw fruit. He has promoted traditional remedies, without offering data or scientific evidence. - Reuters Writing by Elias Biryabarema; Editing by Giles Elgood 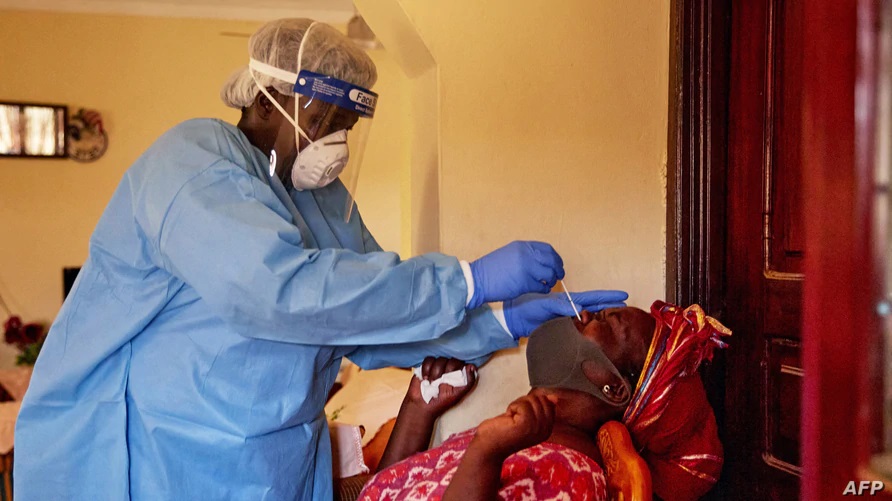 A member of South Sudanese Ministry of Health Rapid Response Team takes a nasal sample from a woman at her home after she came into into contact with a confirmed COVID-19 case, in Juba, South Sudan, April 14, 2020. Photo AFP

JUBA - More than 800,000 doses of the AstraZeneca COVID-19 vaccine should be delivered to South Sudan by the end of the month according to a South Sudanese health ministry official.

Doctor John Rumunu, director-general for preventive health services at the national health ministry said the vaccine will first be administered to the country’s most vulnerable populations.

Rumunu told reporters in Juba Sunday that South Sudan met all of the requirements necessary to acquire the vaccine.

“I’m happy to let you know that the 864,000 doses are from AstraZeneca, and AstraZeneca is using the same chain like we are using for the routine vaccination, meaning you need fridges that can keep vaccines in conditions of two to eight degrees centigrade. We have that all over the country,” he said.

Concerns have been raised over the safety and efficacy of preserving COVID-19 vaccines in hot climate countries like South Sudan, concerns triggered primarily by misinformation circulating on social media platforms such as WhatsApp and Facebook.

“There should be no worry about safety and efficacy because we have an elaborate mechanism in place as WHO and the country also has its own. Many countries also will be looking at it on their own, independently,” Guracha said.

“We need to be very careful in handling and sharing that information with, let’s say innocent people, who may not necessarily have their own analytical capacity. I mean, if someone really wanted to actually do something against Africa or black race, why should it be through vaccines?” Thuou said in Juba.

Africans are consuming many other common drugs from the Western world like malaria medications such as Artimisin, according to Thuou.

He urged South Sudanese to practice social distancing and follow other preventative measures to prevent transmission of the virus in markets and other places where people congregate.

“Part of the reason why partial lockdown is mandatory is the behavior of our people. If you go to Konyokonyo [marketplace]… before partial lockdown was declared, you will not have a sense that there’s COVID-19 in this country, people are just mingling [in the] crowd and nobody cares, hardly people wear masks,” said Thuou.

Health officials are reporting a rapid jump in the number of COVID-19 cases in parts of South Sudan, particularly Central Equatoria state, which in recent days reported more than 300 new cases.