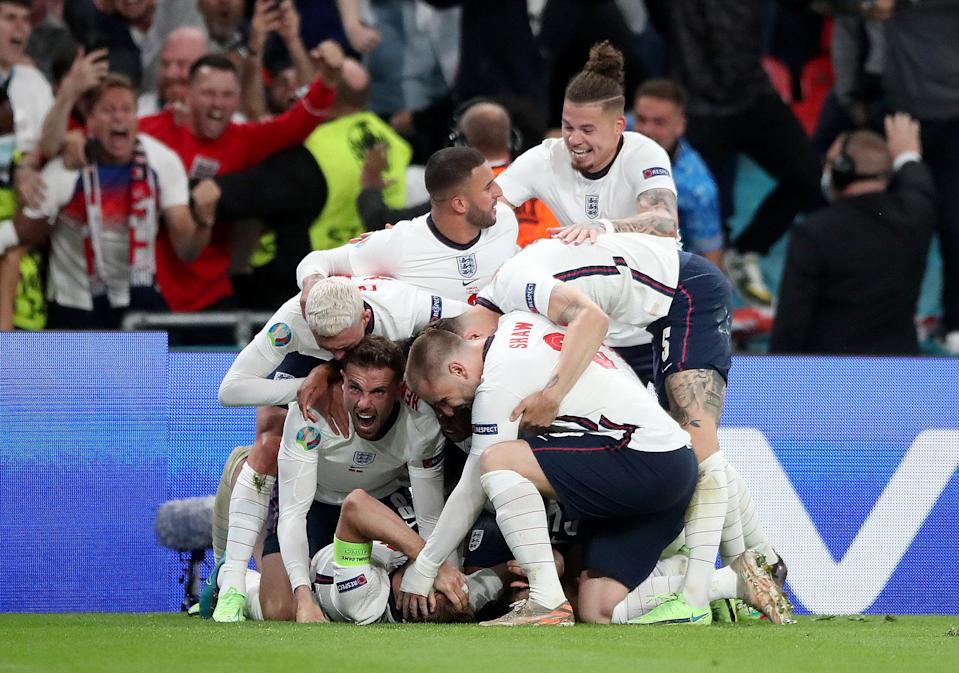 Gareth Southgate was delighted for his players and the entire nation after England held their nerve to seal a historic win against Denmark and reach their first European Championship final.

Three years on from the heartbreaking World Cup semi-final defeat to Croatia, the Three Lions roared to a 2-1 extra-time victory in front of 64,950 fans at a rocking Wembley.

England had to come from behind to beat a dangerous, well-drilled Denmark side as Mikkel Damsgaard’s impressive free-kick saw Jordan Pickford beaten for the first time at Euro 2020.

But Southgate’s side rallied impressively and Simon Kjaer’s own goal saw them level before Harry Kane fired the hosts to victory after Kasper Schmeichel saved his initial penalty, sparking pandemonium across the land.

Now the attention turns to Sunday and England’s date with destiny against Italy in the Euro 2020 final.

“They’ve responded to what was always going to be a really challenging night,” Southgate said of his players.

“We were so smooth through the quarter-final and relatively unscathed through the second round. We knew that at some point we were going to concede and we would have to respond.

“Denmark have had an incredible tournament. I have got to give them huge credit. I thought they made it really difficult for us tonight. They pressed us so well, scored a fabulous goal – the boy is a super player.

“But I think on the balance of play when you look at the number of saves we forced the goalkeeper to make and long periods of the game where I felt we were the biggest threat, I think we deserved it.

England’s victory came 25 years on from the European Championship semi-final defeat to Germany, when Southgate missed the crucial spot-kick in the shootout.

But the Three Lions boss has spoken throughout the tournament about making history rather than fixating on the past.

“I felt calm in the lead up to the game because I felt the players, with what they’ve been through, were ready,” Southgate said.

“You’re never 100 per cent sure how they react in difficult moments but we have talked about it and they stayed clam.

“I didn’t think we kept the ball well enough through Denmark’s pressure from the front three and we’re going to have to do that better on Sunday because Italy are very good at it so we need to find better solutions with that.

“But we found a way to win and we found the way to find the spaces further forward. Once we got into their half we were a threat all night.

“All of our wide players – Raheem (Sterling), Bukayo (Saka), Jack (Grealish), Phil (Foden) when he came on, Mason (Mount) – got in-between the lines or were in those one-against-one situations wide. They were a real handful.

“We managed to create good openings. I thought the goalkeeper for them had a fantastic game. He’s a top goalkeeper.

“But we found a way to win. The second half of extra-time, I think it took us a while to realise actually to keep the ball to finish the game. It took us five minutes for us to work that out and then we got clued into it.

“We invited more pressure in that initial period than we needed to, but huge credit.

“These players have been immense from the first day we met back at Middlesbrough.

“The whole group. The boys that didn’t make the final cut, the group that have been here together, all of the staff. They deserve what’s been a really special night.” By Simon Peach, The Independent/Yahoo News 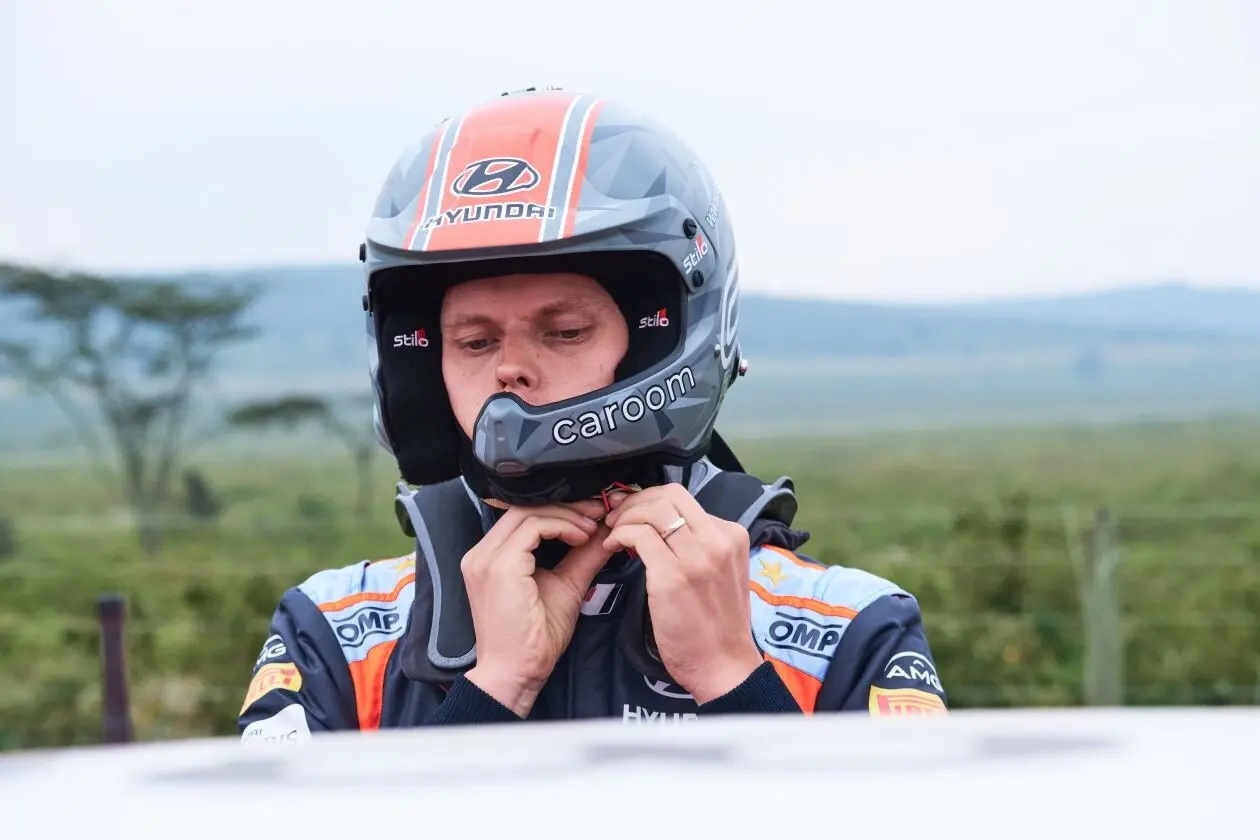 Ott Tänak's Hyundai WRC team has been reflecting on another disappointing weekend, after the WRC Safari Rally Kenya – though Tänak himself provided the consolation, making his second podium appearance of the season, and the first since February.

Tänak said post-race that: "On the one hand, it's good to be back on the podium and take the maximum points from the points test, but it's been another difficult weekend for the team."

The Estonian, 33, from Saaremaa, who was WRC champion for Toyota in 2019, said that the Kenya rally brought with it specific challenges which meant he could not go all out at all times, lest it backfired.

"I put on 50-60 percent of myself so as not to make mistakes and so as to drive as smoothly as possible. Friday was demanding – as the safari rally should be – and it was the same again this morning," he continued, via a Hyundai press release.

Those demands included the technical – at one point Tänak had to spend a minute-and-a-half manually cleaning the windshield after the wiper on his side of the car packed up – and the environmental, as local wildlife including Zebra, baboons, gazelles, giraffes and others came near or actually on to the track, causing many of the competing drivers, including Tänak, to have to hit the brakes.

More than that, Hyundai had been in the lead going into Sunday, via Belgian Thierry Neuville, but rear suspension failure ended his race prematurely, though it did promote Tänak into a podium position. Spanish driver Dani Sordo also had problems in his Hyundai i20 on the opening day of the event.

"It's a pity that things didn't work out for Thierry this weekend. We're heading back to Estonia now, for my home rally, which should be nice," Tänak added.

The third-place was his second podium finish this season, after winning the Arctic Rally in Finnish Lapland back in late February.

Tänak, who lies fourth in the driver's table, and co-driver Martin Järveoja, failed to make the top three after that, in Croatia, Portugal and Sardinia.

The race was won by veteran, six-time world champion and current table leader Sebastien Ogier (France, Toyota), with his teammate Takamoto Katsuta of Japan putting in a career-best second.

Hyundai boss Adriano Adamo was in characteristically uncompromising mode after the weekend.

He said: "We can't be satisfied. This is the third rally in a row where we have had problems. So we can't put it down to bad luck. No excuses, this just shouldn't happen."

Ott Tänak was at least impressed with the race itself, making a return to the WRC calendar after a near 20-year absence.

Tänak said: "This race has impressed and has brought something different, offering unique pleasure - such as Friday's 'fesh-fesh', which is challenging, but is like an adventure."

Fesh-fesh is a particular type of fine sand or dust which at a glance looks like it provides a hard surface, but upon driving on it reveals qualities more similar to soft mud. - Andrew Whyte, ERR News 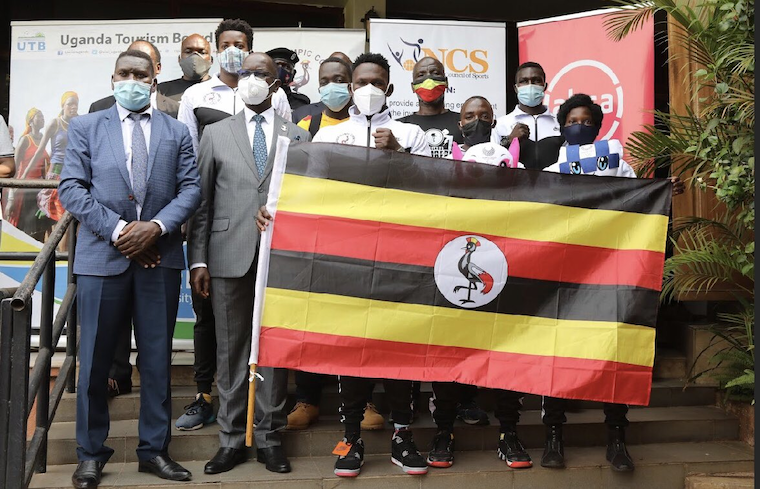 The Ugandan Olympic team while being flagged off in Kampala. Photo The Observer

One member of the first batch of Uganda's athletes' team has tested positive for COVID-19 on arrival in Japan for a one-month camp training.

The team of nine people including three boxers, one weight lifter, and one swimmer plus coaches and officials was flagged off on Thursday by Sports minister designate Hamson Obua for their one-month spell in Japan ahead of the Olympic games in July.

However, after arrival in Japan on Saturday, one of the members tested positive for coronavirus disease and is currently being kept in Japan’s designated isolation facility while the other members of the Ugandan team traveled to Osaka, western Japan, where they will train ahead of the games.

Hidemasa Nakamura, the Tokyo 2020 Games delivery officer, while talking to reporters also made it clear that the person had been isolated.

“I heard the person has been isolated based on regulations,” said Nakamura.

While flagging off the athletes, Beatrice Ayikoru, the chief of mission for Tokyo made it clear that all athletes had been vaccinated and tested twice before leaving. She also said they have been in isolation for two weeks.

The team wanted to start gearing up for the games at their training camp, however, this means that their preparations suffered a setback. This comes at a time when the NCS Dr. Bernard Patrick Ogwel had told sports federations to appreciate the realities of the times and adhere to the standard operating procedures, that the national team players should be secluded from the public to prevent them from getting the virus.

This is the fourth similar COVID-19 incident to happen for a Ugandan contingent, and three Uganda national teams have been withdrawn from international competitions accordingly after members of these members tested positive for COVID-19 on the eve of the kick-off of the competitions.

These include the National Basketball team, Women Cricket and lately the Uganda Rugby Sevens team that was withdrawn from Olympic qualifiers in France.

The second batch of Uganda Olympians is scheduled to travel on the 29th and 30th of this month. According to Ayikoru the team will comprise of the middle distance runners from the athletics discipline. - URN/The Observer