Tanzania took a giant leap towards their pursuit for a final round spot in the African qualifiers for the FIFA U20 Women's World Cup, Costa Rica 2022™, securing a 1-0 victory over Ethiopia in Zanzibar on Sunday.

The fourth round fixture had rekindled the East African rivalry between Tanzania and Ethiopia, after both teams previously earned third round wins over Burundi and Eritrea respectively.

The home side and reigning COSAFA U20 Championship winner made the brightest start with several chances but couldn't convert them against the Ethiopians as the first half ended in a barren draw at the Amaan Stadium.

After the break, the visiting CECAFA U20 Women's Cup champions also returned to the pitch with intent to snatch an away goal, but it was the Tanzanite that found a breakthrough in the 64th minute thanks to Christer Bahera's effort.

With a goal down, the desperate visitors staged late attempts in closing stages to grab an equaliser but the hosts held on solidly heading into the full time to seal a narrow win.

The slim win handed Tanzania a first leg lead going into the second leg at the Abebe Bikila Stadium in Addis Ababa, where their neighbours Ethiopia will be hoping to overturn the one-goal deficit in a fortnight.

Winner of the grudge East African fixture over two legs will progress to a four-team final phase, where they are scheduled to face either Ghana or Uganda in March 2022. - Confédération Africaine de Football 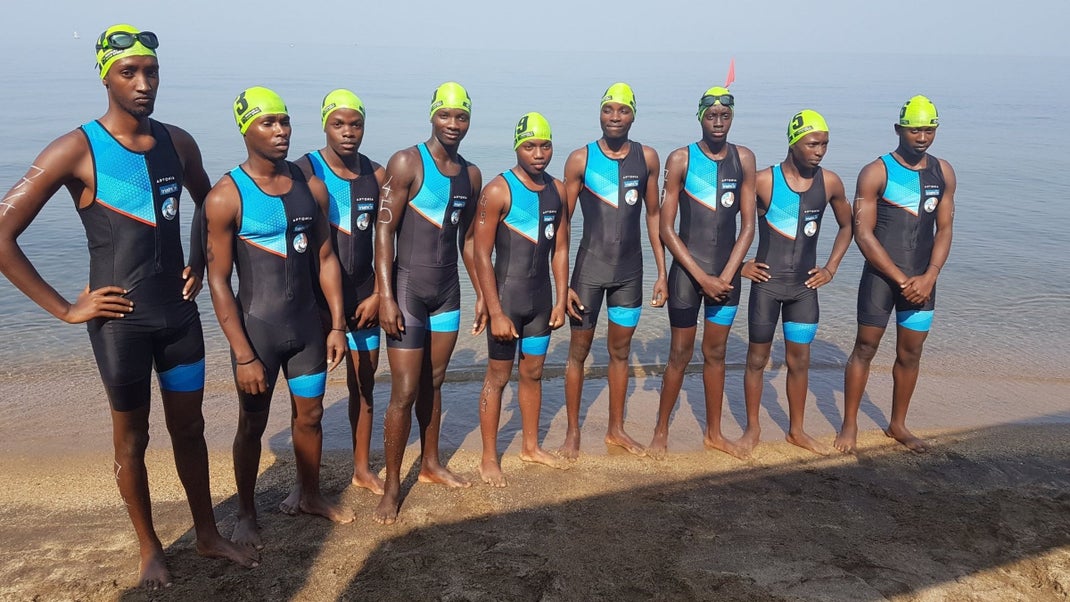 Today, Ironman announced a new 70.3 location for this August: Rubavu, Rwanda. Though course maps are still being finalized, the race will take place primarily in and around the town of Gisenyi, a resort area along the shores of Lake Kivu and near the Volcanoes National Park that borders the Democratic Republic of Congo.

While there have been other Ironman races in Africa—in South Africa, Morocco, and Egypt—and there have been previous World Triathlon races (formerly ITU) on the continent—in Zimbabwe, for instance, and an African Triathlon Cup in the Rubavu region, this is the first Ironman brand race hosted in the African interior and the first in Rwanda.

“We’re very, very excited,” said Alexis Mbaraga, the head of the Rwanda Triathlon Federation. “The awareness is increasing more and more. Every day people want to join,” he said—now that they’re seeing triathlon in the media and hearing about the sport.

The question for many international triathletes has been how much will this new race grow local triathlon participation and how much will it attract athletes looking for a vacation in a spot known for its rainforests, volcanoes, and gorillas?

The answer is probably a little of both.

According to Mbaraga, there are currently about six tri clubs, 8-10 local races, and around 300 triathletes in the country—though that is growing and support has increased in recent years. After coming over to triathlon from volleyball over a decade ago, Mbaraga founded the Rwanda Triathlon Federation in 2012 and it’s now recognized by World Triathlon.

This 70.3 race, though, he said, has brought a lot more support and attention. The Rwanda Minister of Sports has committed to supporting local athletes and getting a dozen to the start line. They’ll also have a relay option, which is a nice intro for new athletes, he said.

While cycling has grown in the country in recent years after the attention and movie about the popular Rwanda National Cycling team, Mbaraga said the biggest challenges for triathletes are pools and equipment—just getting bikes shipped in to people can be tough. And there are only about five certified coaches and ten race officials, so growing that capacity to support more races at a high level is the next major undertaking.

But, Mbaraga said, the federation has gotten gear and support from all over, from the Japanese Embassy, the Rwanda National Olympic Committee, and the Association of Francophone Triathlon Countries (which met at the end of this past year in Rubavu). And now the publicity and excitement that’s come with the 70.3 announcement is spurring more local attention to swim-bike-run.

“We are just starting,” he said. “We need to develop triathlon quickly because it’s a good sport.”

New Ironman races in areas that did not previously have a race often bring in a large contingent of new local athletes. For instance, while the first-ever 70.3 in Morocco had a plurality of European athletes because of the proximity of the race to Europe, it also had over 20% of registrants from Morocco, many of whom were first-time 70.3 athletes, and a Moroccan pro man who finished 8th. A new large age-group event, particularly one with media attention, has been shown in other cases to grow local triathlon clubs and increase participation in the area.

“We know from our work in South Africa, Morocco, and Egypt that there is a huge appetite for endurance sports on the African continent,” said Thomas Veje Olsen, managing director of Europe, Middle East, and Africa for The Ironman Group, in a press release.

Rwanda has also been positioning itself as an international sporting hub over the last few years, with the Rubavu region hosting a FIVB Beach Volleyball World Tour last summer and the country winning the bid for the 2025 World Road Cycling Championships.

The announcement of the Ironman 70.3 race was preceded this past Tuesday by an official meeting between President Paul Kagame and high-level insurance executives, who were helping to get the event off the ground. This first Ironman race contract will run for three years.

“Rwandans are passionate about sports and the country is quickly becoming one of Africa’s leading destinations for global sporting events,” said Clare Akamanzi, Rwanda Development Board’s CEO, in a press release.

The race will take place on Aug. 14 and will offer spots to the 2023 70.3 World Championships in Lahti, Finland. Registration opens Feb. 1. - Triathlete

South Africa’s Dewald Brevis cracked 108 and took the final wicket as South Africa downed Uganda by 121 runs in Trinidad, an emphatic response to their opening Group B defeat at the hands of India.

Having elected to make first use of the Queen’s Park Oval pitch, the young Proteas stuttered and lost openers Ethan-John Cunningham (1) and Valintine Kitime (12) in the powerplay.

That brought Brevis to the crease, with the starlet nicknamed ‘Baby AB’ hoping to build on his fine 65 in a tournament-opening loss to India. He cracked a pair of back-foot boundaries from the second and third balls he faced and pulled medium pacer Yunusu Sowobi dismissively for six in the 13th over.

Brevis’s fast start allowed skipper George Van Heerden to play on the undercard and the pair combined for 74 before the latter pulled a full toss to Fahad Mutagana at 113 for three. Brevis pressed on, scoring heavily behind square on the off side and building a half-century partnership with Kaden Solomon that ended when the keeper-batter was stumped at 166 for four.

Wickets fell around him regularly but with a quick single in the 41st over, Brevis brought up a superb century from 108 balls and lifted his side above 200. The innings petered out somewhat and South Africa lost their last five wickets for 24 runs thanks to seamers Juma Miyagi (3-33) and Pascal Murungi (3-58).

Uganda also found the powerplay overs tough going and left-armer Aphiwe Mnyanda turned the screw early on, castling Ronald Omara in the second over. Mutagana and Isaac Ategeka steadied the ship and got to 33 for one before the former nicked off to Solomon to give Mnyanda another.

That would prove the biggest partnership of the innings as Uganda subsided to 110 all out, losing their last five wickets for 24 runs.

Brevis was the undisputed star of the show with bat and ball, also chipping in with 2-18 and bowling Juma Miyai to take the wicket that sealed victory.

South Africa finish their Group B campaign against Ireland on Friday while Uganda face group leaders India on Saturday.