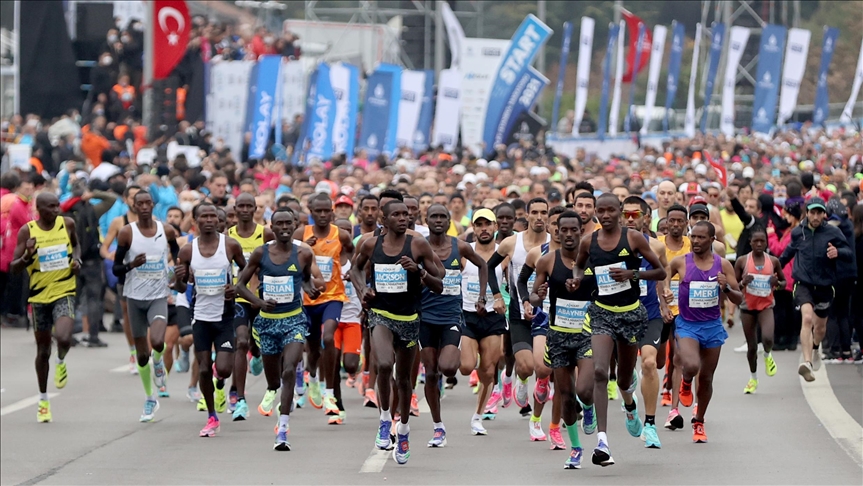 Kiplangat finished the 42-kilometer (26 miles) run in two hours, 10 minutes, and 18 seconds in the men's category.

Kenya's Robert Kipkemboi trailed five seconds behind Kiplangat to be the runner-up and Solomon Mutai from Uganda came third as he finished the men's race seven seconds behind the leader.

In the women's category, Sheila Jerotich from Kenya came first in two hours, 24 minutes, and 15 seconds.

A total of 20,000 people participated in the public run categories, while 54 elite athletes ran in the competition.

The marathon, a long-distance running race and the only intercontinental marathon in the world, was held in three categories: the 42,195 meters (138,435 feet) run, as well as the 15-kilometer (9.3 miles) and eight-kilometer public run.

The idea of running from Asia to Europe, first proposed by the daily Tercuman in 1973, was realized in 1979 upon the initiative of a group of German tourists.

The Istanbul Marathon, which is included in the "Gold Label Road Races" of the World Athletics Association (IAAF), is among the most popular marathons in the world.

The race kicked off at 9 a.m. local time (0600GMT) in the Altunizade neighborhood of Uskudar district on the Asian side of the Turkish metropolis, and ended at Sultanahmet Square, on the European side. - Emre Asikci, Anadolu Agency 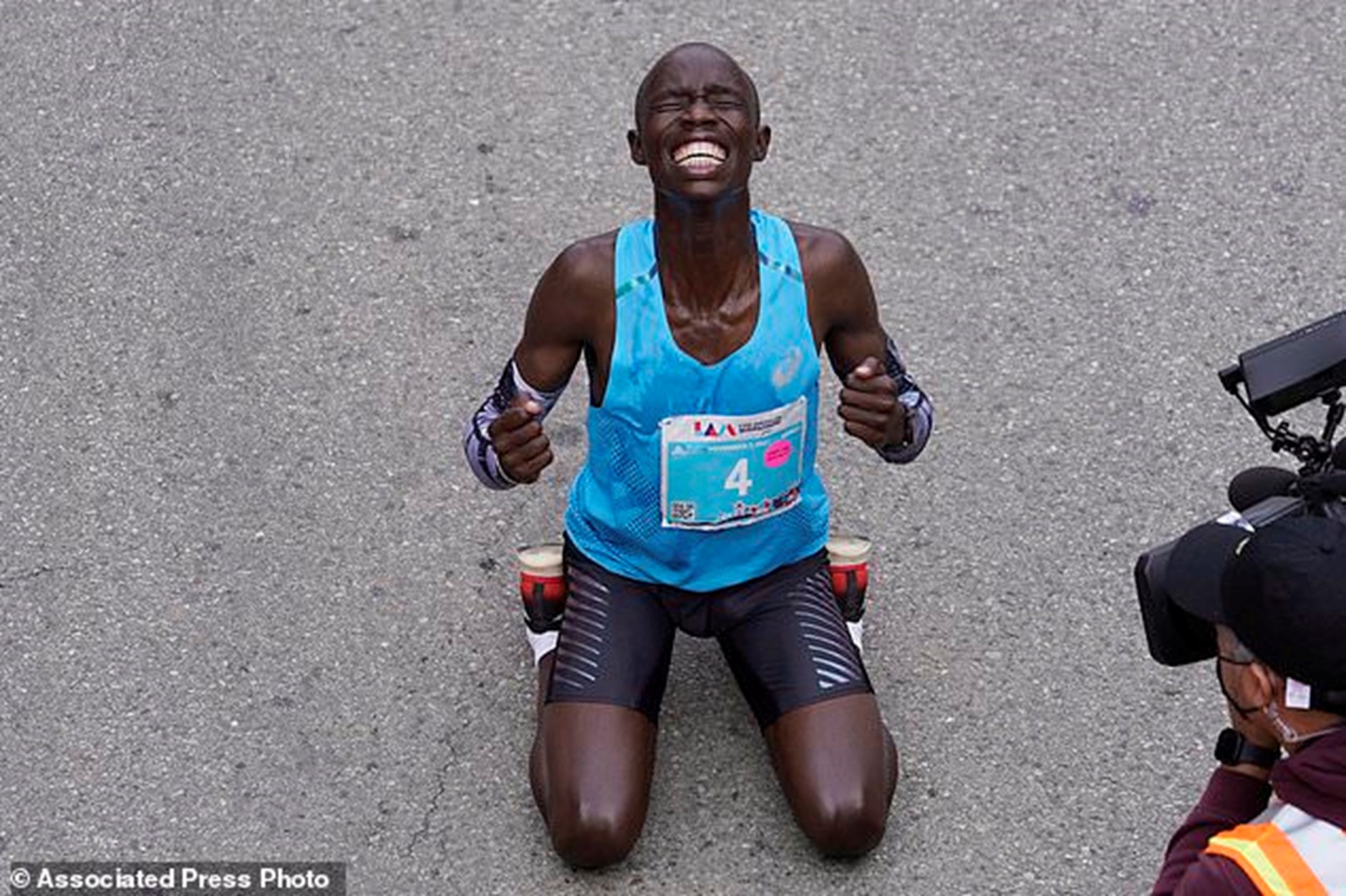 LOS ANGELES (AP) - John Korir of Kenya made a break with 7 miles remaining to win the 36th Los Angeles Marathon on Sunday.

Natasha Cockram of Wales won the women's race with a similar strategy.

"Now our family is so happy today," John Korir said. "This is three times our family winning this race. We are happy now."

"I wasn´t sure how my body was going to be feeling after London," Cockram said. "About halfway, I felt sure and comfortable. I kind of wish I´d gone earlier."

Kenya´s Antonina Kwamba was second in 2:37:36, edging Russia´s Nina Zarina by a second.

The race traditionally takes place in March. It returns to that spot next year. 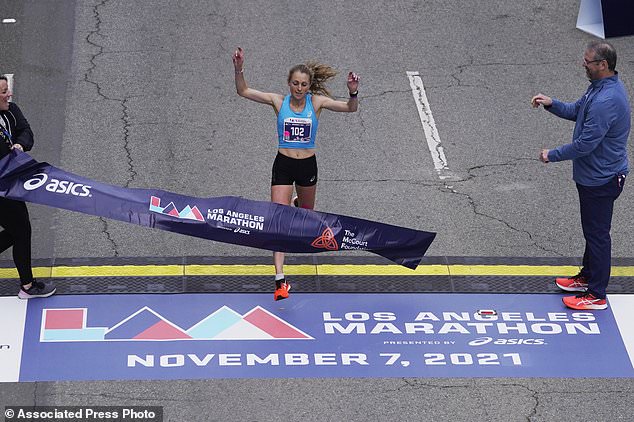 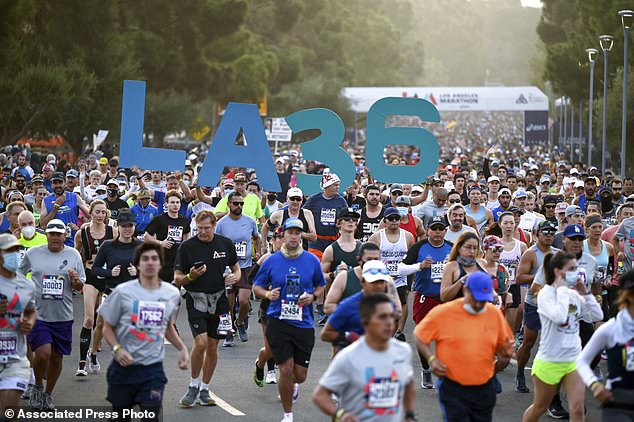 Runners head out from Dodger Stadium at the start of the Los Angeles Marathon, Sunday, Nov. 7, 2021. (David Crane/The Orange County Register via AP) 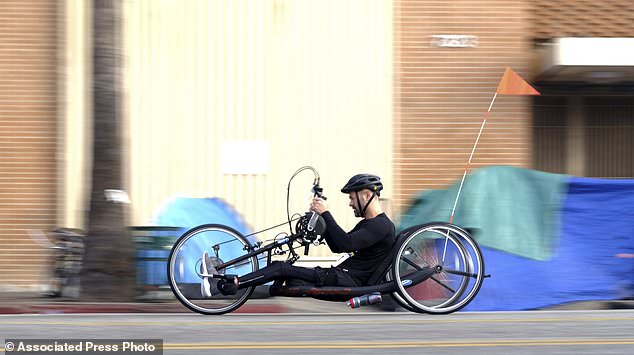 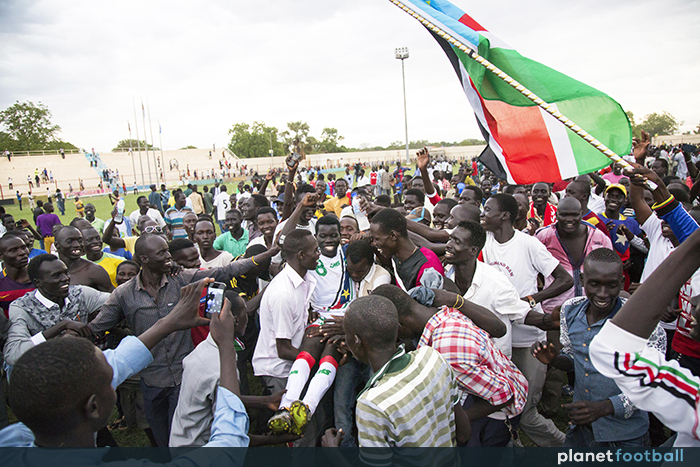 As a youngster, Friday Zico was forced to flee war-torn Sudan. As a young adult, he nearly joined Manchester United and is now one of his home nation’s brightest footballers.

Tucked away in the south east corner of South Sudan is a small town called Magwi, based in the Eastern Equatoria state, one of 10 that make up the world’s most recent country.

Despite its tiny population, the town can claim to being the birthplace of one of South Sudan’s most talented young footballers, and so key to a sport that’s doing its best to bring some peace and harmony to a war-ravaged nation.

His name is Friday Zico. He fled Magwi in 2004 for Uganda, which lies just a few miles south of the little town where he grew up, and has spent the last 13 years living in Australia, settling in Perth and playing for local club Cockburn City after spells at several other teams in the area.

His extraordinary journey very nearly took him to the Premier League.

The beginnings of the national team

South Sudan has only been recognised as a nation since 2011, gaining independence six years after one of the longest civil wars in history finally ended back in 2005.

Sadly, a new civil war broke out in South Sudan at the end of 2013 and there is no calm in sight for the thousands of people affected every day, including those in Magwi.

Shortly after South Sudan gained their independence, Dr. Sally Samuel Lolako was appointed to oversee the creation of a national football team, and exactly 12 months later they were admitted as a full FIFA member at the 2012 FIFA congress in Budapest.

In their first full international in July that year, they gained a credible 2-2 draw against neighbours Uganda, landing them a spot at 199 in the official FIFA rankings.

In September 2015, the country won its first competitive match, a 1-0 triumph against Equatorial Guinea in a qualifying match for the 2017 Africa Cup of Nations

Zico, a defender that can also play on the left wing, was not involved having suffered a serious knee injury. He has made only two appearances for the national side, in fact, but having overcome so much already, it is a figure he will undoubtedly add to.

“After we got to Uganda, we were refugees and the Australian government took us in whilst John Howard was the prime minister,” Zico says.

“They brought us to Perth; we didn’t really ask too many questions about where we were going as long as we knew it was safe to live in.”

Zico was part of the Acholi tribe growing up, one of around 162 tribes that make up South Sudan. The Acholi originate from Eastern Equatoria but have now spread across Northern Uganda. Some have even found their way as far as Kenya.

The Acholi are peaceful people that Zico says don’t believe in “tribalism or hateful war”.

“Our tribe has been on the receiving end of the civil war; rebels are abducting children and turning them into soldiers,” he says.

“I was one of those that got taken by Joseph Kony, the leader of the Lord Resistance Army, he’s murdered millions of people and the number keeps going up.

“Acholi people are hard-working people who live off working in their farm and selling crops to provide for their families – we live a simple life.”

With the country starting to build a solid enough squad to compete with the smaller African nations, Zico was finally called upon in July 2015 to make his debut for the country he fled 10 years previously.

“It wasn’t an easy decision to go back to South Sudan knowing what is going on there,” he says.

“The country wasn’t stable or safe so it was a risk. I spoke to so many people about returning because we were meant to go back in 2012 before the civil war broke out. Thousands were left dead and when that happened we were too afraid to return.”

Zico eventually returned for the first time in 2014 when he was called up for a training camp as South Sudan prepared for the CECAFA Cup, but the tournament was cancelled due to the Ebola outbreak in Africa and the then-teenager soon returned to his new home in Western Australia.

Despite the horrors that await him every time he returns, Zico recognises the importance of where he was born and the huge part that football plays in the lives of people who are desperate for a little bit of normality among all the chaos.

“I’ve lost a lot of important people in my life to the war there and I still went back to the country to represent my place of birth,” he says, proudly.

“There aren’t many players in the national team as so many of them have been affected by the war. Football is the only way out for us.

“Through all of that they stand and smile when they watch their national team, they get inspiration that drives them to get somewhere.

“It even brings peace between various tribes in South Sudan that normally wouldn’t get together, but people love when their country is winning and playing well, things get forgotten.”

Hope for the future

The national team squad is currently made up of players who mainly play their football in either Sudan or South Sudan, Zico is one of a few that play in Australia, while several have dual nationality and have previously represented Sudan before making the leap to the south.

Richard Justin Lado – a 36-year-old defender – scored South Sudan’s first official goal and has spent most of his career playing in Sudan for Al-Hilal.

Striker James Moga represented Sudan as far back as the qualifiers for the 2002 World Cup – while Zico was an eight-year-old in the midst of the civil war.

“The national team has only been around a few years, we knew it was going to take time,” says Zico.

“The squad is being built around a lot of us younger players, but the people are ready to be patient with us. With enough support from FIFA and our government the team will do something great, but first we need the support from everyone in the country.

“When we got our first win it was amazing, but I wasn’t surprised because I knew our boys were good enough to beat other nations on our day.

“When we won our first game in 2015 [against Equatorial Gunea], you could see the joy on people’s faces. Everyone hung out together, celebrated together, drank together. It was amazing to see the passion among our people.”

Zico is certainly one of the most talented players that represents the nation right now, but injury in the build-up to their first ever win in September robbed him of the chance to play and ruled him out for most of 2016.

His talent has not gone unnoticed, though, and almost led to a move to a European giant three years previously while he was  pushing on with his career in Australia.

“I had the opportunity to try my luck at Manchester United,” he says.

“I think David Moyes was the coach, it was around the end of 2013 and I was playing in a match in Manchester against Fleetwood Town for Stockport.

“I was scouted for three months or so by their staff. It was amazing that I was rated so highly, that’s one positive that I will always take with me, but sadly I couldn’t obtain a work permit or else I would have gone over and spent time with the under-21 team in 2013.” - By Rich Laverty, PlanetFootball.com