(Bloomberg) -- Tanzania’s central bank has placed a 10-year limit on the tenure of chief executives officers of banks and banned elected officials from serving on the boards of financial institutions.

CEOs and board members of banks will need to stand down for three years after completing a decade in office before they can be reappointed, the Bank of Tanzania said. The aim of the new rules, published last week, is to “promote and maintain public confidence in banks and financial institutions” by improving corporate governance.

Banks will also be prohibited from offering commercial loans to employees on terms more favorable than those available to other regular borrowers.

Tanzania has tightened regulatory oversight of banks in recent years in an attempt to safeguard stability of its financial services sector. The central bank is encouraging consolidation of banks and wants to lower bad loans to boost the growth of credit to the private sector. - Fumbuka Ng'Wanakilala, Bloomberg News

Ukur Yatani, cabinet secretary of the national treasury, said that the performance was buoyed by rebounds in most economic activities as compared to slow growth in the previous quarter.

According to Yatani, some of the sectors that supported overall growth in the second quarter included manufacturing, education, transportation and storage, information and communication and other services activities.

He said that the manufacturing sector's growth was driven by expansion of both the food sub-sector and non-food sectors.

The Kenyan official said that there was a slowdown in performance of agriculture, forestry and fishing activities.

He said that the agricultural sector's performance was cushioned from a steeper slump by a notable increase in milk production, horticultural exports and production of sugarcane.

Freight movement through Standard Gauge Railway (SGR) increased to stand at 1,326,000 tons in the second quarter of 2021. And passenger transport through SGR increased to 304,445 passengers in the period under review. - Xinhua 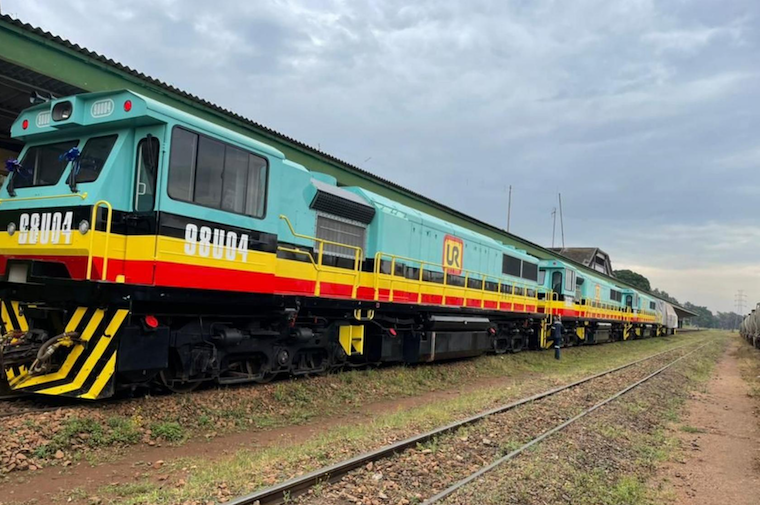 URC's locomotives. Photo via The Observer

MPs have faulted Uganda Railway Corporation (URC) for purchasing old locomotives at a cost that was much higher than that of new ones.

Parliament's committee on commissions statutory authorities and state enterprise (Cosase) was today meeting officials from URC over the procurement of locomotives which were later found to be incompatible with Uganda's rail system.
This follows concern that the eight-year-old locomotives were too long and couldn’t turn at the available triangular sections of the rail among other challenges.

A team of URC officials led by managing director Stanley Sendegeya told the committee that they had initially planned to procure six-year-old locomotives at Shs 36 billion but they ended up procuring four eight-year-old locomotives at Shs 48 billion. The decision, he says, was taken by chief engineer Julius Musimenta in disregard of recommendations by a team of experts within URC.

Peter Katwebaze, the acting chief mechanical engineer said that the reason they went for the old ones was that the new ones would take between two to three years to be procured, and yet the locomotives were needed urgently.

"They had exposure and really they knew that you cant get new locomotive first of all urgently but also the funding was not available but generally also, we have been explaining that these locos even though they are not a bit new, they can live for 40 years, we have that guarantee. Generally, the answer is they came from a systematic survey, the project was approved by parliament here and that is how they are being funded under the capacity building project of Uganda Railways Corporation which is under implementation…Government doesn’t buy used things, it is the standard, for you to buy used things, you must get specific clearance which we have on our file," Katwebaze submitted.

Cosase chairperson Joel Ssenyonyi questioned the transition from the initial Shs 36 billion for slightly newer locomotives to Shs 48 billion for older ones.
"We were initially meant to buy new locomotives but then you decided, no because we want to move very quickly let’s buy old locomotives that are 8 years old - total cost of Shs 48bn for 8-year-old locomotives. Why? Because we want this to happen very quickly but then a very long time after we bought these locomotives they are not working yet because we still need to make modifications on the railway for them to be able to move properly, the triangle and all these different things. Then the excuse of you we were trying to beat time doesn't make sense because maybe if it were, why did you not make modifications to the railway system well knowing that now we’re buying old, used locomotives which will require us to have modifications on the triangles and all these other different things," Ssenyonyi said.

Katwebaze, however, said that the evaluation at that time took into consideration the foreign exchange rates and the viability of procuring new versus old. He added that the figures were out of a feasibility study.
"As I have stated, this evaluation was for ministry of Finance. In the feasibility study where the estimate was made, it was captured as around 10 million Euros. So the evaluation at that time I believe took into consideration the foreign exchange and was analysing if we’re to buy new ones at that time what would be the benefit. So this evaluation was to ministry of Finance that there is some economic advantage in buying these used ones. So those figures are not figures out of a tender, they are figures that came from an estimate of a feasibility study," Katwebaze added

Rukiga County MP Roland Ndyomugenyi said that the URC officials were not telling the truth as they cannot start the basis of the Shs 36 billion for new locomotives and Shs 48 billion for older ones.

Tom Kimera, a procurement officer at URC was handed over to the parliament's criminal investigations department (CID) to record a statement over the varying costs. - URN/The Observer