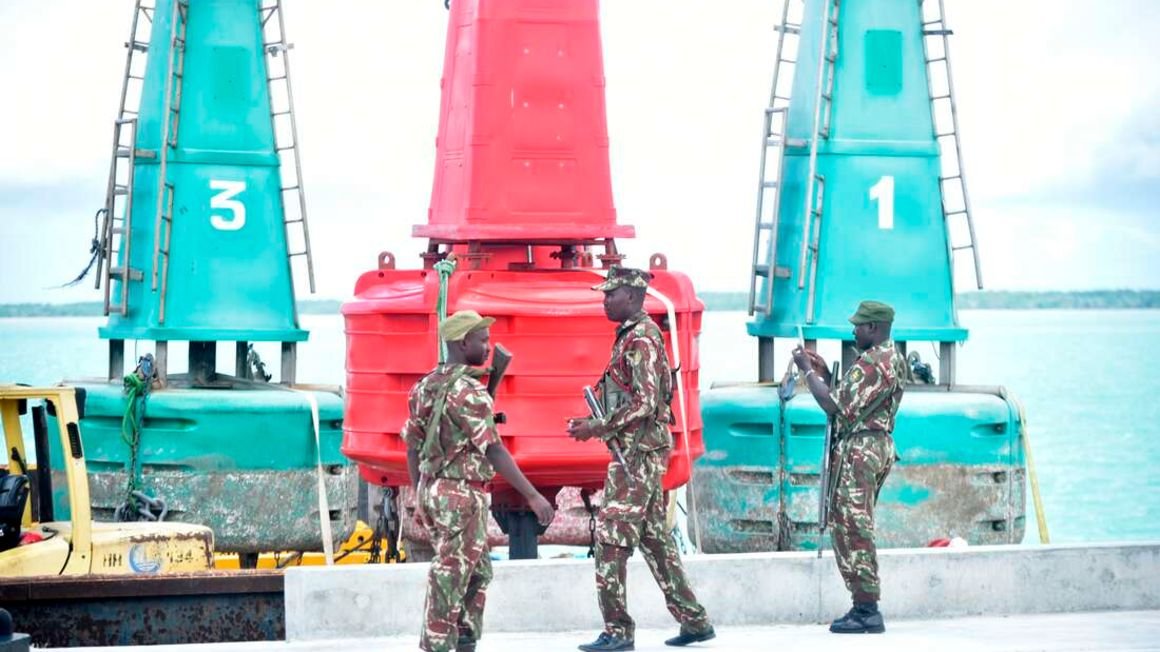 Police officers patrol at the Lamu Port following the arrival of the first batch of equipment on April 28, 2021. Photo KEVIN ODIT/NMG

Officials will start testing operations of the new Lamu port at the end of next month ahead of the June 15 commissioning.

The first batch of equipment including low load trailers, extension cargo handlers and trailers to be used at the multibillion-shilling facility arrived at the port on Wednesday.

The second batch including rubber tyred gantries, forklift and utility vans are expected by mid-next month.

Lamu Port general manager Abdullahi Samatar said testing of the equipment will begin on May 20 before the first vessel from Maersk makes a maiden call to the facility.

“We have complied with all port requirements and have temporary International Ship and Port Facility Security (ISPS) code to use in our berth number one,” said Mr Samatar.

The viability of the port, which has seen the first three berths completed at Sh5.1 billion ($48 million) has been put into question over low demand as it was expected to attract transshipment business, mainly from Ethiopia and South Sudan.

The port is a key part of the wider Lamu Port South Sudan-Ethiopia Transport Corridor, which is being implemented at a total cost of Sh2.5 trillion ($24 billion).

Mr Samatar sought to allay fears the port could become a white elephant project, saying a number of shipping lines have visited the port and were willing to use the facility

Commissioning of the port has been delayed thrice over the past two years on funding shortages and operationalisation of all three berths is likely to be pushed to end of the year as authorities seek at least Sh9.5 billion for the purchase of basic equipment to run the berths.

To make berth 2 and 3 operational, there is a need for the full establishment of the port structure and acquisition of new equipment.

Due to constrained budget, Kenya Ports Authority (KPA) is transferring some equipment and staff from Port of Mombasa to Lamu.

According to an official document from KPA, 263 staff will be deployed to run the facility, the majority of them from Mombasa. - Anthony Kitimo, The EastAfrican