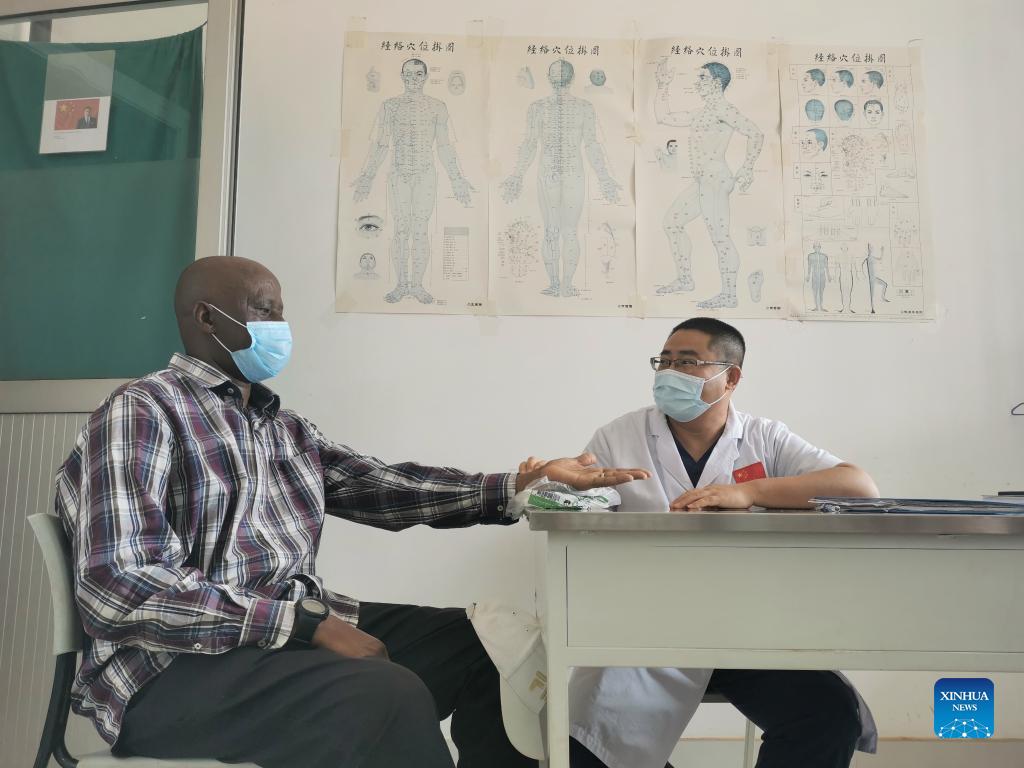 "I am suffering from genital inflammation. I have been suffering from this disease for about one year and a half. The Chinese medical doctors here at Masaka Hospital received me with care. They put me through a diagnostic machine to diagnose my illness. Their healthcare service is efficient and quick," Matie Turinumuremyi, 26-year-old, one of the patients told Xinhua in an interview at the hospital.

He added that he is confident the Chinese doctors will treat him because his colleague has since recovered from the same condition that was successfully treated by Chinese doctors at the hospital.

"My colleague was operated on, by the Chinese doctors, and after three days, he was discharged. When I told him about my condition, he advised me to go to Masaka Hospital and see the Chinese doctors because they are the ones to treat me," said Turinumuremyi.

Turinumuremyi is among dozens of patients suffering from different ailments who were waiting to be operated on by the Chinese doctors, this week.

"I thank the Chinese doctors because we work together as a team and get along well. Whenever there is a patient, they help that patient to access quality medical services without going to other hospitals. This is very important to our hospital's name and reputation," said Marie Aimee Uwiragiye, matron of surgery department at Masaka Hospital.

She added that since the Chinese doctors arrived at the hospital, a lot has changed in terms of improved healthcare services and taking good care of patients.

Damascene Hanyurwimfura, Director General of Masaka Hospital said that the Chinese doctors and nurses at the hospital are specialized doctors in a wide range of medical fields such as gynecology, anesthesia, and surgery among others and have been helpful since they arrived in Rwanda.

"We are very thankful for the Chinese embassy for helping us with Chinese doctors. This is wonderful for our population, because the doctors and nurses are hardworking and very helpful to our patients," said Hanyurwimfura.

He added that "since they arrived, we are seeing positive changes in different medical fields. They are helping our population to access specialized medical care. They are also training our local doctors especially interns and junior doctors to gain experience."

According to Hanyurwimfura, the Chinese doctors are very hardworking and whenever they are needed to attend to patients they come even at night and during weekends.

"There are too many people here who need help," Wu Yao, the leader of the 21st batch of Inner Mongolia aid Rwanda medical team told Xinhua, recalling his biggest feeling in the eight months of working in Rwanda.

There are 15 doctors in total, 10 of them are in Masaka District Hospital, and five are in the provincial hospital in Orientale Province. They are general surgery, traditional Chinese medicine, internal medicine, anesthesia, obstetrics, and gynecology and operating room nurses, said Wu.

According to him, the Chinese doctors also offer traditional Chinese medicine which is now regarded as a new thing in the eyes of local people.

"It is very friendly in terms of treatment effect and cost. The local people have since recognized the culture of Chinese medicine," said Wu.

According to him, local people often seek medical treatment with experts from the Chinese medical team.

Except for obstetrics and gynecology, Masaka Hospital is a general practitioner, and there are no specialists in surgery or orthopedics, he added.

Local patients need to be transferred from the community health center to Masaka Hospital, and then to the higher-level national hospital. Some fracture patients may even have to wait for three to six months before surgery.

Because of the arrival of Chinese doctors, some patients, such as fractures and hernias, can be transferred directly from the community health center to Masaka Hospital for timely and effective treatment, which relieves many patients from suffering.

"A few days ago, the Chinese medical aid team encountered a patient with possible intestinal necrosis in an emergency. The operation was carried out in time. The patient was effectively treated and was discharged on the third day after the operation," explained Wu.

"It can be seen that the spinal anesthesia technique of Chinese doctors is widely spread among local colleagues," added Wu.

On May 17, 2021, 22 delegates from Ghana, Kenya, Malawi, Somalia and Uganda graduated from the Expanded Program on Immunisation Leadership and Management Programme (EPI LAMP), a 9-month certificate programme offered by Yale’s Global Health Leadership Initiative (GHLI) in partnership with the University of Global Health Equity (UGHE) and PATH. These Ministry of Health officials from Gavi-eligible countries are the fourth cohort to graduate from the program, which has been adapted for fully virtual delivery in the context of COVID-19.

As the world continues to fight against the COVID-19 pandemic, leadership and management are essential. These alumni are prepared to maintain continuity of lifesaving routine immunization services and introduce the COVID-19 vaccine. During the virtual graduation ceremony, Dr. Sten Vermund, Dean of the Yale School of Public Health, highlighted, "We are building an immunization workforce that can integrate multiple types of data to identify and solve the complex problems that face us."

This graduation celebrates the resilience and commitment of the five delegations. In the opening remarks, Dr. Ranjana Kumar, Head of Health Systems Planning, Management and Performance at Gavi, highlighted the delegate’s achievements over the last 9 months: "You worked long hours in the middle of the pandemic, even as countries are so busy dealing with the pandemic. It was your thirst for knowledge and professional growth that kept you in this."

EPI LAMP is an innovative management and leadership development experience for teams, in support of Gavi’s mission to ensure every child is protected with life-saving vaccines. Alumni emerge from the programme prepared to manage an increasingly complex EPI programme, with attention to efficient operations, robust performance management and improvement, and effective political engagement and advocacy.

Project focused on reaching nomadic populations in Somalia, improving data quality in Malawi, and increasing coverage of targeted vaccines in Uganda, Ghana and Kenya. Afua Asante Animwaa Twumasi, a member of the team from Ghana, highlighted, "Despite the challenges, we learnt a lot from this program. I personally will not forget our leadership module. For the first time, I learnt about followership in successful leadership and it is helping me now at work. Even though we've completed our breakthrough projects, it will always be on our minds and we will work hard to achieve the goals we set."

Highlights of the virtual celebration, which brought together family and friends of the graduates, Ministry of Health officials, and development partner representatives, included presentation of certificates and a live streaming performance by Angell Mutoni, a Rwandan Poet-Rapper and Singer-Songwriter. - Adeola Ayedun/Sten H. Vermund, MD, PhD, Yale School of Medicine