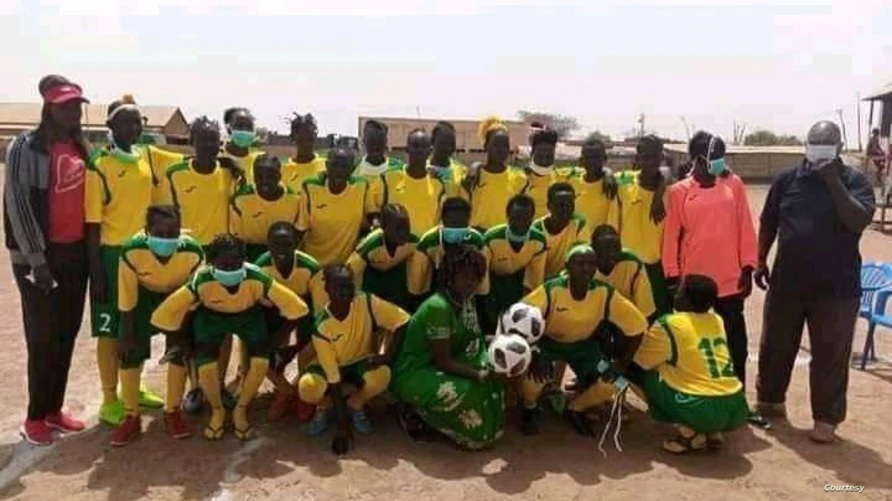 Hundreds of men, women, and children watched as the Aweil Women and the Juba Super Stars squared off in the first match of the league Saturday at Juba’s Buluk playground.

“We have registered the first-ever [women’s] South Sudan league, which is recognized in the system by FIFA. We have made it, and congratulations to all teams! We have started the beginning with the training of the coaches, administration, and now we have kicked-off with the league,” Amin told VOA’s South Sudan in Focus.

The Super Stars beat the Aweil Women 2-0 in the inaugural game, with Suzi Michael scoring the first goal and Emmanuela Satiro scoring the second in the 70th minute of the second half.

In the second round of games Sunday, Bentiu United beat the Kuajok Women 1-0, the Yei Joint Stars trounced the Yambio Women in Yambio 3-0, and the host Torit Women thrashed the Wau Women 8-0. Torit tops the table on goal difference after the first round; Yei is in second place, and the Wau Women are at the bottom of the table.

“Every match, hopefully, we can work with the coaches we trained in January so that we can help them where to improve with also their game plan, technically, tactically mentoring them so that they can transfer that to the girls they are training,” Sdendindi told VOA’s South Sudan in Focus.

Sdendindi said they trained over 90 coaches with the hope of having them teach the sport to players across the country to develop the women’s league.

Booysen recently served as a performance analyst for South Africa's team at the 2020 COSAFA (Council of Southern Africa Football Association) Women’s Championship. Booysen is expected to arrive in Juba later this week to head up the Bright Starlets.

Before becoming a consultant, Sdendindi played in England in the FA Women’s National League for the Queens Park Rangers, the Charlton Athletic Women’s Club, and the London Phoenix Ladies FC.

She says all South Sudanese, including parents, guardians, and men should support girls and give them the chance to showcase their talent instead of marrying them off at a young age.

“You could see from the talent and the fans who came out today, [that] even when they were not allowed to, that the desire is there to support women’s football. Now, we hope we can continue changing the mindsets and the perception of everybody that women can do much more than stay at home, get pregnant, get married off,” Sdendindi told VOA.

She says she is living proof that an African woman can be a player or even an administrator in the sport.

South Sudan’s culture, youth and sports minister Dr. Albino Bol, said the women’s league is important because it encourages South Sudanese from different communities to interact with each other and find common ground.

“Peace cannot be achieved if we are not socializing among ourselves. Socialization among our tribes through peaceful coexistence is what will bring peace and sport is one of the social activities that can bring peace to the nation in a very simple way, so I want to thank FIFA, CAF and the football association of South Sudan under the leadership of Francis Amin for coming up with this great event,” he said. 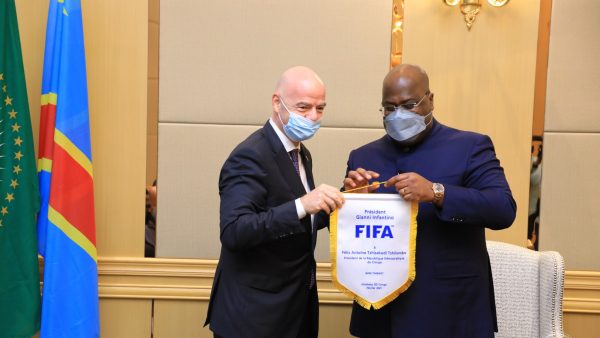 The president of the International Football Federation (Fifa) Gianni Infantino launched Saturday the project to organize a school championship in the Democratic Republic of Congo that will be replicated at the African level, in the presence of President Felix Tshisekedi, current chairman of the African Union (AU).

“We launched today a project of a competition, a school championship here (in DRC) but we will replicate this throughout Africa from (the Congolese experience) because education, schools and football must be in symbiosis,” Gianni Infantino told the press.

“We have a problem at the sporting level, but as Fifa has just allowed us to go back to the grassroots in schools, it allows us to have athletes who have a good level. It also allows our children to be physically strong,” said Congolese Sports Minister Amos Mbayo.

This is the second time that the world football boss has visited the DRC after his first visit in November 2019 in Lubumbashi, during festivities marking the 80th anniversary of the Congolese club that has won the most titles in African football competitions: TP Mazembe.

The president of the Fifa closed by Algiers an African tour started since Tuesday which led him to Nouakchott (Mauritania), Bangui (CAR), Brazzaville (Congo) and Kinshasa (DRC), according to a program received by AFP/HowAfrica 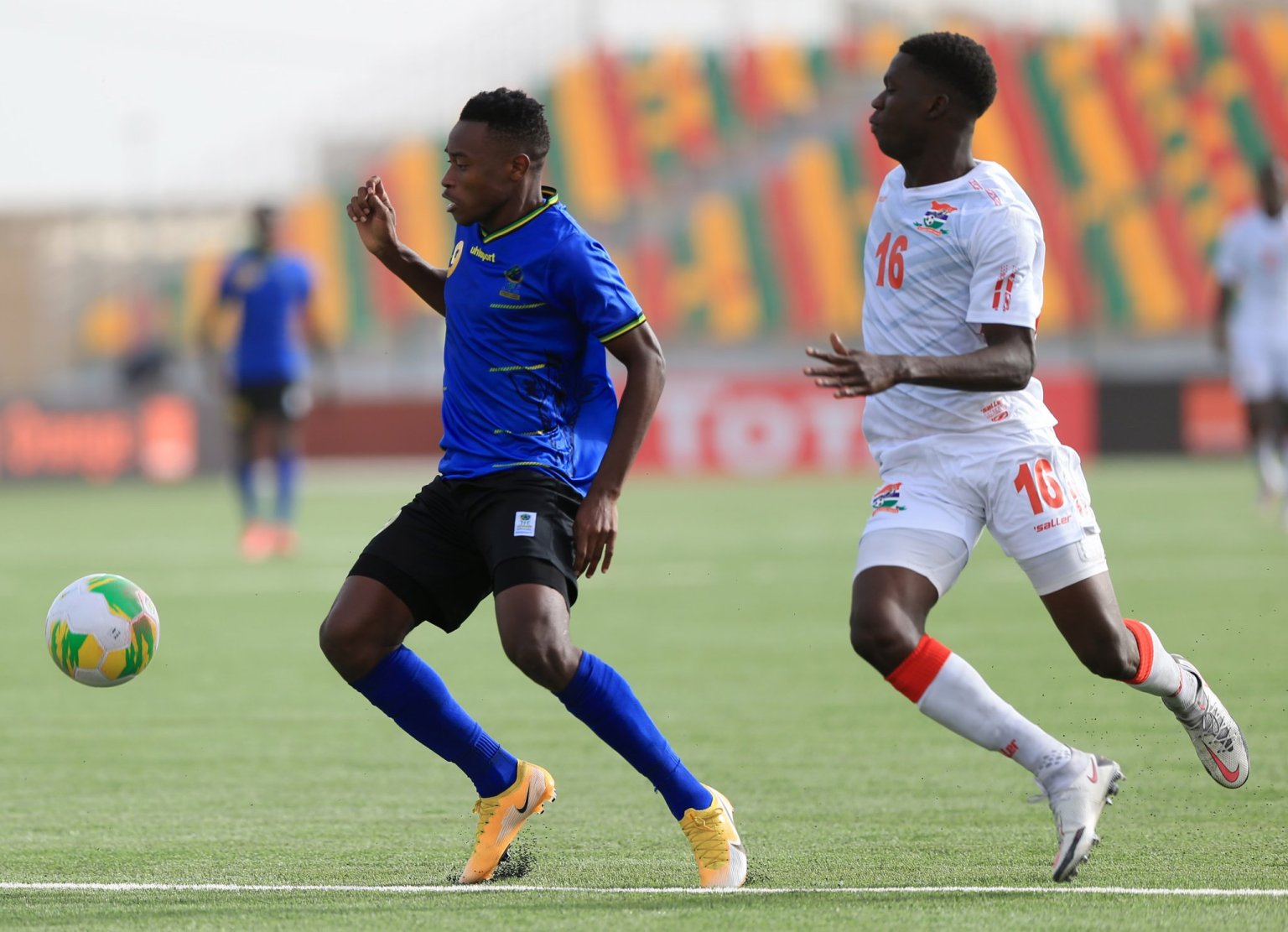 Midfielder Novatus Dismas scored with two minutes left on the clock as Tanzania rallied from a goal down to hold Gambia to a 1-1 draw in their second Total Under-20 Africa Cup of Nations (AFCON) Group C match in Nouadhibou on Friday.

Gambia looked set to pick a win and rekindle their hopes of progressing to the knockout phases, but Dismas’ freekick from range ensured that Tanzania also kept their belief until the final day of the group stage.

Momodou Bojang’s expertly taken first half volley had put the Young Scorpions ahead of the Ngorongoro Heroes.
Bojang swivelled the Gambians into the lead in the 38th minute, making amends after missing several close opportunities. The lanky forward left the Tanzanian keeper dazed after swinging in a first time volley, connecting Drammeh Kajally’s well weighted cross from the right.

Before that, he had missed several close chances.

In the 25th minute, he completely miscued his shot after being picked out by another of Kajally’s brilliant deliveries while four minutes later, he sent a diving header wide off Habibou Mendy’s freekick after beating the offside trap.

Before that, Gambia had a chance with Mass Njie’s connection off a Mendy freekick going over while Tanzania also had an opportunity via Ben Starkie’s low shot from distance which was saved by the Gambian keeper’s legs.

In the second half, Tanzania came back stronger as they pitched camp in the Gambian half in a bid to get back into contention. Gambia almost nicked one on the counter, but Bojang could not beat the keeper one on one after being put through on goal.

Tanzania continued to pile in the pressure, planting ball after ball behind the Gambian defense as they looked for the single goal that would take them back into the game. Dismas had a go at goal with 15 minutes remaining with a volleyed shot from the edge of the box which went over.

However, his persistence paid off with two minutes of regular time left. A freekick from 25 yards out presented an opportunity for the lanky midfielder and his arrowed shot at goal took an awkward bounce infront of Gambian keeper Lamin Saidy before skipping into the net.

Gambia should have won it just immediately Tanzania scored, but Drammeh’s close range drive came off the post.

The goal breathed relief for the CECAFA representatives and they will now have all to play for when they face off with Morocco in the final match of Group C on Monday. Gambia who lost their opening game 1-0 to Morocco will face off with Ghana in their final match of the group. Soka25East