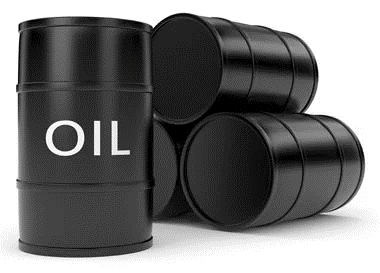 Libya has overtaken Nigeria as the biggest producer of crude oil in Africa based on the latest report by the Organization of the Petroleum Exporting Countries (OPEC).

Before overtaking Nigeria, Libya had previously leapfrogged Angola into second place but has now overtaken Nigeria as well to claim the status of Africa’s largest oil-producing country.

The reduction in Nigeria’s crude oil production were blamed on lack of investment in oil-producing facilities and the challenges of recurring militant attacks on key pipelines.

“However, soft demand from Asian refiners for Atlantic Basin crude amid unfavourable west-to-east arbitrage capped the rise. Crude differentials of Bonny Light, Forcados, and Qua Iboe rose firmly on a monthly average in October by 70¢, $1.06, and 75¢, respectively, to stand at premiums of 10¢/b, 27¢/b, and 4¢/b,” it added.

A London-based economic research firm, Capital Economics, said while the issues affecting reduced oil production might be resolved, it may not have much impact on the general trend of undersupply in the oil market.

“Once again, Angola and Nigeria were largely responsible for this undershoot. Operational issues brought about by a lack of investment in oil-producing facilities continue to plague output in both countries, while Nigeria is also grappling with recurring militant attacks on key pipelines,” it said.

It added that, “This will do little to alleviate the signs of undersupply in the oil market. For example, the price spreads between front-month futures and longer-dated futures are now as negative as any time in recent years, which normally indicates a lack of near-term supply.

“Despite persistently undershooting its target, we doubt OPEC will make any major changes to its output policy at its next meeting on December 2. Admittedly, external pressure on the group has continued to grow, with the US now reportedly considering a release of oil stocks from its strategic reserve.” 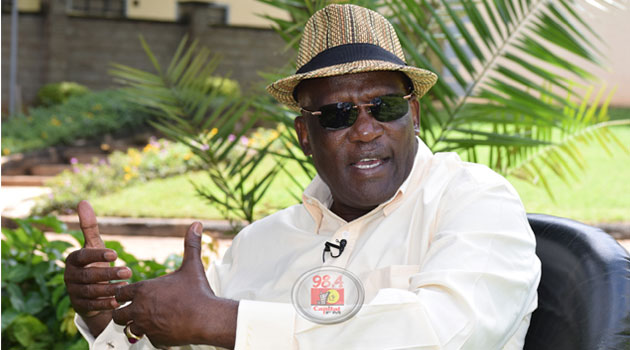 The United Democratic Alliance (UDA) has called on the Independent Electoral and Boundaries Commission (IEBC) to take action against ODM following the chaos in Kondele on Wednesday where Deputy President William Ruto’s convoy was stoned by unruly youth.

UDA National Chairperson Johnson Muthama said IEBC should consider disqualifying ODM from the upcoming general elections slated for August 9, 2022 to send a strong message that election violence will not be condoned.

“The IEBC need to come out in force and say in no uncertain terms will it allow politicians inciting Kenyans to contest in the elections,” Muthama said in a statement released on Thursday.

Muthama further said that the violence that was witnessed in Kondele is a wakeup call not only to the electorate, but also the institutions charged with ensuring a peaceful election and transition in 2022.

He blamed various government institutions tasked with ensuring peaceful co-existence for their failure to act on such issues.

He pointed out one such incident where Jimi Wanjigi, another presidential aspirant, was stoned in Migori County saying the government is yet to address the incident to date. Wanjigi who is eyeing the ODM ticket has been pushing for the selection of the party’s candidate through credible primaries as opposed to direct nomination.

“Curiously the Kenya Police, National Cohesion and Integration Commission (NCIC) have remained aloof and have not acted in a way that would inspire confidence from Kenyans,” he added.

He also rubbished the statement by police headquarters that Ruto had been warned against visiting the area.

“Yesterday Kenya Police issued a lame statement stating that the Deputy President had been warned of chaos prior to the visit. Nothing could be far from the truth,” he said.

“The question that police should answer is when did they know about the chaos and what did they do about it to ensure the stoning does not happen and it is stopped?” the former Machakos Senator asked.

Muthama further blasted the NCIC under the leadership of Samuel Kobia for failing to take action against leaders inciting violence among Kenyans.

“The NCIC has been lethargic and carefree at best. This is a commission best known for organizing workshops at top hotels with nothing to show for it. The commission should by now have arrested an emerging pattern where politicians of certain political earnings have been using words that can be construed as intended to incite Kenyans,” Muthama stated.

He pointed out that UDA is committed to peaceful elections and has warned aspirants who engage in violence that they will be disqualified.

ODM party leader Raila Odinga who distanced himself from the chaos which left several vehicles destroyed accussed Ruto of provoking the youths.

The Office of the Deputy President had issued a strong statement tolling off the National Police Service (NPS) for failing to act to pre-empt chaos witnessed during the rally.

Ruto’s Press Secretary David Mugonyi faulted the police for permitting the chaos by failing to act on aggressors.

“The reckless deployment of criminal elements to tarnish their well-earned reputation of patriotism and robust democratic commitment is unfortunate and has no place in the Kenya we want,” Mugonyi said while describing hustlers, a constituency of Kenyans at the bottom of the pyramid Ruto has pledged to empower through his bottom-up economic blueprint, as peaceful people.

“The statement by the National Police Service, which carelessly profiles people in regrettable terms, underscores the fact that they had intelligence on the criminal conspiracy to perpetrate lawlessness in broad daylight, and ample opportunity to stop it and facilitate a peaceful event, but consciously opted to engage in political mischief instead,” he added.

Mugonyi also dismissed assertions by NPS that the violence was triggered by a disagreement on funds provided to mobilize residents for the rally. Bruhan Makong, Capital FM 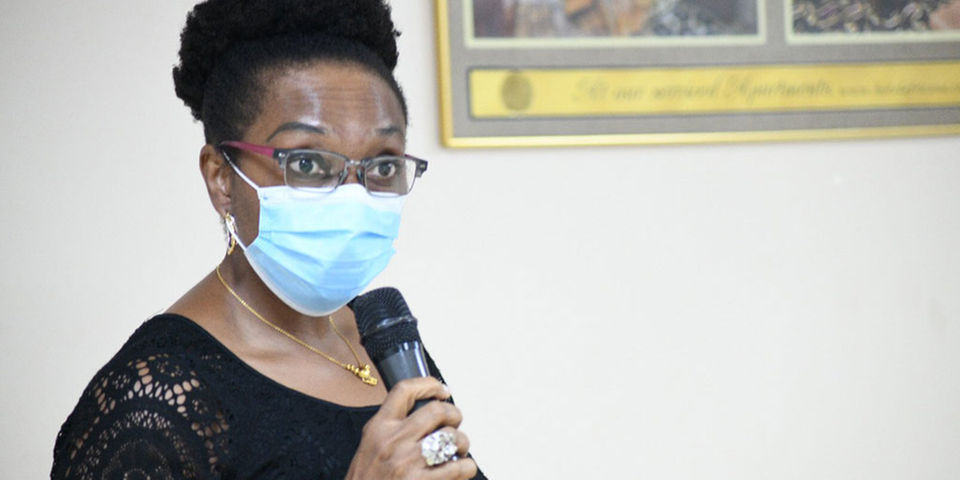 The United Nations (UN) Women Uganda have called for participation of more women in peace and security promotion in the country saying it enhances their efforts as actors in a nation’s development.

This was revealed during the commemoration of the 21st anniversary of United Nations Security Council Resolution 1325, on women, peace, and security, (UNSCR) and dissemination of the National Action Plan (NAP) II in Kampala on Tuesday.

The resolution was unanimously adopted by the UN Security Council on October 31, 2000, after recalling resolutions 1261, 1265, 1296, and 1314.  It acknowledges the disproportionate and unique impact of armed conflict on women and girls.

The UN Women deputy country representative Ms Adekemi Ndieli said promoting women participation and rights is not a suggestion to women but it’s a must in preventing and resolving conflicts and also sustaining peace.

“When women are involved, the likelihood of reaching peace agreement is significantly higher and also peace last longer. Including women in high positions is not about counting women but it’s about making women count,” she said.

Ms Ndieli added: ‘‘Through the implementation of NAP III, all stakeholders must ensure that there is meaningful participation of women regarding peace and security and UN, we pledge to support the promotion this agenda.’’

Ms Hellen Nambalirwa from Makerere University Peace Centre said that in the NAP III, government should embrace a holistic approach through the ministry of gender, labour and social development which promotes peace and security among women.

“We need policies and laws that will enhance women efforts as actors. You may say that there are many laws but there is that missing link,” she said.

Uganda was among the first countries in Africa to develop the NAP in 2018, which according to labour minister Betty Amongi is a ‘‘State mechanism to strengthen women presentation and participation in peace and security.’’  By Shabibah Nakirigya, Daily Monitor 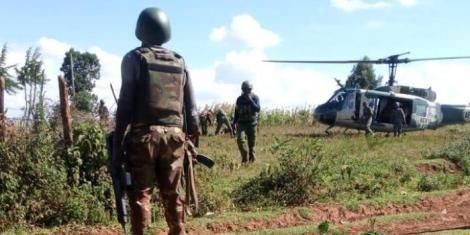 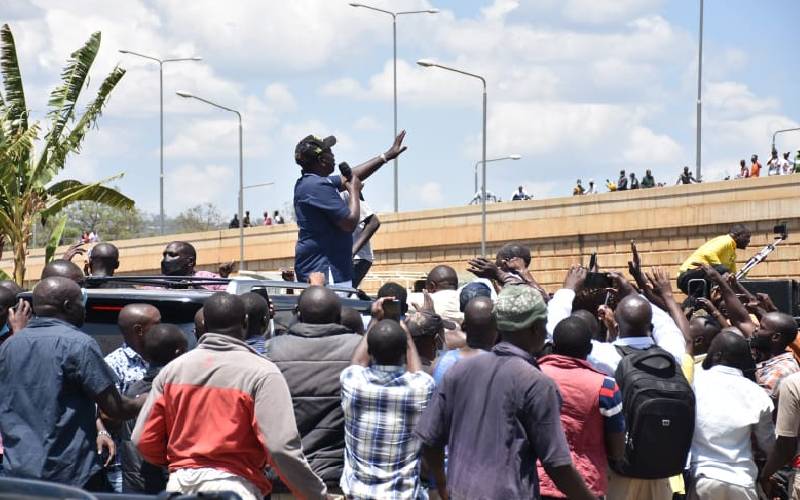 Police spokesperson Bruno Shioso has said the tension was due to dispute over the distribution of campaign funds.

A crowd has disrupted Deputy President William Ruto’s Wednesday tour of Kondele Ward in Kisumu Central Sub-County. Ruto is in Kisumu to sell his presidential agenda.

As he passed through Kondele, some youth pelted his convoy with stones. Police officers in at least four Toyota Land Cruiser vehicles were deployed to the scene to restore normalcy.

When Ruto was addressing the crowd from his vehicle’s sunroof, a section of rowdy youth then started heckling him. The DP was forced to cut short his speech which had lasted barely five minutes.

Shioso said Ruto's team was warned and asked to skip Kondele during the Nyanza tour.

"During the rally, violence erupted amongst the local agitated groups who engaged in stone-throwing and other unruly behaviour," he added.

Police responded promptly to contain the situation and provide security to Ruto, his entourage, the public, and property, in the process, tear gas was discharged.

DP Ruto left the scene and no injuries were reported, but some vehicles were destroyed.

Ruto had earlier made successful addresses on Obote Road and Jua Kali in Kisumu Central.

In his speech, the DP urged the residents to vote for him in the 2022 presidential election, saying he was the best bet to economically elevate the low and middle-income earners in the country. By Jael Mboga, The Standard