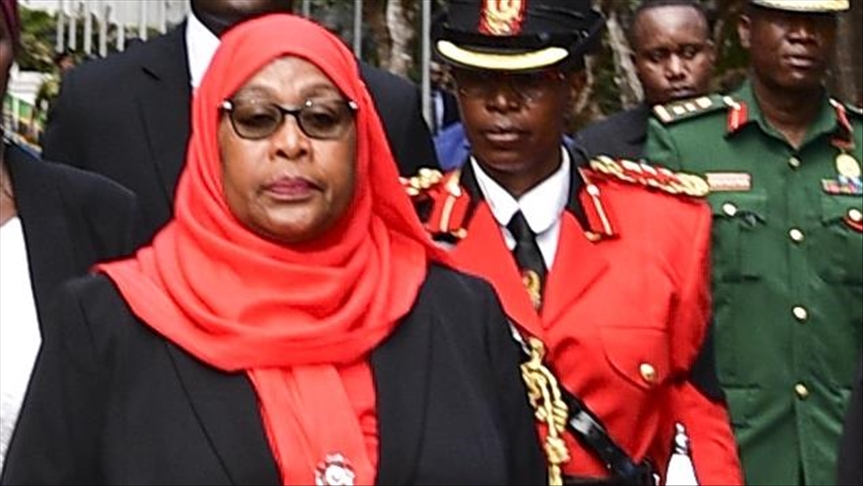 President of the United Republic of Tanzania. Photo Presidency of Tanzania - Anadolu Agency

The president of Tanzania arrived in Burundi on Friday for a two-day official visit to rekindle bilateral ties with its northwestern neighbor.

"I have come to Burundi to sustain a long-standing relations between our countries," said Samia Suluhu Hassan after holding private talks with her Burundian counterpart Evariste Ndayishimiye in the city of Bujumbura.

This was Hassan's first visit to Burundi since she came to office after the death of her predecessor John Magufuli.

Arriving at the statehouse in the city of Gitega, Hassan received a 21-gun salute as a military band played the countries' national anthems before heading inside for private talks with Ndayishimiye behind closed doors.

Burundi is a strategic partner of Tanzania in trade and other areas. The small country, which has suffered decades of civil strife, depends on Tanzania for transportation of more than 80% of its goods through the Dar es Salaam port on the Indian Ocean coast.

Available statistics show that the trade volume between Tanzania and Burundi has increased from over $36 million in 2015 to more than $86 million in 2019, with at least 95% of Burundian cargo imported and exported through Dar es Salaam.

Earlier this year, the two countries resolved to strengthen cooperation in strategic areas, including economic infrastructure, to ease the transportation of people and goods.

According to Hassan, the Tanzania Investment Centre (TIC) -- which oversees local and foreign direct investment, has registered 18 Burundian projects worth $209.4 million and employing 3,544 Tanzanians.

The president is scheduled on Saturday to address a Burundian business forum with firms from both countries to explore business opportunities. - Kizito Makoye, Anadolu Agency 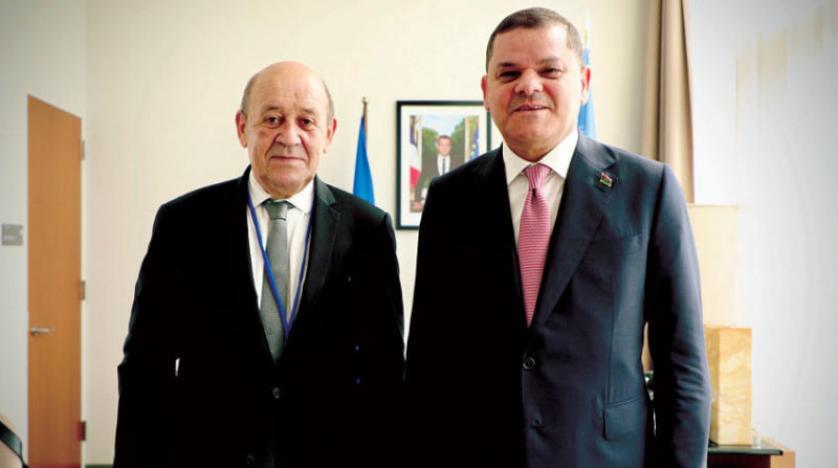 “I am deeply concerned about the wider ramifications of the stalemate in the political, electoral track.”

The Security Council issued a statement welcoming the conclusions of the second Berlin Conference on Libya and the collective efforts of Member States and regional and international organizations to assist the Libyan people in their quest for unity, peace, stability, and prosperity.

“I have advised the Speaker of the House of Representatives to consult with the High Council of State in line with the Libyan Political Agreement and to ensure that the legal and constitutional bases are in place for holding the elections on December 24, as per UNSCR 2570, Berlin-II conference conclusions and the Libyan Political Dialogue Forum (LPDF) Roadmap,” said Kubis.

He stressed the need to “safeguard and advance the course to national inclusive, free, and fair parliamentary and presidential elections this December.”

The envoy called for increasing engagement with the Civil Society, including women and youth of the country. The Security Council strongly urged the relevant authorities and institutions to take immediate action to clarify the constitutional basis for the elections and enact legislation to allow sufficient time and resources to prepare for the national presidential and parliamentary elections.

“I also urge members of the LPDF to put their differences aside and come to an agreement on a proposal for the constitutional basis for immediate consideration and adoption by the House of Representatives, so that elections may be held on December 24,” stressed Kubis.

Meanwhile, the US Permanent Representative to the United Nations, Linda Thomas Greenfield, stressed that a political solution in Libya is possible, describing it as “necessary” and “urgent.”

However, she indicated that it requires elections on December 24, as planned, and parties must come together to ensure that happens by putting the needed legal and constitutional frameworks in place.

According to Greenfield, the Security Council must also continue to support efforts to resolve the issues surrounding military de-escalation and call for the immediate departure of foreign forces and mercenaries.

For his part, Dbeibeh said that holding the general elections on their scheduled date is a “national and historic choice.”

The Libyan people are entitled to elections on December 24, and fulfilling that pledge requires solidarity and close cooperation among all sides, according to Dbeibeh, who said that his administration is doing its part with the allocation of funds to the electoral commission.

He called on the House of Representatives and the High Council of State to assume their responsibilities and reach a consensus for elections to be held on time.

Meanwhile, the French Foreign Minister warned during his speech that any party in Libya obstructing the political process could face international sanctions.

The electoral calendar must be respected, while foreign forces and mercenaries, whose presence violates Council resolutions as well as Libya’s sovereignty, must withdraw, he added.

For his part, the Secretary-General of the Arab League, Ahmed Aboul Gheit, indicated that the positive momentum that began with the first conference, including implementation of a ceasefire, formation of a Government of National Unity, and agreement on election dates, must continue to serve the interests of the Libyan people who have placed their hope in this process.

Aboul Gheit affirmed the League’s interest in holding the elections, noting that it will be a milestone to save Libya and preserve its sovereignty and territorial integrity; re-opening the discussion of the December 24 date will only generate further conflict. ASHARAQ-AL-AWSAT

Burundi's main opposition party, CNL is raising the alarm over what it describes as broad daylight abduction of a number of people on Friday 9 July in front of witnesses.

After the latest grenade attacks in the city of Bujumbura, armed ambushes on the roads such as the one in Rutegama, Muramvya province towards the centre of the country, which left more than ten people dead, abductions have followed, leader of the party, Agathon Rwasa has said.

The most targeted were members of the CNL party (National Congress for Freedom) and we now have forced disappearances of some local leaders of the party. This to Rwasa is a huge source of concern.

Elie Ngomirakiza, one of the leaders of this party in Mutimbuzi commune, Bujumbura province, western Burundi, is reported to be missing, and some dead bodies were discovered, according to a statement from the party.

"Why is it that in a country where the death penalty has been abolished, when someone is arrested, they are not brought before the courts so that the justice system can decide on their case?" Rwasa lamented.

And if the Constitution of Burundi recognises multiparty system, and if the CNL is an approved party in accordance with that law, why should our militants, our supporters be treated in this way? I am talking about all these other people who are reported missing here or there, who are found killed here or there, and that each time we hasten to bury instead of conducting investigations to identify the victims in order to be able to trace the perpetrators of the crime? Agathon Rwasa, opponent and president of the CNL.

To those who might think that he (Agatha Rwasa) would be closely or remotely linked to those who set up these ambushes, his answer is very clear. He simply asks for the release of all prisoners of conscience, the party said.

"We're used to it. But I think it's foolish for someone to attribute these kinds of things to me. In any case, when I said to myself that I had to go to war, I went to war. It's not just talk. It would be clumsy to do so. If we are in a democracy, we have to fight with ideas. In a democracy, we must not be afraid of the opposition. Let everyone be respected and let the dignity of each citizen remain inviolable. If someone is at fault, there are courts for that. And to have the right to fair justice. Justice must be independent. We must free all these prisoners of conscience from all sides". the party statement read.

For the latest armed ambush in Rutegama, about 70 km from Bujumbura, towards Gitega, the political capital, no official toll has been provided by government authorities.

The Ministry of the Interior, Community Development and Public Security simply indicated, via a tweet, that there were dead men and burned vehicles. - Africanews 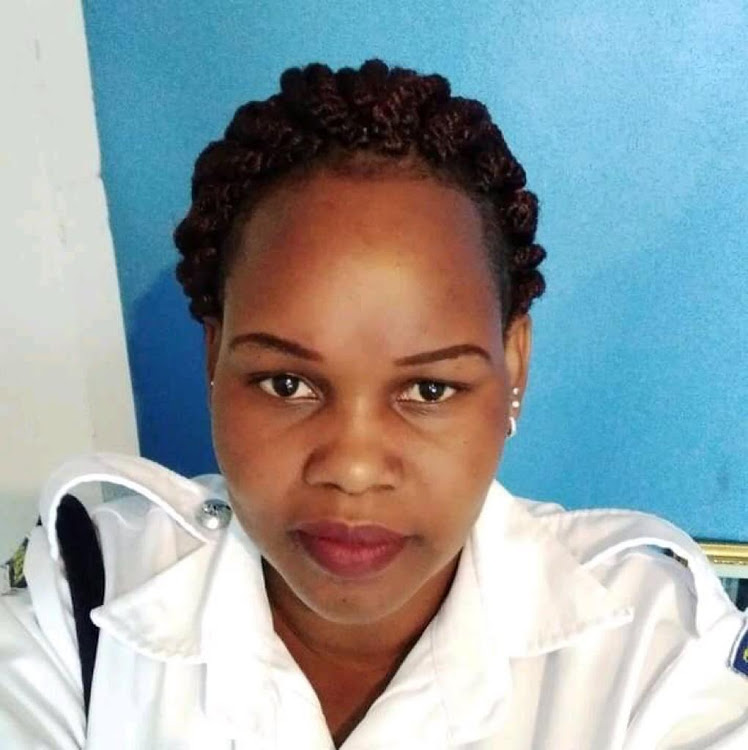 Corporal Carol Kangogo who is on the run for killing two men. Image: COURTESY

Police said they narrowed down on her last night and have been there all night.

• Police said they narrowed down on her on Thursday and have been there all night.

• "She shot herself in their bathroom using a pistol she had," police told the Star on Friday.

Police said they narrowed down on her on Thursday and have been there all night.

"She shot herself in their bathroom using a pistol she had," police told the Star on Friday.

The incident happened at about 7.30 am Friday at Nyawa village, Tambach division in Keiyo.

Her parents called police who found the body in a pool of blood in the bathroom.

“We are told the mother found her holding a pistol which she used to commit suicide in the bathroom in their rural home,” he said. 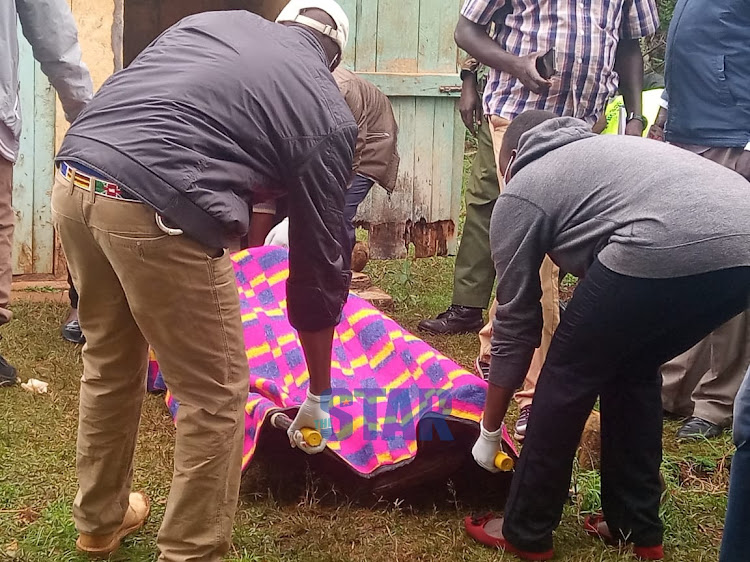 She still wore her yellow hood at the time of the incident. These are the same clothes she wore when she killed two men on July 5, 2021.

This marked the end of her hunt, which had been ongoing for two weeks. Elgeyo Marakwet county commander Patrick Lumumba says according to initial investigations that she is thought to have arrived home at about 7.30 am and went straight to to the bathroom.

She had one bullet shot on the front head.

"Not even the parents who were in the home about 30 meters from the bathroom had the gunshot," Lumumba said. 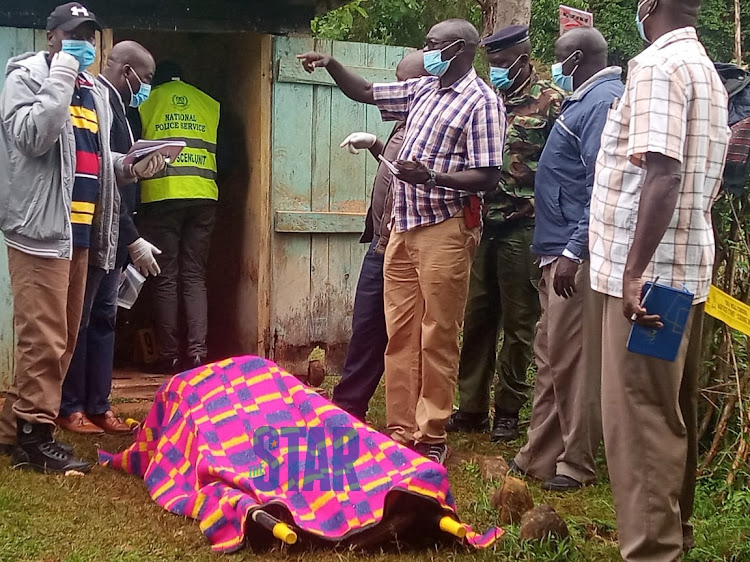 He said they had been searching for her and no one new how she got to the home and entered the bathroom through a fence.

Lumumba said no one saw her enter the bathroom.

Her mother who was going to shower early in the morning found the body and raised alarm. Family members wailed as the body was removed.

Lumumba also declined to confirm if the home was under guard as the officer was being sought.

"That is our work and we know how we were searching for her. It's unfortunate it's ended this way," he said. 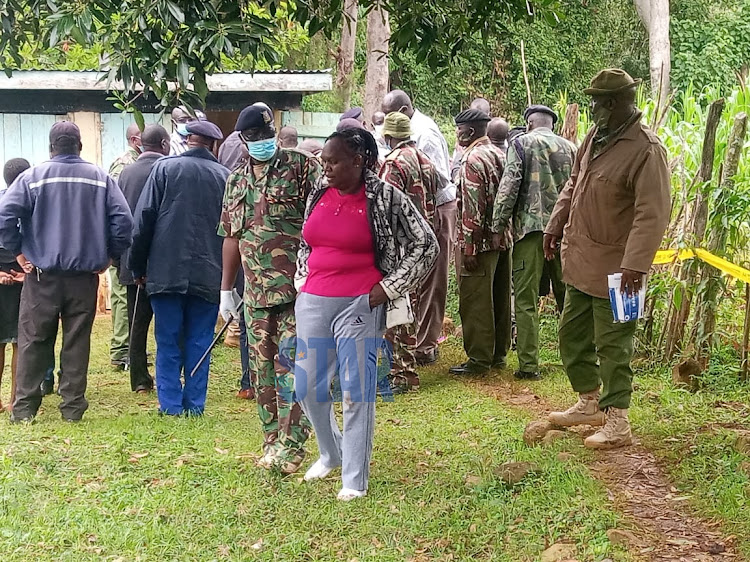 Kangogo is a suspect in the killing of two people, including police Constable John Ogweno, in Nakuru on Monday, July 5.

She later allegedly shot dead Peter Ndwiga Njiru, 32, in a lodging in Juja, Kiambu county, about 200km from where the police officer died.

An autopsy showed Ogweno died of a haemorrhage. Njiru's autopsy said he died out of bleeding from the head. 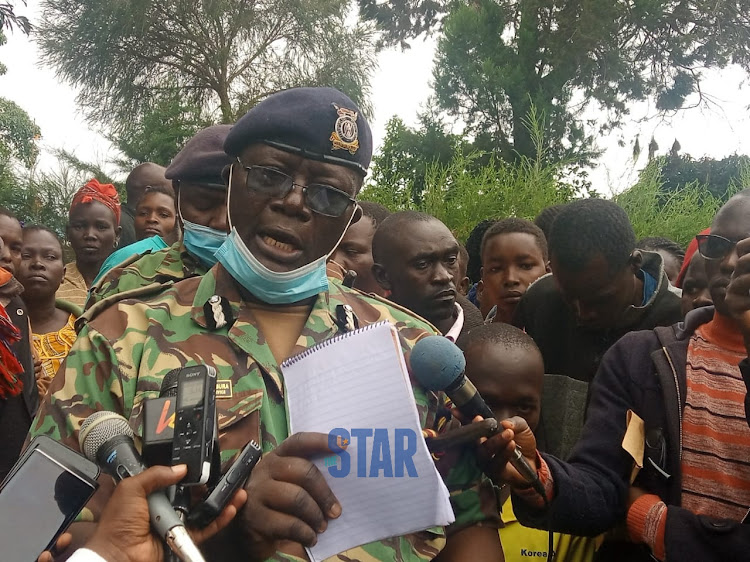 Ogweno’s firearm with 15 bullets is yet to be recovered but police said they found some of his clothes in Kangogo’s house.

Police have recovered one of her phones, which was dumped in Nakuru.

One officer revealed Kangogo and Njiru met at the station when he went to report about an incident in which a female worker had apparently stolen from him about Sh100,000.

In the course of the investigation by Kangogo, they fell in love. The case went cold after the said staff swore to reveal why she took the money.

The two have since been lovers until she killed him in a lodging. Police say Kangogo had apparently taken a loan of about Sh500,00 together with Ogweno which could be a factor in her actions. 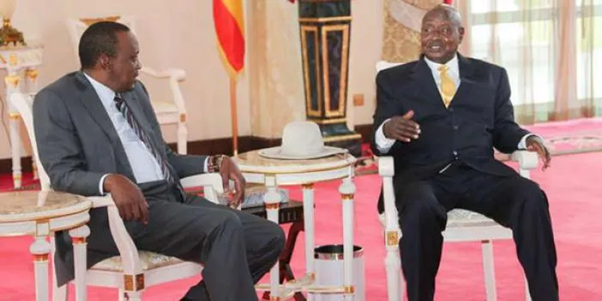