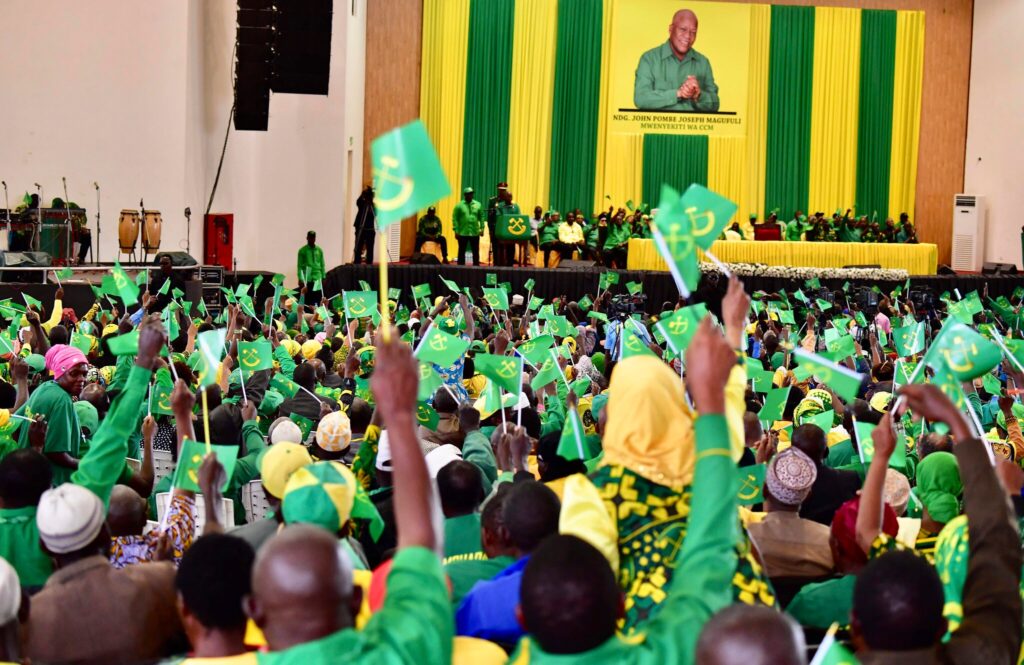 Tanzania’s dominant ruling Chama Cha Mapinduzi party has opened direct talks with main opposition CHADEMA party in effort to ease tensions that have threatened to tire down the country.

The two sides have been at war every election cycle. CHADEMA leaders have survived multiple assassination attempts, forcing them to flee the country especially under former President John Pombe Magufuli.

Immediately following the 2020 polls, the opposition leader Tundu Lissu had to be aided to leave the country by European embassies in a negotiated exit. The government was determined to put him behind bars, along with many of his colleagues.

Current President Samia Hassan Suluhu who took over in March last year following sudden death of Magufuli whom she had been deputizing.

The President immediately embarked on a reconciliation with Lissu, meeting him in Belgium early this year where they held face to face talks.

For years, the opposition has demanded for constitutional reforms to create level playing field during the elections that have been dominated by CCM for decades. The opposition accuses CCM of dominating all institutions that directly deal with elections.

It has emerged that CCM and CHADEMA have held direct talks twice recently to iron out their differences. It is something that had never been envisaged before.

CCM party’s head of ideology and spokesman Shaka Hamdu Shaka told the media on Wednesday that CCM was committed to constitutional reform and fully backed President Suluhu’s reconciliation efforts with the opposition.

The party spokesman was informing the country about deliberations of CCM’s National Executive Committee (NEC), the party’s told organ.

The NEC has directed the government to revise the process of writing a new constitution, saying the country needs reforms that would meet the current needs.

NEC said it is the ideal time for a new constitution and tasked the government to come up with the best practice to revise the constitutional reform process for the vested national interest and development.

NEC described President Suluhu as a “mature diplomat and outstanding politician” for her reconciliation initiatives.

“President Samia’s determination has proven to the country and the world that she is politically and diplomatically well versed especially for her guts to choose the political reconciliation path with opposition parties to unify the nation,” said the CCM spokesman.

Shaka said President Suluhu’s determination, boldness and vision to open up reconciliation doors has won hearts of the committee, saying the move will bring up political harmony for the betterment of the nation’s unity.

The CCM’s top organ also called for swift hearing and ruling of the political cases pending in various courts in order to bolster reconciliation and political stability.

The ruling party also vowed to maintain a fair playing field for all political parties, as a way of promoting reconciliation and cementing national unity. The Chronicles 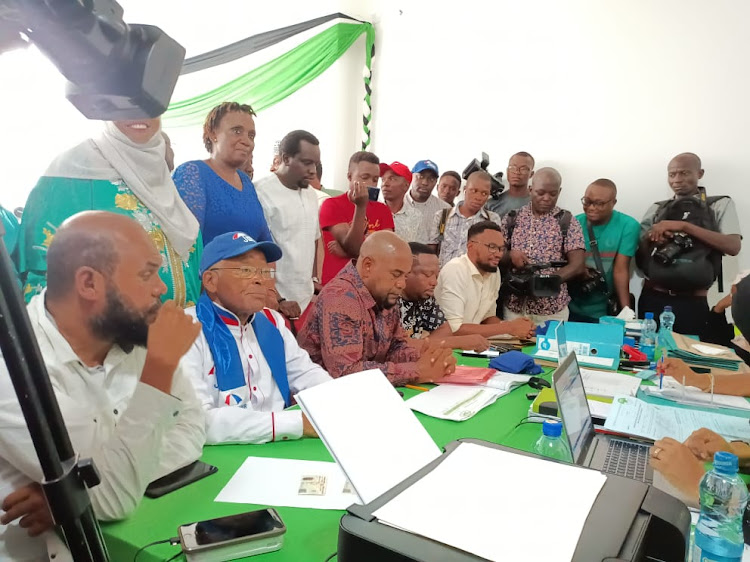 There was a three-hour stand-off as former Nairobi governor Mike  Mbuvi Sonko’s and his team vowed not to leave the Kenya School of Government (KSG) Mombasa without being cleared to vie for the governor's seat.

IEBC had pitched tent at KSG where they were clearing candidates for various elective seats.

Sonko arrived at the Mombasa KSG at 2:15 pm, accompanied by his running mate Ali Mbogo, who is also the current Kisauni MP and former Matuga MP Chirau Mwakwere and hundreds of supporters.

Sonko's ambitions to be elected the next Mombasa governor in the August 9 General Election hit a dead end after IEBC denied him clearance.

Swalhah also said the three-judge bench's decision to quash IEBC from disqualifying Sonko from vying, “did not order IEBC to clear Sonko to vie for Mombasa Governor seat”.

The decision of the court (three-judge bench) had quashed what the IEBC chairman had said but did not order the IEBC to clear Sonko, the IEBC officer argued.

"In as much the High Court quashed the decision of the chairman as you say, it did not give or direct the commission orders to accept his papers. We stand by the chair’s decision. Sonko is blocked," said Swalhah.

Sonko’s lawyer Titus Kirui accused Swalhah of contempt of court, saying that she was going against the orders of a three-judge bench.

“You are an agent of IEBC, but will be held personally responsible for going against orders issued by a three-judge bench,” said Kirui.

Sawalha also argued that Sonko had breached Article 75 of the constitution.

However, Kirui argued that Sonko has not been charged for that, therefore Swalha cannot peg on it her decision to disqualify Sonko.

The RO directed Sonko and his team to seek reprieve from the IEBC Dispute Resolution Committee, which will be sitting from June 10-19.

"I am ready to stand with and defend my decision at that point," she has said. By Onyango Ochieng, The Star 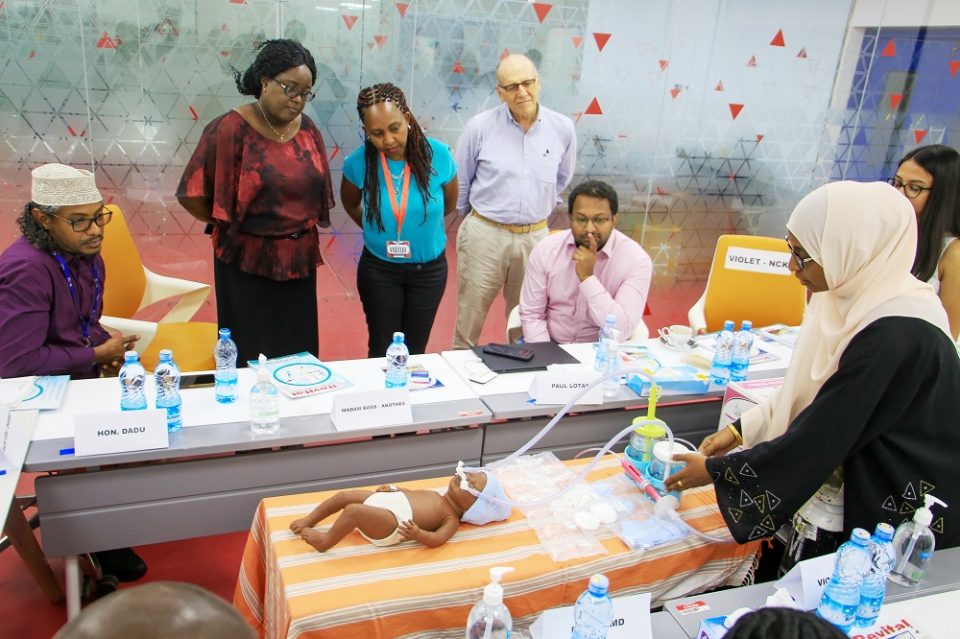 Revital Healthcare (EPZ) Limited becomes the world’s first manufacturer of a respiratory device that supports neonates and infants with breathing problems without the need for electricity.

The Kilifi County-based firm has once again put Kenya on the global map with this latest respiratory facility.

The Vayu Bubble Continuous Positive Airway Pressure (bCPAP) system provides blended oxygen to infants without the use of electricity.

It is considerably cheaper, portable, has components that are re-usable after sterilization, and could be used at any hospital in any part of the country, compared to the normal CPAP systems in the market.

Already, the firm has shipped 120 units to Ukraine as a donation to the troubled country in conjunction with UNITAD.

Shah said such babies may need to be placed in incubators where there may or may not be controlled the oxygen provided to them, which may lead to various other conditions like blindness, lung damage, brain damage or even death.

According to the World Health Organization, respiratory distress is a leading cause of global child mortality, with nearly 1.1 million neonates dying annually because of preterm birth complications in South Asia and sub-Saharan Africa.

County Health Executive Charles Dadu disclosed that over 1,000 cases of neonatal complications are recorded in the 120 functional delivery rooms annually.

“Out of these, 40 per cent (about 400) die out of the complications and the Vayu bCPAP system will help reduce the mortality rate,” said Dadu.

The health executive said after the adoption of the respiratory kit in the hospitals, 10 babies’ lives were saved.

Speaking during the ceremony, Maternal and Child Health Ambassador Dorothy Nyong’o, the Kisumu county First Lady, said in Kenya, two out of 10 children who present difficulty in breathing will die because of lack of adequate equipment to save their lives.

Already, the devices are in use at the Kenyatta National Hospital, Coast General Teaching and Referral Hospital and Kilifi county referral hospital, in Kenya, the Muhimbili National Hospital in Tanzania and over 15 other countries globally.

CPAP systems exist in the market already but these use electricity thus limiting use to specific hospitals and are expensive, with one costing at least $1,500 (approximately Sh175, 000). KNA