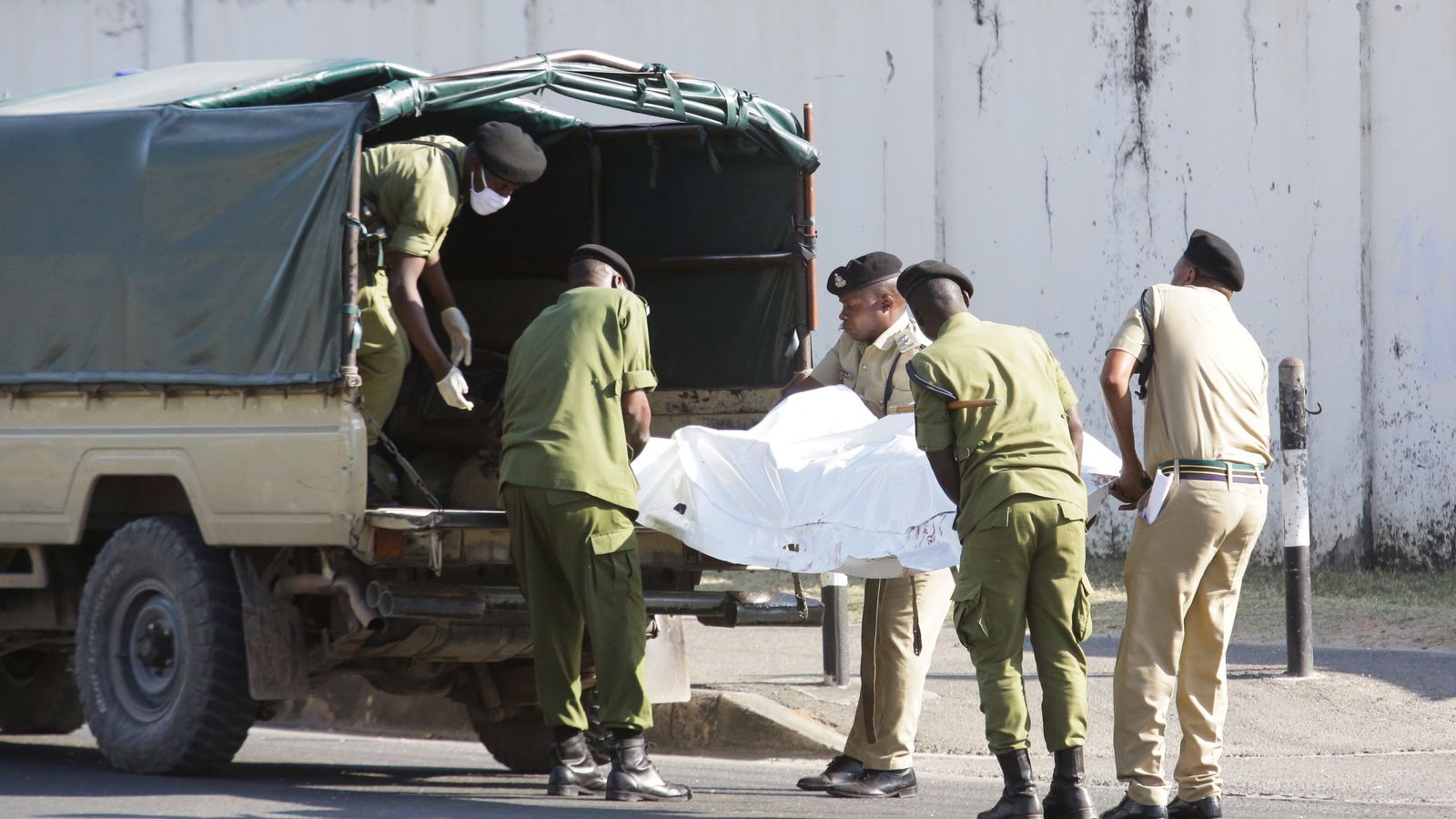 A gunman has killed four people during a shooting rampage in the diplomatic quarter of Tanzania largest city, Dar es Salaam.

Three police officers and a private security guard were fatally shot in the attack on Wednesday.

The assailant was later shot dead while holed up in a guardhouse at the French embassy's gate.

Inspector-General of Police Simon Sirro said the motive is not yet known but suggested the attack could be related to Tanzania's role in fighting Islamists in Mozambique.

Tanzanian troops were sent to the neighbouring country earlier this month to combat the insurgency as part of a regional security force.

Mr Sirro said in an interview aired on local television: "There are problems, our soldiers are there."

He also said police are working to identify the Dar es Salaam attacker.

Videos of the shooting have been shared online with footage showing the gunman inside the guardhouse - apparently filmed by onlookers from buildings across the street from the French embassy.

He exchanged fire at very close range with police and men who appeared to be embassy guards.

Police said the attacker had first shot two police officers with a pistol at an intersection in the district, which houses a number of diplomatic missions.

He took rifles from the fallen police officers, and headed on foot to the French embassy a few hundred metres away, firing randomly and occupying the guardhouse.

President Samia Suluhu Hassan said on Twitter that the attacker had been "neutralised" and "calm has returned".

"I send my condolences to the police service and the families of three policemen, and one officer of the SGA security company, who lost their lives after an armed person attacked them in the Salenda area of Dar es Salaam," Ms Hassan said.

Six people were injured in addition to the four who were killed, police commissioner of operations and training, Liberatus Sabas, said in a tweet shared by the account of the Tanzanian police force.

Mr Sabas told reporters it was too early to say whether the gunman was a Tanzanian national, or whether he had links to terrorism.

Tanzanian television aired footage showing police officers in bulletproof vests who appeared to be wrapping a dead body outside the embassy in white material to remove it from the scene.

SGA Security, which describes itself as a major security services provider in East Africa, did not immediately respond to requests for comment.

Earlier this year, Sky News was the first international broadcaster to reach the centre of the Mozambican town of Palma since it was ransacked by ISIS Mozambique, also known locally as al Shabaab. - Rebecca Speare-Cole, Sky News 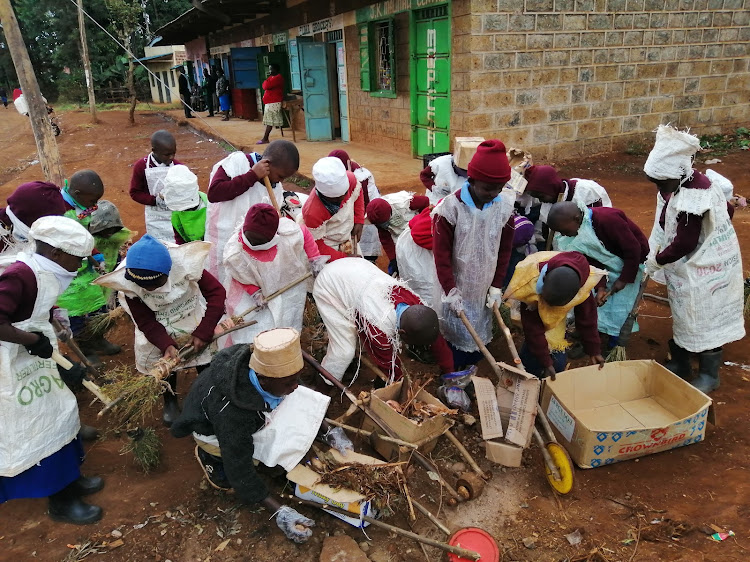 The demands of the Competency Based Curriculum have caused a massive reduction in hours teachers of English and Kiswahili spend with learners.

A report by curriculum materials providers Tusome shows schools have lost up to 30 lessons in English and Kiswahili since the rollout of the new curriculum.

Tusome was launched in 2014 to help learners in Grade 1, 2 and 3 to fluently read in English and Kiswahili.

“[However,] they have faced significant challenges following the 40 per cent reduction on instructional hours allocated to English and Kiswahili under the Competency-based Curriculum,” the report reads.

Learners’ ability to read in English and Kiswahili has significantly dropped on account of the fewer hours.

Under the CBC, learners take three Kiswahili and English lessons each week. In the 8-4-4 system, English and Kiswahili lessons were taught each day of the week.

About 70 hours of teaching and learning Kiswahili and English have been lost.

“Endline results found on average that teachers were around 30 lessons behind since the last evaluation,” the report reads.

The majority of the learners assessed were still struggling to read at least 20 words each minute correctly.

In Grade 1, 72 per cent of learners were not able to read at least 20 English words each minute while in Grade 2 some 46 per cent could not handle the same task.

Julius Jwan, the Basic Education principal secretary on Tuesday said that the government would review the timetable in schools to reclaim time lost for English and Kiswahili lessons.

Under CBC learners in lower primary take 35 lessons each week in nine subjects.

Mathematics, literacy activities, Environment get the highest allocation with five lessons each week.

Kiswahili, English, and Religious Education on the other hand have three lessons each week.

Hygiene and nutrition are taught twice each week while the Pastrol programme is taught once a week.

The exit of the Tusome project's financier USAID puts it in the hands of the government.

In the evaluation, 23 per cent of teachers further reported that English and Kiswahili lessons under the Tusome project were paced too fast.

Another 31 per cent reported a lack of materials as a challenge to a fluent reading of English and Kiswahili among lower primary learners. - The Star 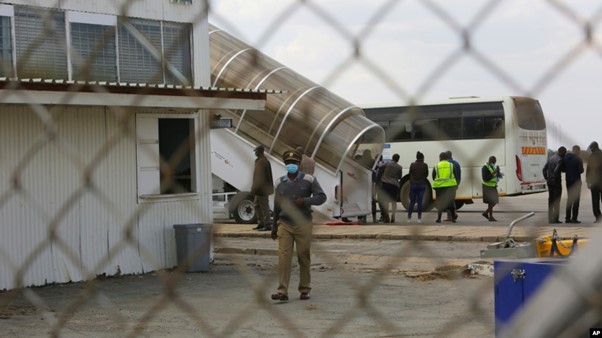 Britain, which deported 14 Zimbabweans a month ago, is on Wednesday expected to send back to the southern African nation at least 20 more people with criminal records.

Pardon Tapfumanei, an attorney representing some of the Zimbabweans targeted people, said the deportations are part of an agreement made by the President Emmerson Mnangagwa’s government and the United Kingdom for the forced return of people who committed crimes in Britain.

Tapfumanei said, “Those caught will be sent back home and everything depends on the status of their cases. Most of these people’s cases have been exhausted. They would have been rejected by the courts and gone through the court system two three or five years ago.

“They are filing new evidence in their cases with the intention of showing some change in circumstances of their cases. Each case will turn on its facts. Those that have been exhausted are submitting fresh evidence. You can make a new injunction. The British Home Office is looking into their submissions quickly. The decision usually it’s refusal.”

Tapfumanei has already submitted fresh evidence in cases involving some of the people that were also targeted for deportation last month.

“One of the clients did not go last time. We submitted new evidence and that saved him. The other one tested positive for COVID-19. Indications are that they are not deporting him. For this particular client, I have enlisted the services of the local MP (Member of Parliament) to ask the Home Office to defer his removal.

He (client) once dealt with drugs and had to commit offenses to pay for the drugs … Some of the cases have to be relooked at by the courts. We are doing injunction and judiciary review … Approaching the high court to stop the Home Office from removing them.”

The Home Office did not respond to inquiries over the latest deportations with indications that the United Kingdom is determined to deport a large number of Zimbabweans with criminal records.

In a tweet recently, the Home Office said there is no room for criminals in Britain.

The Home Office said the deportees were sentenced to a combined total of over 75 years in prison for various crimes, including rape and murder.

The British government, which has deported 7,985 foreign criminals from the United Kingdom since January 2019, says it wants to keep its communities safe from criminals. Indications are that the country is planning to deport at least 150 Zimbabweans per month, especially those that have committed serious offences and failed asylum seekers.

According to the Associated Press, some of the deportees had stayed in Britain for decades and forced to leave families behind to face an uncertain future back home.

Rights groups and politicians in Britain have mounted pressure to stop the deportations, arguing that the deportees are at risk of persecution in Zimbabwe.

The United Kingdom says it has a right to deport foreigners who commit serious crimes after they serve out their sentences.

Zimbabwean authorities have dismissed fears that the returnees would be persecuted. Although there are no exact figures, scores of thousands left Zimbabwe for the UK, the former colonial power, to escape a biting political and economic crisis at the turn of the century.

Many Zimbabweans whose bids for asylum were rejected by Britain also face deportation. VOA/The Associated Press also contributed to this article