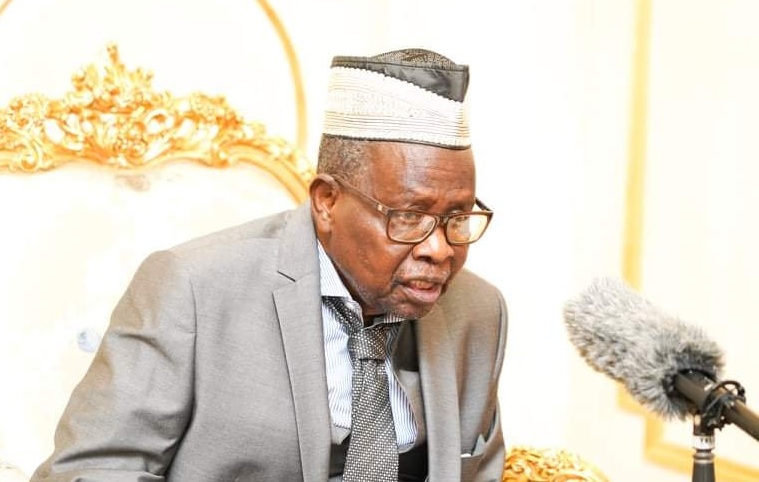 Veteran South Sudan politician and leader of the guerilla movement, Anyanya one, Joseph Lagu speaking to the media at the presidency. Photo via presidency

JUBA – South Sudan’s veteran politician and leader of the guerilla movement, Anyanya one, Joseph Lagu has called on his country’s political leaders to embrace peace and shun acts that can lead to the disintegration of African youngest nation.

Lagu made this call following his meeting with President Salva Kiir Mayardit at state house on Tuesday.

“God bless him (Salva Kiir) God bless the Country he is leading and God bless our neighbor and keep us friendly. No war amongst us and with our neighbors. Peace has come and it will stay now and forever,” Lagu said on Tuesday.

“I am very happy to come and see the President of our country, chat with him, and thanks to him for all that he has been doing to promote the affairs of our beloved country South Sudan,” he said.

The Former Vice President of Sudan urged the government to strengthen bilateral relations and cooperation with neighboring Sudan.

“I think, hope, and pray that our President Salva Kiir will live much longer and promote the affairs of his people and the nation as well as be friendly with our neighbors all around starting with Sudan, Egypt, and the rest of African countries,” he said.

He stressed the need to promote peaceful coexistence and stability to enhance sustainable development in the country.

“We are happy that he (President Kiir) is leading the people very perfectly well and when I return from Europe and saw the country, I could not realize that this was Juba we had seen before, it has completely changed starting from airport, it seems to be different country altogether,” he said. - Sudans Post 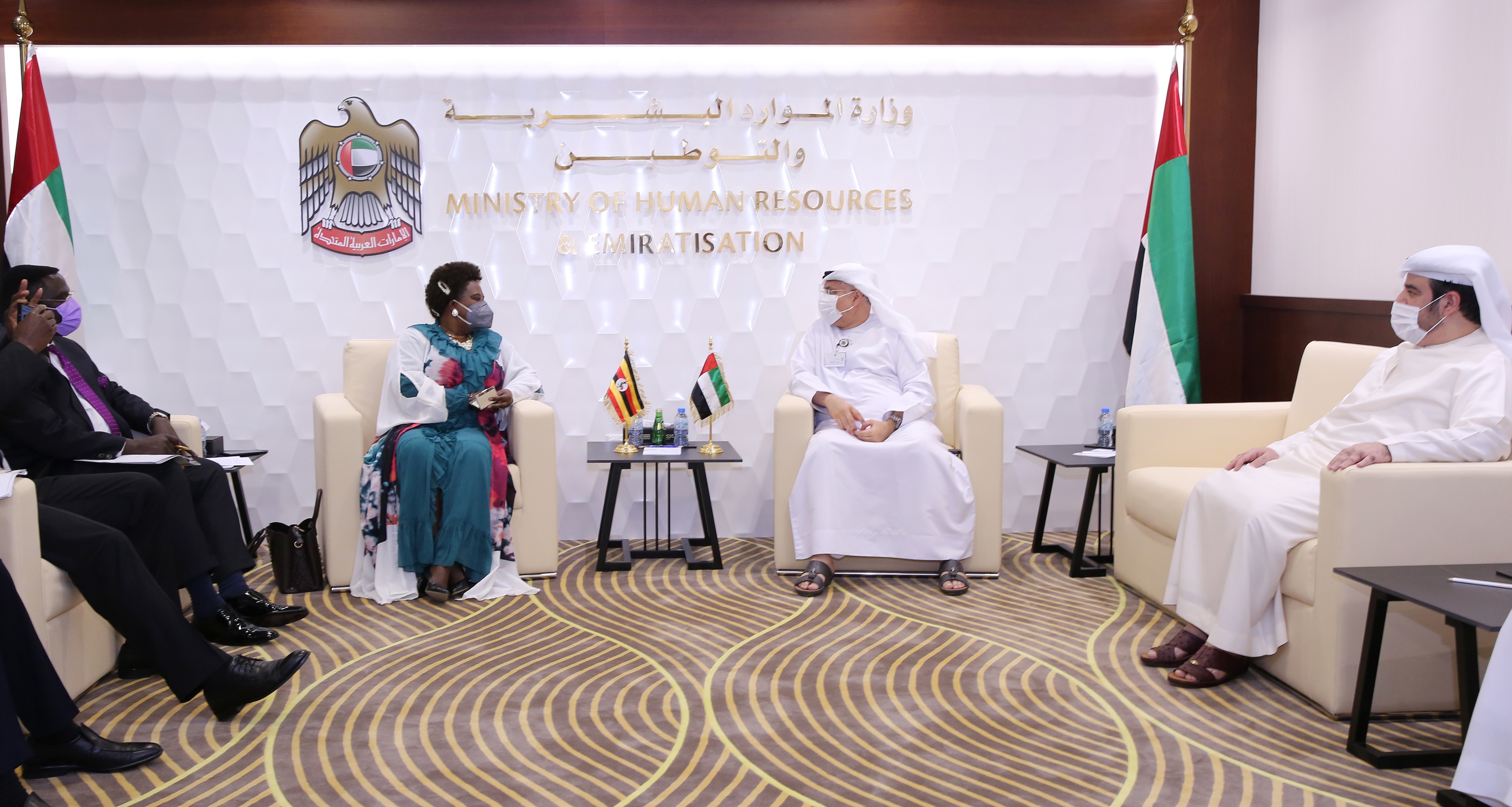 During the meeting, held at the Ministry of Human Resources and Emiratisation headquarters in Abu Dhabi, Dr. Al Awar presented the UAE’s new labour laws and talent acquisition policies.

Akena lauded the UAE’s advancement in areas of development, as well as its labour policies and efforts to ensure workers’ rights. She also highlighted her keenness to strengthen her country’s bilateral ties with the UAE. - WAM/Esraa Ismail/MOHD AAMIR 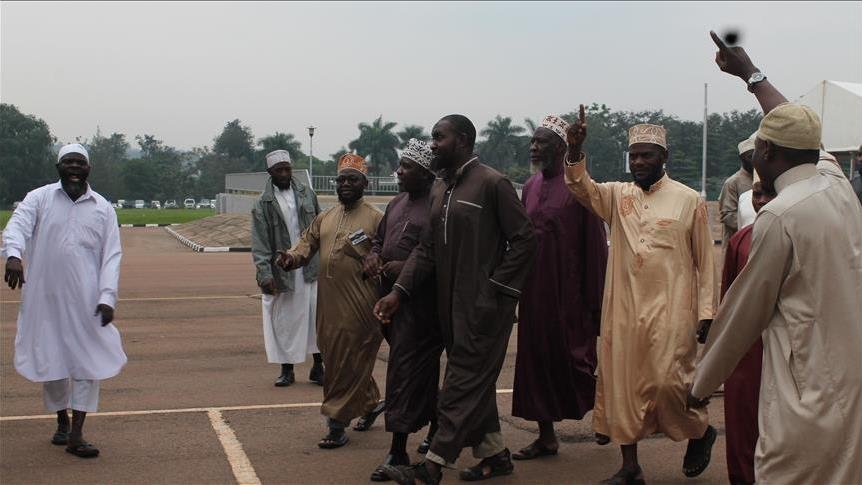 The Muslim community in Uganda is struggling to cope with the aftermath of twin suicide bombings that ripped through the capital last month.

The period following the attacks has been characterized by brutal arrests, abductions and killings of terror suspects who are largely Muslims.

The arrests riled tensions within the Muslim community.

Muslim cleric Salim Bbosa told his congregation at Masjid Jamia that he stopped teaching darusu classes at the mosque to avoid being mistaken for brainwashing young Muslims. In the classes, Muslim clerics and imams teach Muslims the norms of Islam and how to grow in the faith.

“With too much pain, I have indefinitely suspended all the darusu classes that I have been conducting in all the mosques and over other media platforms till a time when God shall keep us alive,” he said in a video message. “My appeal to all Muslims is to be patient and calm in the face of the prevailing situation in the country, avoid criminal acts and criminals.”

Bbosa’s classes are popular and mainly focus on social issues. He is among the few leaders that have come out publicly to speak about his fears. Other clerics have done the same quietly in recent weeks, for fear that they could easily be misinterpreted as brainwashing sessions.

Muhammad Swidiq, the imam of masjid Musa, told Anadolu Agency that his mosque indefinitely suspended darusu out of fear. There are reports of several mosques in and around Kampala that stopped conducting regular sermons for similar reasons.

Uganda Muslim Supreme Council Secretary-General Ramadhan Mugalu told Anadolu Agency that if a Muslim or another person has been accused of any crime, that person should be subjected to due process of the law.

He said that cases of disappearances of clerics should be reported to the office of dawa, or the propagation and preaching of Islam.

In a petition to the Uganda Human Rights Commission, the Muslim Center for Justice (MCJL) and the Network for Public Interest Lawyers requested that the commission open an investigation, hear and make orders and issue a report on the alleged extrajudicial killings of Ugandans by security forces.

He said Islam is a religion of peace and requested that security agencies stop linking Muslims to terrorists.

A motorcycle taxi driver was asked by Anadolu Agency why he suddenly stopped wearing his skullcap, which had become his identity. He said he and others fear being grabbed by security and drooped the skullcaps or anything that would expose religious identity.

Muhimbise George, a politician with the Alliance for National Transformation party, said it is unfortunate that Uganda has fallen to the scheme of demonizing Muslims as criminals and the Islamic faith is placed next to criminality.

“For the record, there have been many rebel outfits or groups that are led by Christians and they have never been tagged to Christianity. Alice Lakwena, a Christian armed rebel, led a violent Holy Spirit Movement, and her armed forces marched to Uganda’s capital Kampala, she was never called a Christian terrorist,” he said.

“One of the International Criminal Court’s most wanted, Joseph Kony and his cult-like Lord’s Resistance Army, took arms against the Uganda government. He claimed to be God’s spokesman, a spirit medium instructed by God to establish a theocratic state based on the Biblical 10 commandments. His atrocities stunned the world, he is accused of being responsible for the deaths of thousands of people in northern Uganda, to date, and he is never called a Christian terrorist,” he said.

George cited Joseph Kibwetere, a leader in the Movement for the Restoration of the Ten Commandments of God, a group that splintered from the Roman Catholic Church.

Kibwetere orchestrated one of the largest mass murders in modern history when more than 500 people were killed in Kanungu.

But Kanungu is not called a Christian terrorist, said George.

The killings are believed to be the second-largest cult murder after one that occurred in Guyana in 1978 when Peoples Temple leader Jim Jones instructed his members to commit "revolutionary suicide," by drinking poisoned punch. More than 900 people died, nearly one-third were children.

“There is a deliberate effort to blackmail Muslims as terrorists and unfortunately our leaders are either consciously or unconsciously falling for it. The danger it poses is that those that are stigmatized and harassed will feel a sense of insecurity and hence crave self-defense. In the end, they may turn into real terrorists as a response to the injustice and we may end up making terrorists in the name of fighting terrorism. We should stop the stigma against Muslims,” he added.

Imam Iddi Kasozi, a cleric and a lecturer at the Islamic University in Uganda (IUIU), told Anadolu Agency that the government should stop mistaking anyone carrying an Arab or Muslim name for a genuine Muslim.

He made reference to the brother of the country’s president, Gen. Salim Saleh Akandwanaho, who proudly carries the Muslim name but everyone knows he has never accepted the Islamic faith.

Salim and others disguised themselves as Muslims during a guerilla war which brought the current regime to power in 1986.

Addressing the country on the security situation on national television, Museveni said all those arrested or killed recently were legitimate targets for getting involved in activities that are aimed at destabilizing the country.

The president’s response followed critics on social media who said security forces were now back to their properly choreographed script of arresting Muslims whenever there was a terror incident.

Muslims in Uganda are a minority with 13.7% by official count by the Uganda Population and Housing Census 2015. Other sources suggest the number may be as high as 30%. - Hamza Kyeyune, Anadolu Agency