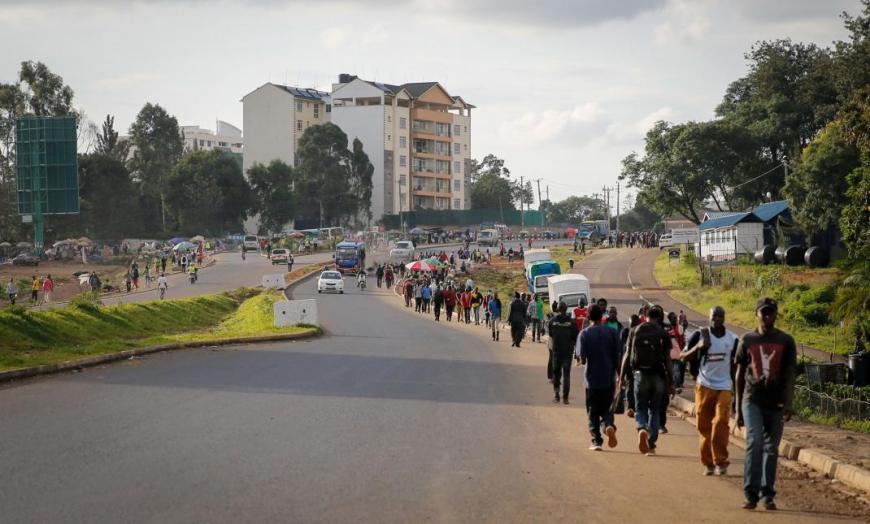 Kenya is one of the countries in East Africa and the world that has suffered a deadly blow from  COVID-19, which has recently swept across most parts of the world. Over 3 million people in the world have succumbed to the covid-19. Total number of covid-19 deaths in Africa has reached 123,627.  In Kenya coid-19 deaths has gone up to 2,850.

Kenya’s Health stakeholders in collaboration with the World Health Organization, among several other organizations have, and continue to recommend, administering and enforcement of safety measures, both preventive and curative, in an effort to flatten the infection curve, through launching of safety campaigns and implementation of these measures.

Recently, the Kenya’s Health CAS Dr. Mercy Mwangangi, officially reported the official onset of the third wave of the pandemic. Mwangangi says that the surge in the number of infections in the country and the entire East Africa serves as an indication that as a nation we have lowered our guard and completely disregarded caution, throwing it to the wind. Mwangangi recommends that since Kenya’s Health stakeholders have already communicated to everyone the existence of the third wave, Kenyans should all go back to the basics in response to the Covid-19 as set out by the Ministry of Health.

Over the last few months, the third wave of the deadly COVID-19 has claimed many lives in Kenya, not leaving out the elderly and the young. This has happened mostly due to the ignorance displayed by Kenyans towards both protective and preventive measures, their double standards in relation to these measures, failure to abide by the Ministry of Health (MoH) guidelines, among many other things. Many stakeholders have let down their guard, not leaving out stakeholders in the government who should lead by setting an exemplary standard.

Some of these measures include social distance, lack of physical contact and proper sanitization of both the body and surfaces we come into conduct with in our daily activities. On top of these measures, President Uhuru Kenyatta early last year directed a night- time curfew that ensured all businesses close at 9.00pm (EAT) to ensure that no activities such as drinking in clubs and bars happen at night.

President Uhuru Kenyatta tasked the Police to ensure Kenyans observe all set measures, guidelines and strategies put in place to flatten the COVID 19 infection curve. This ranges from the enforcement of the 8pm evening curfew, proper wearing of facemasks, maintaining of social and physical distance, avoidance and limitations of social gatherings and functions so as to curb the spread of the virus.

Some Kenyans, despite the indefinite closure of churches, a directive issued by President Uhuru Kenyatta last month, geared towards minimizing the spread of the pandemic, are still operating in churches beyond the recommended capacity. In a crackdown on the same, the   police stopped a live service in a church in Rongai.

The Kenya Police recently warned residents especially of urban centres, towns and cities across the country against defying curfew orders and COVID-19 regulations. Police Spokesman Owino Wahongo, in a televised interview said that police have been tasked under firm instructions This, among other measures have seen the Police also potentially facilitate transmission of the deadly virus from person to person while forcefully holding masses of people arrested past curfew hours in their temporary police quarantines.

Most people in such facilities that lack proper sanitation, protective equipment and food, and end up contracting the virus. Wahongo further said that Kenyans should avoid the last-minute rush to avoid ending up as culprits of the curfew. “We have seen so many who are caught everyday in the curfew. Kenyans should learn to prepare and do their things early” says Wahongo.

In a research, IEA News reached out to several police officers on this, and one of them, Amos Keitany, says that no one is perfect, ranging from both the police and the wananchi, as some police officers take bribes to cover up the citizens when caught on the wrong by the law. Keitany says Kenyans should not blame the authorities, especially the police for their failure to control themselves in regard to flattening the curve.

“As the police force, we cannot stop some habits that Kenyans have, as some will still shake hands, get close to one another beyond the recommended 1.5 metres social distance, still hide to attend church services and drinking sprees. Yes, they may never be caught, but prevention against the pandemic is more of a personal initiative” says Keitany.  “Some do not wear facemasks or wear them wrongly, or wear them because they do not want to cross paths with the law, rather than for their own safety.“ he adds.

Peter Kinuthia, a Nairobi resident, is a village head, and head of nyumba kumi in Embakasi. Kinuthia says that stakeholders in the transport industry, both the private and the public sector should also play their role towards flattening the curve. “Despite the social distance recommendation, matatus still ferry excess passengers, due to greed and their strive to cash in. Yes, we know they have loans to service and needs to meet, but even so, they should not risk the lives of other Kenyans.” He speaks.

Peter adds that some people still sit to eat in hotels and restaurants despite the ban and the regulation to strictly serve take-away meals. Some of these people do such things because they do not know the risk behind their actions. “The only remedy here would be the government, in collaboration with Kenya’s ministry of Health and other stakeholders to do more sensitization especially in rural areas. This should target their behaviors and measures that halt the spread of the pandemic.

Kinuthia adds that it is sad to see the government embracing overcrowding especially in the Railways Sector in Kenya. Before the president halted the movement of the trains in and out of counties within the East African state, Kenyans have been sitting in full capacity in the trains, both the meter gauge and the SGR. Peter says to avoid this Kenya government should introduce more trains plying through all routes to ensure passengers seat separately and safely.

“I wonder why the government should demand and enforce the aspect of social distancing in public service vehicles when they don’t lead by example themselves. They should be exemplary, leading us by practically walking the talk as other stakeholders emulate them.” Says Kinuthia, adding that halting down the spread and reducing the infection curve is both an individual and a collective responsibility as well, asking every Kenyan to be a partaker in the fight against the pandemic.

Cynthia Nkubitu says that Kenya's public transport vehicles have been deemed to be one of the most unsafe and the weakest towards the fight against COVID-19. “Matatus always carry passengers to their full capacity, with some even carrying excess and being badly driven, where that poses another risk of road safety in addition to COVID. I beseech the authorities to take action against them.

Cynthia adds that most of the matatus nowadays do not stock safety apparatus like hand sanitizers and hand washing equipment, as they used to do it to play safe to the police and not to protect the passengers, as it should be, but as it is a personal responsibility, passengers do have their own sanitizers.

Nkubitu supports the words by the Health CAS, Dr. Mercy Mwangangi, noting that Kenyans have let their guard down and dropped the ball as pertains protection against the virus, as some commuters have abhorred digital payment. “They still carry hard cash and do not care about the safety and the hygiene of the crew and the fellow passengers.

Starsight Energy announced its expansion into East Africa via the acquisition of a 50% stake in the East African operations of Premier Solar Group, a Commercial & Industrial (C&I) solar company with a focus on Sub-Saharan Africa and South Asia. The transaction will see the creation of Starsight Premier Energy Group which will offer sustainable power and cooling-as-a-service and battery storage solutions to C&I clients in Kenya, Uganda, Tanzania, and Rwanda.

Tony Carr, CEO, Starsight Energy: “We are excited to be partnering with Premier Solar Group in East Africa. The newly formed company will deliver significant financial capacity to the region’s energy efficiency market and offer new and existing clients an unprecedented opportunity to scale their sustainable power, cooling, and storage systems. Starsight Premier Energy Group will combine Starsight’s industry-leading service and technology with Premier Solar Group’s established footprint in Kenya. We look forward to bringing our unparalleled service and 99.9% uptime guarantee to new C&I clients in the region.”

Rupesh Hindocha, CEO, Premier Solar Group: “We welcome the partnership with Starsight Energy in East Africa. We knew instantly that Starsight would be the right partner for us because of their reputation for exceptional customer service, innovation, and sustainability. We look forward to continuing to deliver the standard of service and efficiency that has come to define the Starsight Energy and Premier Solar Group brands.”

Anyababa Ikem, Investment Manager, African Infrastructure Investment Managers: “We are proud of our investment in Starsight Energy and believe that this transaction only begins to scratch the surface of market demand for C&I solar solutions in Africa. Further expansion into some of the fastest growing African markets was a natural next step for Starsight, which has come to define the industry standard for distributed solar and cooling solutions in West Africa.”

Tosin Awoyinka, Senior Vice President, Helios Investment Partners: “Starsight Energy has become a market leader in West Africa because of its technology, service, and value proposition. The East African market represents an opportunity for Starsight to further demonstrate the universality of its power, storage, and cooling solutions. We look forward to supporting Starsight Premier Energy Group as it becomes the market leader in East Africa.” - Pie Kamau, starsightenergy.com

The UN Mission in South Sudan (UNMISS) has rehabilitated thousands of kilometres of roads in the country. Photo UNMISS/Emmanuel Kele

The aid worker was killed when assailants fired at a clearly marked humanitarian vehicle that was part of a team of international non-governmental organizations and South Sudanese health workers travelling to a health facility.

The team was driving from Chukudum to Kapoeta in Budi County in an area that has seen several roadside ambushes this year.

The UN Humanitarian Coordinator in South Sudan, Alain Noudéhou, has condemned the killing.

“I am shocked by this violent act and send my condolences to the family and colleagues of the deceased. The roads are a vital connection between humanitarian organizations and communities in need, and we must be able to move safely across the country without fear,” he said in a statement on Thursday.

“I call on the Government to strengthen law enforcement along these roads.”

The incident marked the first killing of an aid worker in South Sudan in 2021.  Nine aid workers were killed in 2020. - United Nations