Reporters Without Borders (RSF) calls for the immediate release of two Ugandan journalists, Pidson Kareire, the founder of the respected investigative news website Drone Media, and Darious Magara, a reporter for East African Watch, who were jailed on criminal libel charges last week without their bail applications being heard.

The two journalists have been charged in connection with stories they wrote last October and November about the reported failure of a construction company, Dott Services Ltd, to complete a government contract to build roads linking Uganda with the neighbouring Democratic Republic of Congo. Their reporting was based on statements made by legislators during several parliamentary hearings on the subject.

As a result of a libel suit filed by the company earlier last month, the police arrested the two journalists on 27 May and took them before a judge who ordered them detained until 17 June, when a court will hear their bail applications and begin hearing the case.

They were taken to Kitalya prison, a maximum security prison 50 km northwest of Kampala. Their lawyer told RSF they are facing possible two-year sentences under article 22 of the Ugandan penal code.

“It is incredible that these journalists have been imprisoned for nothing more than presumed defamation,” said Arnaud Froger, the head of RSF’s Africa desk. “As well as being totally disproportionate, this measure constitutes a serious constraint on the freedom to investigate and inform. We condemn the systematic harassment of Ugandan journalists in all its forms and we urge the authorities to release these two reporters at once, before the case is heard.”

It is not unusual for Ugandan journalists to be targeted when they do investigative reporting. Kareire was accused of defamation and “offensive communication” in 2019 after writing an article about Middle East Consultants Limited, a company that recruits Ugandan workers. The case was eventually dismissed.

Daily Monitor editor Tabu Butagira and Tony Glencross, the managing director of the company that owns the paper, were summoned for questioning this week for reporting that a BBC TV investigation had concluded that the Ugandan police fired live rounds indiscriminately at a crowd last November causing several deaths among the supporters of Bobi Wine, the main opposition candidate in the presidential election held a few weeks later. Uganda’s leading privately-owned newspaper, the Daily Monitor is constantly hounded by the government.

Uganda has fallen 28 places in RSF's World Press Freedom Index since 2015 and is now ranked 125th out of 180 countries. -  Reporters Without Borders

The South Sudan People’s Defence Forces (SSPDF) has denied that its soldiers were involved in the killing of a cleric and several other people in Lainya County of Central Equatoria on Tuesday, 1 June.

SSPDF spokesperson, Gen.  Lul Ruai Koang told Radio Tamazuj on Thursday that the National Salvation Front (NAS), led by Gen. Thomas Cirillo, are to blame and said the latter were the ones in control of the area where the killings took place.

“We have to tell the truth here. The incident took place in Gandari which is located in the northern part of Lainya and a distance of two hours walking. There are no proper roads in that area. The area is controlled by NAS and there are no citizens there and no church building as well. This is where NAS forces are based and they normally ambush commuters,” Gen. Ruai said.

Reminded that the Bishop of Lianya Diocese, Dr. Paul Yugusuk, directly accused the SSPDF of the killings, Lul said: “What the Archbishop is saying is not correct. We didn’t kill anybody but our chief of staff has promised to carry out an investigation into this incident and it will include SSPDF, CTSAMMVM, the church, etc. They are supposed to tell us the exact location where these people were killed.”

The SSPDF mouthpiece said their forces fought with NAS elements and captured the latter’s tents, plastic sheeting for sleeping, and goats.

“So the incident did not take place in Lainya. The incident was in Gumberi. It is clear that it is NAS who began attacking our position. Their commander, who was putting on a Wild Life or Prison Service uniform, instructed his forces to attack us. He was killed and his uniform is in our procession now,” Gen. Ruai said.

He accused NAS of waylaying innocent travelers, ambushes, kidnap for ransom, and torching vehicles in the greater Yei area.

On Tuesday, Archbishop Dr. Paul Yugusuk announced the killing of a parish priest of Gumbiri in Lainya and categorically accused the SSPDF of murders in the area.

The Archbishop also said that the SSPDF arrested one Mary Gaba Henry and her whereabouts are not known. He said the army looted goats, chicken, clothes, and cash in the Kuturjo residential area and burnt houses in Loka Round in Longera and areas of Darape, Lokirarat, Nyaporo, Kengwe, Rego, and Lomilikin.

“The SSPDF also arrested thirteen (13) youths in Rudu, eleven (11) of whom were released after serious beatings and they are even at the hospital. Businessmen David Bosco, Ojas Lokule Stuart, and Lomoro Lo-Bonjin of Lainya town have not been released to date,” Dr. Yugusuk said. “I call upon the chief of South Sudan People's Defense Forces, General Santino Deng Wol to immediately investigate the killing of cleric Cosmas Kwaje Matayo and other church members and arrest all those undisciplined soldiers who have committed the barbaric killings. I further call for the immediate release of all those who have been arrested.”

However, NAS, in a press release yesterday blamed the SSPDF for the killings in what is now becoming a blame game.

Suba Samuel Manase, the NAS spokesman said, “On 1 June 2021, the SSPDF, who are now operating under the orders of “shoot at sight”. In Gumberi Village of Lainya County, killed four (4), innocent civilians, in cold blood. Among those assassinated were Rev. Cosmas Kwaje Matayo, the parish priest of Gumberi parish, Simon Taban Elekima, a ten-year-old Sunday schoolboy, Moses Wani Daniel, a church elder and sub-chief and headman Benjamin Laki Jibidayo.”

He added, “These civilians were found in service in the church and dragged out and summarily killed because of their ethnicity. SSPDF are also committing the same atrocities in Kajo-Keji County.” - Radio Tamazuj 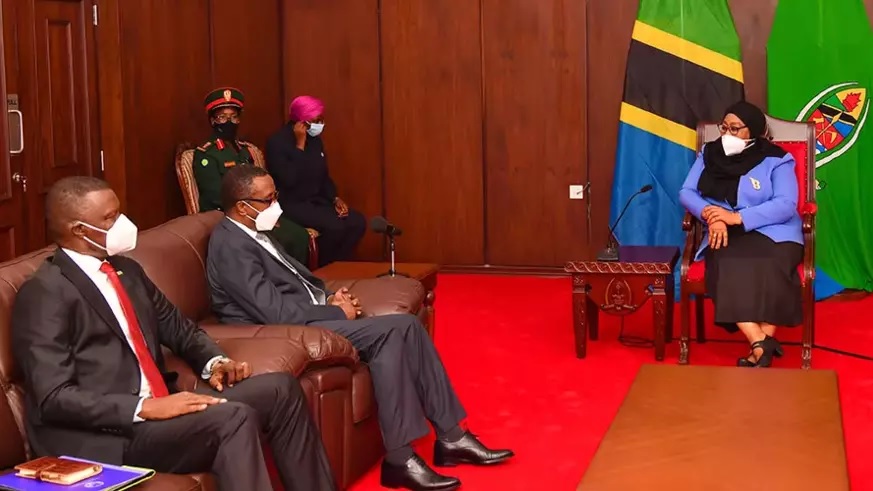 On Thursday, June 3, Foreign Affairs Minister, Dr Vincent Biruta was received by the President of Tanzania at State House Chamwino, in the capital, Dodoma, as he delivered President Kagame's message to his counterpart.

Shortly afterwards, Gerson Msigwa, the Director of Information Services and Chief Government Spokesperson of Tanzania, released a statement indicating that Kagame, among others, assured Suluhu who took oath on March 19, as the sixth President of her country that Rwanda is ready to further enhance the already good bilateral ties.

The Rusumo Hydropower Project was supposed to have been completed last year but it remains a work in progress.

Before the Covid-19 pandemic hit, Rwanda and Tanzania ministers held regular meetings as they looked to fast-track the 521-kilometre Isaka-Kigali SGR project to facilitate transport and trade.

Suluhu thanked Kagame for sending a special envoy who came with condolence and congratulatory messages, following the death of former President John Magufuli on March 17 and the former's subsequent swearing-in as the next Tanzanian leader, respectively.

She promised Tanzania’s readiness to further strengthening its relations and cooperation with Rwanda.

Other areas she wants the JPC to work on include improving the transport of fish fillets from Mwanza by Rwanda's national carrier, RwandAir, and speeding up the construction of a dry port in Isaka, in northern Tanzania. - James Karuhanga, The New Times