The Congolese government said it was evacuating Goma, a city of nearly 2 million people, after the Mount Nyiragongo volcano erupted. Lava reached the city's airport.

A volcanic eruption turned the sky red and brought a strong smell of sulfur to the streets of Goma, a city of nearly 2 million people in the Democratic Republic of Congo (DRC) on Saturday. Power was out in multiple locations throughout the city.

Thousands of people grabbed their belongings and fled towards the nearby border with Rwanda.

"I am taking the children and getting into the car. There is a risk that the lava will flow on Goma," a Goma resident told the AFP news agency.

The government has activated its evacuation plans for the city, spokesman Patrick Muyaya said on Twitter.

"The situation is deteriorating," an official from Virunga National Park, where the volcano is located, told his staff in a memo.

Congolese President Felix Tshisekedi said he would "interrupt his stay in Europe to return home this Sunday to supervise the coordination of aid."

Officials confirmed an eruption at Mount Nyiragongo. The volcano last erupted in 2002, with some 250 people losing their lives and lava destroying approximately one-fifth of city, including airport runways. Hundreds of thousands were evacuated. 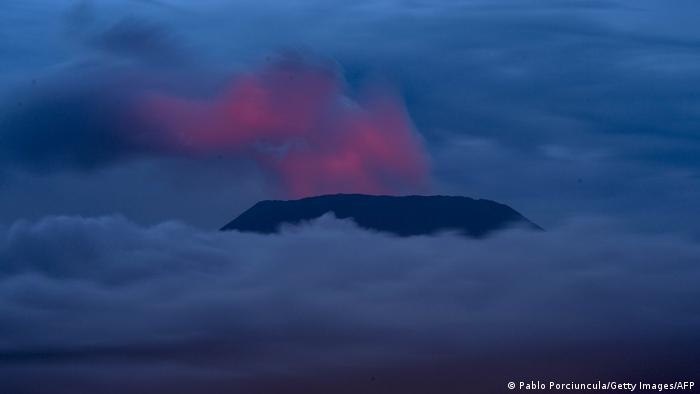 The deadliest eruption of the Nyiragongo volcano was in 1977, when over 600 people died

Goma-based volcanologist Dario Tedesco initially told Reuters news agency that the city did not appear to be at risk, but later Saturday a second fracture opened in the volcano, allowing lava to flow towards Goma.

"Investigations are underway and people must follow the guidance of civil protection," he said.

Witnesses, though, said lava had engulfed one highway that connects Goma with the city of Beni in North Kivu province and had reached Goma's airport.

The Goma region, in DRC's North Kivu province, has six active volcanoes. All of them are higher than 3,000 meters (9,843 feet).

Earlier this year, researchers working at the Goma Volcano Observatory reported signals that an eruption might be on the way. However, the observatory has been struggling to maintain its operations after the World Bank pulled funding over embezzlement claims.