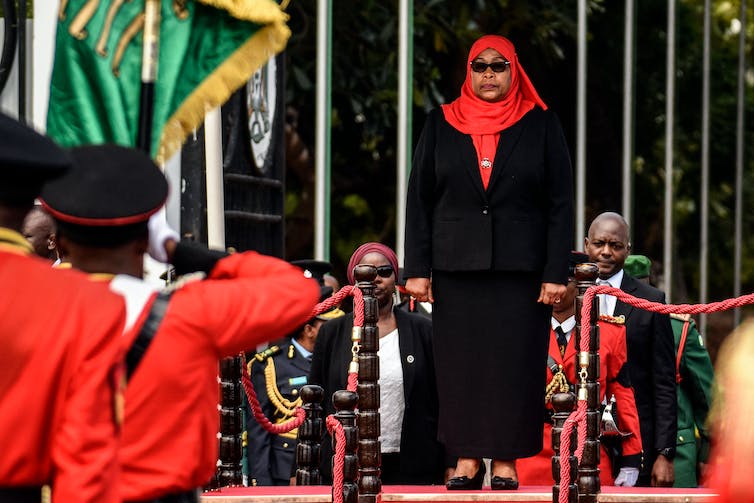 Samia Suluhu Hassan becomes the first female president in Tanzania taking over from President John Magufuli who died on 17 March 2021.

Born in 1960, she hails from Makunduchi, an old town on Unguja island, in Zanzibar. Her father was a teacher and her mother a housewife. After graduating from high school she studied public administration and later obtained a Masters in community economic development.

She began her political career in 2000 when she was elected as a special seat member in the Zanzibar House of Representatives. Special seats are reserved for Tanzanian women leaders under the country’s quota system.

Then in 2010, she was elected member of parliament for Makunduchi, sitting in the National Assembly of Tanzania, and was appointed minister of state for union affairs by President Jakaya Kikwete.

She rose to the national limelight when she was elected to serve as vice chairperson of the Constituent Assembly. The assembly was a body of stakeholders brought together in 2014 by President Kikwete to discuss Tanzania’s proposed new constitution. It was led by Chairperson Samuel Sitta, a former Speaker of the National Assembly.

The Constituent Assembly, which was dominated by the ruling Chama Cha Mapinduzi party was tasked to discuss and debate Tanzania’s draft constitution. Kikwete had initiated a constitutional review process in 2010 with the promise to have a new constitution through a popular process.

A new constitution has yet to be passed, with many in the establishment, including Hassan, preferring to maintain the status quo.

The Chama Cha Mapinduzi presidential nomination of 2015 was a tight contest. After the party’s National Executive Committee votes were counted, three candidates were selected; John Magufuli and two other women – Asha-Rose Migiro, a Tanzanian who had served as the United Nations deputy secretary general, and Amina Salum Ali – a Zanzibari who had served as permanent representative of the African Union to the United States.

In the end, John Magufuli was nominated as a compromise candidate. He was viewed as candidate who could walk the middle line in a party that had been divided by competing interests.

Because there were two female finalists during the nomination process, it was deemed appropriate for Magufuli to nominate a woman as a running mate at a time when the country was already making great strides towards gender inclusion. Five years earlier, in 2010, Anna Makinda had broken barriers by becoming the first female speaker of the National Assembly.

Magufuli went ahead and nominated Samia Suluhu Hassan as his running mate. With Magufuli’s victory in the 2015 general elections, Hassan became the first female vice-president.

As vice-president, Hassan served as the principal assistant to the president. Her role should have been largely ceremonial. But when she assumed office, she represented Magufuli at many international meetings and engagements. These included the East African Community and Southern African Development Community summits.

This was because the late president rarely traveled abroad. As a result she has received immense international exposure, a factor that could influence how she governs going forward. An expected impact of this exposure will be to redress the international isolation Tanzania experienced during the Magufuli administration.

She was the most senior government official who visited him, which is worth mentioning because Lissu had blamed the government for the attempt on his life.

Hassan conveyed Magufuli’s greetings. Her visit was symbolic because it sent a message of goodwill. It was an attempt to bridge the growing antagonism between the government and the opposition. Her candour and grace as she leaned in to speak to Lissu on his hospital bed reminded Tanzanians of the value of humanity and the true spirit of Tanzanian camaraderie.

She has been described as compassionate, rational and calm -– attributes that are a far departure from her previous boss.

In the six years that Magufuli was president, the country became very polarized and divided.

His handling of the opposition and the COVID-19 pandemic only served to sow more discord among the Tanzanian people. And under Magufuli, Tanzania became increasingly isolated internationally.

Hassan’s international exposure could offer her the kind of worldview that is required to put Tanzania back on the diplomatic map. In her address after being sworn in as president on 19 March 2021, she spoke on the need to bury differences and show solidarity as a nation.

Hassan’s candour and rationality could be vital in moving the country forward. She should move in quickly to change the country’s stance on COVID-19 and reach out to the opposition and other stakeholders so as to build an inclusive national dialogue.

This article is republished from The Conversation under a Creative Commons license. Read the original article.