Royalist is The Daily Beast’s newsletter for all things royal and Royal Family. Subscribe here to get it in your inbox every Sunday.

Prince Harry faces a life of permanent “exile,” with King Charles plotting to follow the playbook drawn up by the royals as they overcame the crisis triggered by Edward VIII, the king who abdicated in 1936 and was obliged to live the rest of his life outside the U.K., The Daily Beast understands.

A friend of the king’s told The Daily Beast: “The royals handled the abdication crisis by exiling Edward which meant he and Wallis ultimately came to seem like unimportant, misguided, disloyal, and even treacherous individuals to almost the entirety of the British people. It was a masterful operation in the service of which the Queen Mother, in particular, worked tirelessly.

“The same thing is already happening with Harry and Meghan, and will only gather pace over the next few years under the rule of King Charles. And of course a wayward second son is far less of an existential threat to the fabric of the monarchy than a wayward king.”

Another source, a former Buckingham Palace staffer, told The Daily Beast that King Charles’ accession statement, in which he encouraged his son and Meghan to “continue to build their lives overseas” was an undisguised message to them to not disrupt his reign by making frequent trips to the U.K.

“Harry and Meghan will get an invite to the coronation but they will be firmly seated in the cheap seats along with Beatrice and Eugenie, as they were at the funeral. That will be it. Charles will be ruthless when it comes to protecting the Crown, and that means keeping Harry and Meghan as far from the center of gravity as possible,” the former staffer told The Daily Beast.

The news follows the revelation, reported by the Sun Thursday night, that Harry snubbed Charles’ offer of dinner the night he was at Balmoral following Queen Elizabeth’s death, after Charles had forbidden Meghan from joining Harry at Balmoral.

Instead of joining Charles, Camilla, and William for supper at Charles’ home on the Balmoral estate, Birkhall, Harry stayed with Prince Andrew, Prince Edward and wife Sophie at Balmoral Castle itself.

A source said: “Harry was so busy trying to get Meghan to Balmoral and rowing with his family that he missed the flight. Charles has an open invitation for Harry to dine with him whenever he is in the country. But Harry was so furious that he refused to eat with his father and brother. It was a massive snub. And he got out of Balmoral at the earliest opportunity to catch the first commercial flight back to London.”

Although it was the couple themselves who made the decision to go and live in America, they have eyed a transcontinental role for themselves. As they said, in their first departure announcement, “We now plan to balance our time between the United Kingdom and North America.”

They were equally open about their desire to continue to “represent” the monarchy while being able to earn their own money. 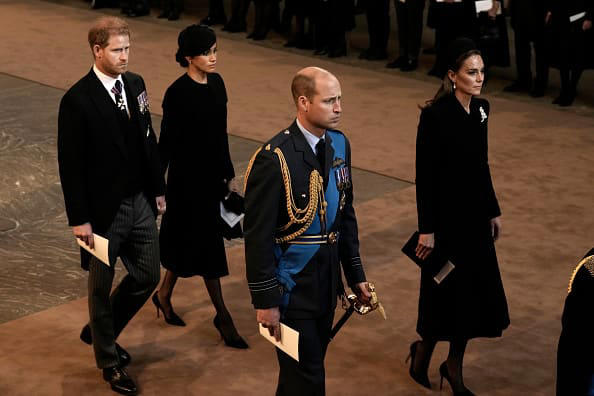 Prince Harry, Meghan Markle, Prince William, and Kate Middleton walk behind the coffin as they arrive in the Palace of Westminster after the procession for the lying-in state of Queen Elizabeth II on Sept. 14, 2022, in London. Nariman El-Mofty-WPA Pool/Getty© Provided by The Daily Beast

This plan was rebuffed by the queen at the so-called Sandringham Summit, where the couple were told they could have no role in public life as part-time royals.

A palace statement at the time said that the queen had told the couple “that in stepping away from the work of the Royal Family it is not possible to continue with the responsibilities and duties that come with a life of public service.”

In response, Harry and Meghan basically said, “Oh yes we can,” issuing a statement that read: “We can all live a life of service. Service is universal.”

While the queen did not order them to live overseas, as far as is known, the shutdown of travel caused by the pandemic, which struck the world just weeks after they quit the royal family, and the birth of baby Lilibet, essentially parked the question of them traveling back and forth to the U.K. for two years.

Little surprise that Vanity Fair’s Katie Nicholl, in her new book The New Royals, says that William and Kate felt “relief” when Harry and Meghan announced their decision to move to the U.S., because they felt that the “drama was gone.”

However the idea, widely assumed, that they have given up the idea of having a significant role in British public life is not accurate. Indeed, Harry has made it explicitly clear in a legal action he is bringing against the British government, seeking automatic police protection when in the U.K., that he still sees the U.K. as his home and wants to operate here.

In a submission made in January this year, Harry’s legal team said: “The U.K. will always be Prince Harry’s home and a country he wants his wife and children to be safe in. With the lack of police protection, comes too great a personal risk.”

At a February court hearing, Harry’s barrister said: “It goes without saying that he does want to come back to see family and friends and to continue to support the charities that are so close to his heart.”

The idea of Harry popping back over every few weeks to do public appearances is likely to give Charles the chills.

So while the decision about Harry’s security is, strictly speaking, a matter for the courts, it is probably safe to rule out the establishment pulling any strings to get Harry what he wants.

Charles’ advisers will be mindful of the fact that when Harry and Meghan dropped into the U.K. at the beginning of this month, having announced what was supposed to be a four-day whirlwind trip supporting charities “close to their hearts” (that phrase again) it completely dominated royal newsfeeds for days on end.

That trip became the subject of intense irritation at the palace, with insiders annoyed at the couple undertaking engagements that looked indistinguishable from their former royal duties.

Then, of course, the queen died, meaning that the four-day excursion became a two-week-plus epic—the couple finally flew home to their children on Tuesday, Sept. 20, Page Six reported, having arrived, it is thought, on Sunday, Sept. 4. 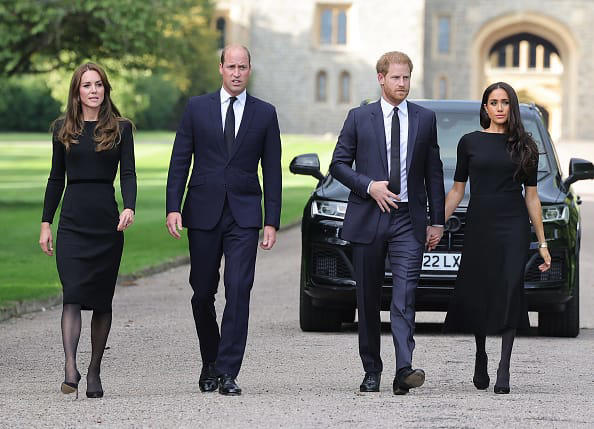 Kate Middleton, Prince Harry, Prince William, and Meghan Markle on the long Walk at Windsor Castle arrive to view flowers and tributes to the queen on Sept. 10, 2022, in Windsor, England. Chris Jackson/Getty© Provided by The Daily Beast

One reasonable interpretation of Harry’s treatment in the days after the queen’s death and at her funeral is that it was part of a strategy of chipping away at Harry’s importance, of reframing him in the public eye from being, “Prince Harry, sixth in line to the throne” to “Prince Harry, minor, non-working royal who lives overseas.”

If Harry and Meghan had sought to blur the lines, via charitable commitments, between their present identity as private citizens and their former identity as royals, the last two weeks offered the palace an unprecedented opportunity to render them again in sharp relief.

The most explicit illustration of this was in the seating arrangements at the queen’s funeral which, humiliatingly, denied Harry a front-row seat in favor of his cousins Peter and Zara Philips. Palace sources have insisted that the seating was decided purely in order of age and that there was “no snub” involved.

Harry’s expression and his reluctance to sing “God Save the King” suggested that he saw things otherwise, understanding all too well that for the second son of the king to be second-rowed in favor of his cousins on the basis of his age was, if not a snub, certainly a massive recalibration of the royal pecking order, which traditionally has accorded privilege on the order of precedence.

This was just one final reminder of Harry’s new lowly, outsider status. The tone was set on the day of the queen’s death when no seat was found for Harry on the military jet that conveyed William, Andrew, and Edward to the queen’s deathbed in Scotland, with Harry instead being forced to take a privately chartered prop plane from a civilian airport, Luton, over an hour from London, and being told of his grandmother’s death just five minutes before the world at large was informed.

After either not being invited to dine with Charles, or—as the Sun reports—refusing, Harry left Balmoral early to fly home on a scheduled BA service. He was subsequently ordered not to wear uniform for any of the ceremonial events before Charles highlighted the fact that it was completely in his gift to allow him to wear uniform, had he been so minded, by ordering Harry to wear uniform during his vigil for the queen.

Prior to the queen’s death, tempers had been stirred by Meghan’s inflammatory interview with The Cut in which she implicitly threatened to release more secrets about her time in the royal family.

However, there is a perception in the palace that Meghan’s attacks on the monarchy can be shrugged off and that they are failing to cut through. The all-important British audience appears to have largely decided she is not credible, principally due to the fact that she has made some bizarre claims in interviews, such as her inexplicable comment comparing her wedding to the freeing of Nelson Mandela, which the British media have then jumped on, and made a huge show of forensically pulling apart.

Harry represents an entirely different level of threat. There is genuine nervousness about the impact his memoir—now thought to be delayed in the wake of the queen’s death, but that has not been confirmed—could have on the king if he decides to launch a serious attack on Charles, which many insiders fear he will.

One explanation for the relentless messaging over the past two weeks that Harry is now firmly outside the royal club, and so are his offspring, could be that it is to undermine Harry’s status as the ultimate insider before the book comes out.

Prince Charles’ office declined to comment on the claims made in this piece when contacted by The Daily Beast.

While there is no reason to doubt, on a personal level, the unofficial line from the palace that Charles loves Harry and wishes nothing more than to be reconciled with his son, the personal will now come a distant second to Charles’ top priority; preserving the Crown.

Harry and Meghan are a huge distraction that the royals don’t need. Charles wants them out of sight and out of mind. So he is likely to feel far more comfortable if Harry and Meghan are safely on the other side of the world—for ever and ever, amen. By Tom Sykes, The Daily Beast