Armed security guards at Kakuzi, a farm north of Nairobi which is the size of Manchester, are accused of committing human rights abuses between 2009 and January 2020

The Kent-based owner of a massive Kenyan avocado farm which supplied British supermarkets until last year has settled claims of human rights abuses with 85 alleged victims for up to £4.6million.

Armed security guards working at Kakuzi, a 54-square mile farm north of Nairobi, are accused of committing abuses between 2009 and January 2020.

The allegations include that farm guards beat a 28-year-old man accused of stealing avocados to death, raped 10 women and committed dozens of brutal attacks on people in nearby villages.

Camellia, which is valued at £180million and has a majority stake in Kakuzi, will spend up to £4.6million on the settlement, including compensation, legal costs and funding schemes for the community.

The original claim, lodged in the High Court in London by British law firm Leigh Day, was for 79 alleged victims of human rights abuses. However, Camellia expanded the payout to include those who came forward after the initial lawsuit, including a man maimed by guards.

One of the barristers instructed in the case was Amal Clooney, the wife of Hollywood actor George Clooney. 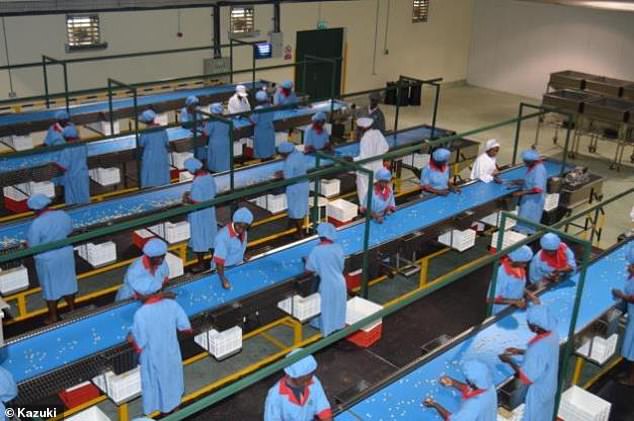 Camellia, which is valued at £180million and has a majority stake in Kakuzi, will spend up to £4.6million on the settlement, including compensation, legal costs and funding schemes for the community. Pictured, workers on the farm north of Nairobi

Swaleth Githinji, who runs human rights organisation Ndula Resource Centre, told the paper: 'For the victims of human rights abuses this is a big win.'

But he added: 'The lack of a public apology shows that Camellia and Kakuzi are not committed to the long-term resolution of these issues.'

Daniel Leader, a partner at Leigh Day, told MailOnline: 'The settlement the parties have reached provides individual compensation for the claimants, who have claimed damages as victims of human rights abuses, but also guarantees a substantial package of additional measures which will help the numerous communities which surround the Kakuzi farm.

'Most importantly, Kakuzi has agreed to construct three new roads which will significantly improve the ability of local residents to access local public services and amenities.

'Kakuzi has also agreed to put in place a comprehensive grievance mechanism which will deal with any other human rights complaints in the future and will be subject to independent oversight.

'The Claimants hope and anticipate that this settlement will lay the foundation for an improved dialogue and relationship between Kakuzi and their communities in the future.'

Camellia pointed to a statement made by Kakuzi last year where it said it was apologising 'to all the stakeholders about the current circumstances'.

A spokesperson told MailOnline that Kakuzi guards are armed with sticks, not guns - as original reports said. They also said that security guards in that part of Africa are frequently killed as they go about their job.

The company added that Leigh Day has agreed 'not to begin or support' any other claims over Camellia's Kenya operations 'for a substantial period'.

In a statement, Camellia said: 'The settlement is intended not only to resolve the claims themselves, but also to help Kakuzi to strengthen its relations with the local communities and to continue to support the thousands of smallholder farmers who rely on Kakuzi to get their avocados to market.

'In particular, Kakuzi's Operational-level Grievance Mechanism ('OGM') (which was announced in October 2020) will be developed and implemented, with wide-ranging stakeholder consultation.

'The companies have reached this resolution because it is the best way of supporting Kakuzi in continuing its long-standing and important work with the communities on and around the Kakuzi farm, which includes comprehensive outreach, CSR and engagement initiatives such as maintaining and supporting local schools, and providing medical facilities for employees and their families, and medical outreach programmes to the local communities.'   By JACK WRIGHT FOR MAILONLINE