Gunmen stormed a market in Nigeria and opened fire in 'every direction' killing at least 30 on Sunday evening.

The assault, from a suspected criminal gang, started during a weekly market in Goronyo, northern Nigeria, Sokoto Governor Aminu Waziri Tambuwal said in a statement.

Gunmen surrounded and entered the market while it was full of shoppers and traders on Sunday evening before opening fire 'sporadically' on onlookers, spraying the crowd with bullets, witnesses said.

A regional government spokesperson said the death toll was not yet confirmed but was believed to be '30 something'. However, a local resident said there at least 60 bodies at Goronyo General Hospital mortuary.

Heavily armed gangs known locally as bandits have terrorised northwest and central Nigeria for years, raiding and looting villages, but attacks have become even more violent in recent months.

The gangs have no known ideological agenda but operate in an area where concerns are growing of jihadist inroads.

Gunmen, from a suspected criminal gang, (not pictured) stormed a market in Nigeria and opened fire in 'every direction' killing at least 30 on Sunday evening

'We're not sure of the [death toll] figure. But it is 30 something,' Sokoto's government spokesman Muhammad Bello said in a statement.

'It was a market day and there were many traders,' Bello told AFP by phone.

But Iliyasu Abba, a local resident and trader, told Reuters that there were 60 bodies at Goronyo General Hospital mortuary, while others sustained injuries while escaping.

'The gunmen stormed the market as it was crowded with shoppers and traders,' he said.

The men were 'shooting sporadically on us after they surrounded the market firing at every direction killing people.' 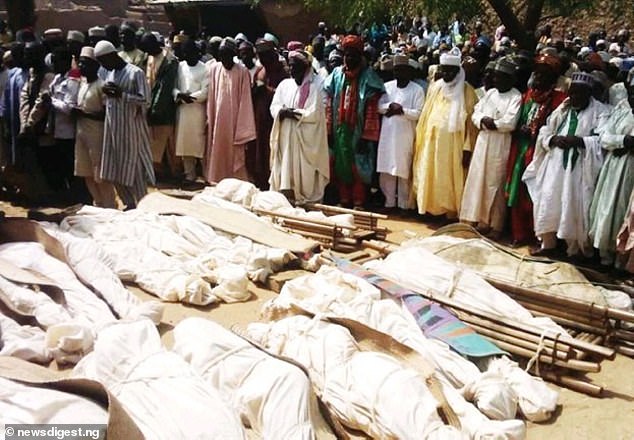 Abba said the gunmen had at least initially overpowered police who tried to intervene.

'Our sercurity operatives are there to conduct investigations,' Abubakar said, without giving details.

Phone networks in the area have been suspended for weeks to disrupt the gangs' operations, making information-gathering tricky.

A gang raided another village market on October 8, in Sabon Birni district near the border with Niger, killing 19 people.

Since last month, Nigerian troops have been conducting air and ground operations on bandit camps in neighbouring Zamfara state.

The government ordered shut all telephone and internet services in the whole of Zamfara state in early September, a blackout later extended to parts of Katsina, Sokoto and Kaduna states as military operations intensified. 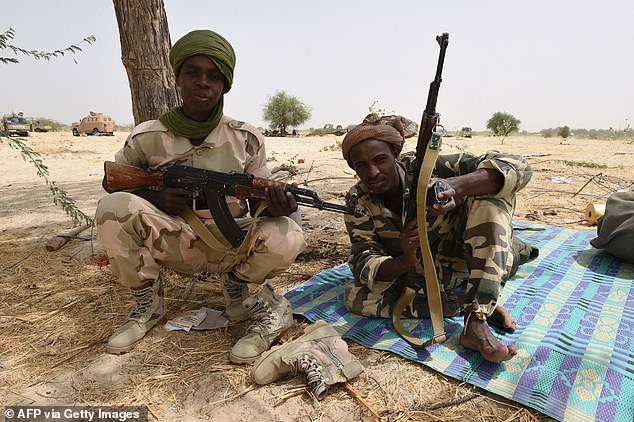 The government ordered shut all telephone and internet services in the whole of Zamfara state in early September, a blackout later extended to parts of Katsina, Sokoto and Kaduna states as military operations intensified (pictured, soldiers near the Chad-Nigeria border)

Officials in Sokoto are worried that bandits are relocating to the state as a result of operations in Zamfara.

'We're faced and bedevilled by many security challenges in our own area here, particularly banditry, kidnapping and other associated crimes,' wrote Bello, on behalf of the state governor.

Governor Aminu Waziri Tambuwal, he said, had requested 'the presence of more forces in the state and the deployment of more resources'.

Last month 17 Nigerian security personnel were killed when gunmen attacked their base in Sabon Birni, an assault the military blamed on Islamic State-aligned jihadists. 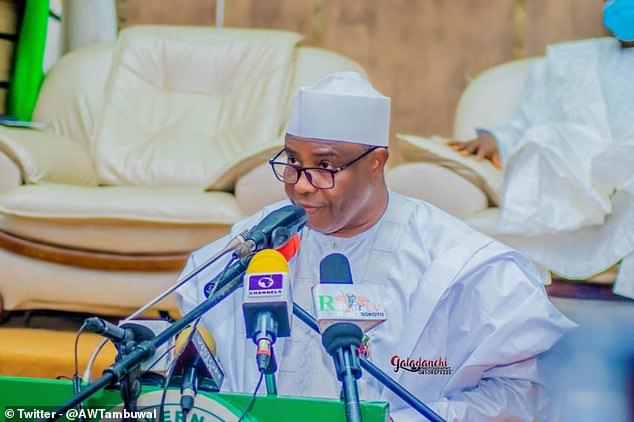 Governor Aminu Waziri Tambuwal, he said, had requested 'the presence of more forces in the state and the deployment of more resources'

Violence has spiralled in recent months across the northwest, forcing thousands of already vulnerable people to flee their homes in a situation that aid agencies fear risks becoming a humanitarian crisis.

Since January 2020, about 50,000 people fled from their homes in the northwest alone, according to the International Organization for Migration.

And more than 80,000 additional people have fled to neighbouring Niger over the past two years.

Increasingly, bandits have turned to mass kidnapping and have kidnapped hundreds of schoolchildren since December. Most have been freed or released after ransom but dozens are still being held.

The violence is just one challenge facing Nigeria's security forces, who are also battling a 12-year jihadist insurgency in the northeast that has killed more than 40,000 people.  By LAUREN LEWIS FOR MAILONLINE and WIRES, Mail Online